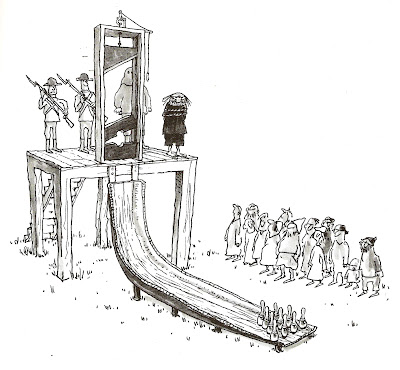 Bowling's Dark Beginnings
Few people could ever imagine the historic link between the Guillotine and the popular sport of bowling.

Get prepared for a "heads up" (pardon the pun) on bowling's dark beginnings.

This Blogger got curious about the sport of bowling. This curiosity, you might say, got stuck in my head.

To be honest, it was the cartoon at the left (by George Booth) that planted an epiphany that there just might be a connection between the Guillotine and the earliest known forms of a sport that evolved into today's bowling.

Many references cite the English game of Skittles as an early form of bowling. I'm skeptical of that link, because I fail to see how modern bowling could have possibly been derived from a candy resembling "m&ms" without the "m's." (As you see, I've used my head while putting this post together.

That English game shares it ancestry with an outdoor lawn game known as "bowls," which in turn dates back to other forms of bowling as far back as ca. 3300 BCE in ancient Egypt.

What's That on the Ground ... a Head?
Popularized by Heads of State during the French Revolution, the guillotine was used as a "humane" way of executing criminals and enemies of the French government and the monarchy. The condemned became known as head cases.

Initially, in order to make a statement, French officials forced the families and friends of those to be executed to gather to watch the heads roll. Probably out of morbid curiosity, people began to voluntarily show up for the executions.

These public executions would become beneficial for the economy and were a source of employment for some of the peasants. Carpenters were needed to build the frames of the guillotines. Blacksmiths were in demand for their skills of forging the blades for the devices. Then there was the position of the executioner himself! Although plying their trade in anonymity with hoods over their heads, these men came to be known as headbangers.

In time huge crowds were known to show up for these public executions. Ironically, watching people lose their heads had become a spectator sport. Not passing up on a chance to make a buck franc, high ranking French officials began to charge admission for the events. Tickets not having been yet invented, there arose a need to keep track of the gate receipts. This was solved by hiring individuals to record the number of attendees by a method known as the head count.

At times there would be multiple executions and families would gather to spend an afternoon at the beheadings, which in time would come to be known as headers. (The first time two people were executed on the same day was important because it was the first known instance of a double header.)

Soon lists of the condemned were being published several days before the scheduled executions. Ranked by the severity of their crimes, those at the top of the lists became known as headliners.

In later years the fear of this form of capital punishment would result in fewer and fewer crimes against the state. Eventually the people began to lose interest in these public executions by the guillotine. Seeing a decline in attendance officials began to sentence people for lesser crimes. Even innocent people were being arrested just so the officials could get ahead.

In order to hold public interest and to keep gate receipts at profitable levels, new variations of the executions had to be developed. One heady idea was to use a basket, but this was scrapped until many centuries later when a man named Naismith would use the basket as a target for a thrown ball.

Then someone got the idea to elevate the guillotine above a sloped ramp called a headway. The head would then be allowed to roll down the ramp until it struck a vertical wooden wall called the headboard. It wasn't long before it came evident that the crowds would find this version to be boring. One solution was to dig a large hole in the ground somewhere beyond the end of the ramp, the object being for the head to fall into the cup. (The Scotch found this interesting and would one day incorporate a hole in the ground to a game that would one day be known as golf.)

One fateful day, just for laughs, someone placed ten wooden pins at the end of the headway, which would later be known as an alley. The crowds loved watching the heads strike the pins! They began to wager amongst themselves as to how many pins would be felled. Of course in time they front pin became known as the headpin.

Centuries later the guillotine would be phased out and no longer used and several games inspired by the beheadings survived and evolved into the sports and games that we know today - in particular bowling!

One further thought: The Scots while perfecting their game of golf benefitted from their government using miniature guillotines. These devices were used as a form of punishment for male adulterers. The severed objects were for a while used as pink balls to driven by makeshift clubs known as ballbusters. In time the golfers would use the term to refer to their wives who objected to their love of the game of golf.

Are you making some of this up? Sounds like it to me. Bwahahahahaha.

Have a terrific evening. :)

Interesting ... in a morbid sense.

You bet I was making MOST of that up.

At least it got a laugh out of you!

So THAT'S why I would sometimes lose my head over chopping off a 6 from a 10 pin on a missed spare, eh?

You do know how to work a pun. Keep it up. You are making headway. snerx.

I forgot to mention that the term 'bowling' is a derivation of the name of one of the guillotine's most famous "head droppers:" Anne Boleyn.

You didn't agree with the origins of golf?

Your funny picture inspired me.

Here is the link: