Ted, We Knew You Too Well

Friends, bloggers and readers, lend me your ears eyes; I come to bury Kennedy, not to praise him. 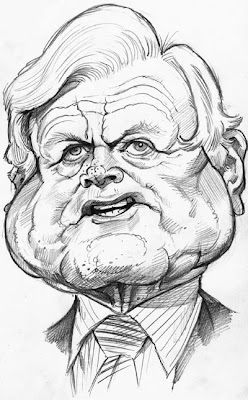 I'm no native son of New England, or of its hub, Boston, but I've spent two-thirds of my life calling it home. In those forty-odd years I've viewed the region with my own, if not unique, perspective.

I chose to open this prosaic essay by taking literary license in satirizing and borrowing from Shakespearean literature. The line, of course, is from the well known soliloquy of Marc Antony, his eulogy for the slain Julius Caesar.

Senator Edward M. Kennedy (1932-2009) was not an emperor, but he was the surviving patriarchal monarch of New England's pseudo-royalty. He was not slain by assassins, as were his two brothers before him, but he fell to a no less nefarious killer.

From where I sit, I'm compelled to speculate that in no other city or region are politics and political ambitions held with such esteem that they eclipse family, friends, religion and woefully so, even honor. I don't know to whom the adage "there is no honor among thieves" can be correctly attributed, but I think the author was misquoted and must have been referring to politicians.

The evil that men do lives after them; the good is oft interred with their bones ...

Had I been born in New England, or if I shared a Yankee sentimentality, I would probably take exception to the above, the next line of Marc Antony's speech being used here. I was not and I do not! Inasmuch, I will take the liberty to amend it to reflect my own sentiments:

The good that Teddy did lives after him; the evil will be interred with his bones.

If you have perceived my amendment above as praise, then you have missed my point altogether. It's like this, in New England a beloved politician, especially a Kennedy can do no wrong. What you might call a wrong or even a sin, from Boston to Cape Cod it will be sugar-coated as an unfortunate and forgivable mistake.

It will be with no stretch of the imagination for me to say that if you or I, or any other less wealthy or less privileged individual for that matter, had driven that car off the bridge at Chappaquiddick, we would have ended up behind bars. If we weren't sill there, we would've surely been incarcerated for a very long time. If not convicted of vehicular homicide, we would have been in the very least sentenced for manslaughter.

He was indicted, but not convicted. In spite of not trying to free a trapped passenger, in spite of leaving the scene of the accident and in spite of not reporting the accident, he was nonetheless reelected to his Senate seat by the people of Massachusetts. His evil, Chappaquiddick, will be interred with his bones.

My four decades in New England have not given me any insight into understanding the blind devotion showered upon its politicians. Most perplexing is the love affair with the Kennedy royalty.

I'll leave this topic with one final thought. Had America's most famous and beloved humorist, Will Rogers, been born and raised in New England, the following may well have been one of his most quoted lines:

I never met a man I didn't step on.

The Lion of the Senate has ceased his mighty roar!

You and I are on the same page here. Very well said.

for all the evil that he did,he als did good as well.Should he have gone to jail over the death of Mary Jo Kopechne.Yes,but he was never convicted.

I agree that Senator Kennedy has done some good.

While it's true he wasn't convicted - remember this - he was tried in Massachusetts. That was the point of my post.

I'm sure there are many like you outside of Massachusetts. He was not the great champion of the people as some would lead us to believe.

You and Sandee are both right. 'Nuff said. Book's closed on this individual.

Another non-New Englander who is not blinded to reality.