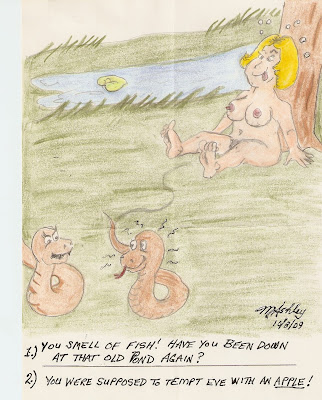 There were three nuns who died and went to purgatory(between heaven and hell). Then ST. Peter went up to them and said, "Before any of you can enter heaven you must answer one question".

So ST. Peter went to the first nun and asked, "How long did it take for God to create the world?"

So there were bells ringing and fireworks, and ST. Peter said, "You may now enter heaven".

Then ST. Peter ask the second nun, "Who were the first man and woman"?

So there were bells ringing and fireworks, and ST. Peter said, "You may now enter heaven".

Then he asked the third nun, "What was the first thing that Eve said to Adam?"

Then there were bells ringing and fireworks. 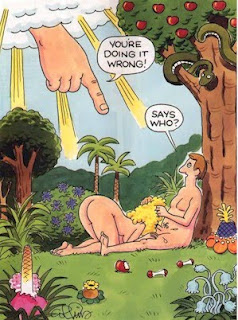 "You're fooling around with other women," she charged.

"You're being unreasonable," Adam responded, "You're the only woman on earth."

A shot time later he was awakened by someone poking him in the chest. It was Eve.

"What do you think you're doing?" Adam demanded. 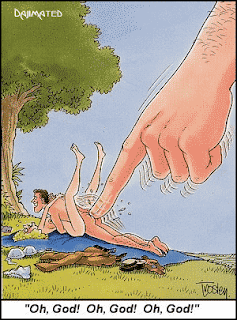 10. Adam would frequently become lost in the garden because he would not ask for directions.

9. One day Adam would require someone to locate and hand him the remote.

8. Adam would never go out and buy himself a new fig leaf when his wore out and would therefore need Eve to buy one for him.

7. Adam would never be able to make a doctor's, dentist's or haircut appointment by himself.

6. Adam would never remember which night to put the garbage on the curb.

5. If the world was to be populated, men would never be able to handle the pain and discomfort of childbearing.

4. As the Keeper of the Garden, Adam would never remember where he left his tools.

3. Adam needed someone to blame his troubles on when God caught him hiding in the garden.

1. When God finished the creation of Adam, He stepped back, scratched his head, and said, "I can do better than that."

Adam invented the soft drink when he made Eve's Cherry Pop.

In The Beginning
The account of man's creation in the book of Genesis is so familiar and so entrenched in our cultural heritage that many accept as actual historic fact the assertion that Woman was created from one of Adam's ribs.

Science has railed against such simple beliefs for centuries; last week, at a dig in the escarpments along the western shore of the Dead Sea, archeologists have uncovered ancient, original texts that pre-date these writings by 1,300 years. Translated, their account of life's beginnings on earth are much more scientifically plausible... 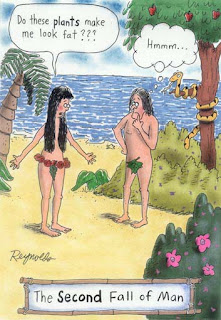 "... and God created Woman, giving her three breasts to succor her young".

And God spoke, saying to her, "I have created thee as I see fit, but mine is no longer the only opinion in the universe (sigh). Is there anything about thee that thou would prefer differently? "

And Woman spoke, saying, "Lord, I am not made to birth whole litters; I do not need but two breasts."

And God said, "Thou speak wisely, as I have created thee with wisdom." There was a crack and a lingering odor of ozone, and it was done, and Woman stood holding her third breast in her hand.

"Now just what am I going to do with this useless boob?" Woman exclaimed.

And so it was, God created Man. 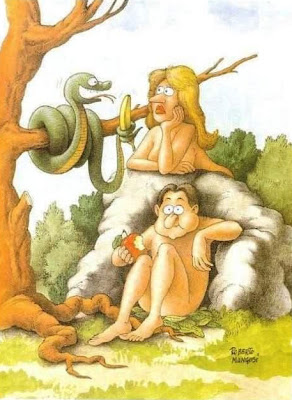 The story of Adam and Eve was being carefully explained in the children's Sunday School class. Following the story, the children were asked to draw some picture that would illustrate the story.

Little Bobby was most interested and drew a picture of a car with three people in it. In the front seat, behind the wheel was a man and in the back seat, a man and a woman.

The teacher was at a loss to understand how this illustrated the lesson of Adam and Eve.

But little Bobby was prompt with his explanation. "Why, this is God driving Adam and Eve out of the garden!" 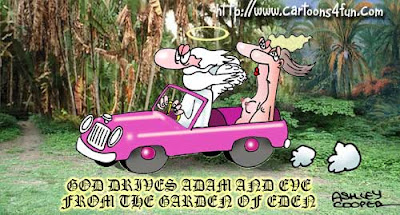 I love the cartoons, too.

I have to admit that the first cartoon, the crudely drawn one, was drawn by me - about twenty years ago.

I added the "Pick a Caption" header for this post as well as the second quotation.