For Whom the Nobel Tolls

...It Tolls For He?
Sometimes one must scratch his or her head when an award is given. We ask ourselves what criteria came into play for that decision? A more beguiling question: Why was the winner even nominated in the first place? 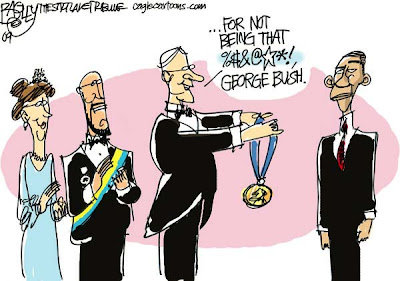 Since when does a check mark on the box labeled "Mediocrity" rate Nobel consideration? Does failure to live up to campaign promises merit a positive vote? Did reneging on those promises push him over the top?

Ah, but if comparisons to a predecessor counted, then I'd say that the fix was in place! This Editorial cartoonist hit the nail on the head! 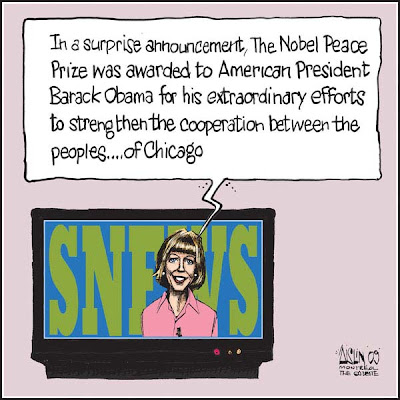 Perhaps his attempts to blindside the Olympic Committee to appease his home town of Chicago and Oprah impressed the Nobel Prize panel. Any action that would prevent Oprah from whining would have to be considered a peaceful one. Who knows, the Chicagoans just might vote for him in his run for reelection in 2012!

Kudos to this cartoonist for being spot on! 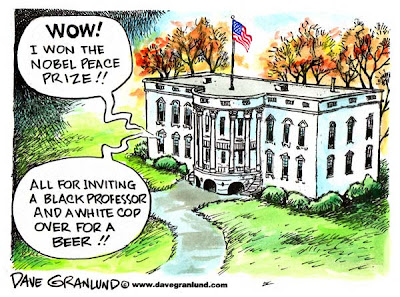 Sharing a beer with an arrogant black professor and a white cop was surely an act of peaceful racial relations. Despite the fact that it was a civil disorder and our President had no business sticking his nose in the affair, the Nobel Prize panel viewed a "happy hour" on the White House lawn as an exemplary message of peace to the world. 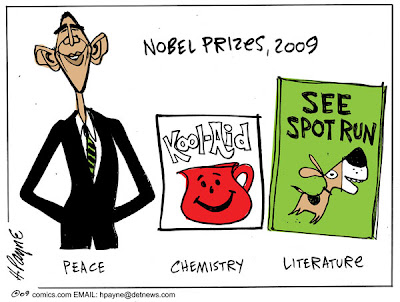 The next cartoonist took a different approach by comparing the significance of President Obama's award to Nobel Prize winners in other fields.

Given this perspective, it is most gratifying to see that he is in the company of greatness! 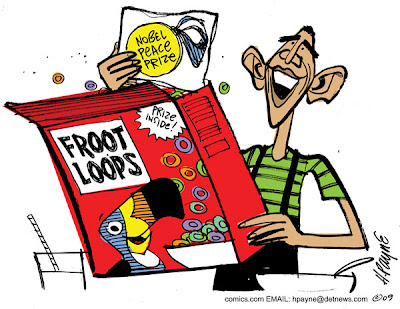 The cartoonist of the previous cartoon also reveals just what value this year's Nobel Prize for Peace might have.

Obama said that the one million dollar cash prize will be donated to charity. Will it be to one based out of Chicago? Perhaps it will be earmarked for a charitable organization to fund a bid for another Summer Olympic Games.

In conclusion, it would be fitting if he was to return the Prize to the "Fruit Loops" who awarded it to him in the first place.

The credibility of the Nobel as a "peace prize" went phfffffft when it was awarded to Yassir Arafat.

Now, it's worth a toy in the Cracker Jacks box, in so far as it can be awarded now for words instead of deeds.

You're so right about Arafat's prize!

Remember - he was only in office for about two weeks when the the nominations were closed.

Duh? He did something award-worthy in his first two weeks? (Never mind since.)

This is a total embarrassment if you ask me. What a shame.

It must be a slow week for news.
What does it matter who gets the Nobel Prize and for what reason?
Every one is very anxious to condemn or criticize. May be because it is the only refuge for the reactionaries!
It might be better if you really researched the discussions and debates of the Nobel Committee. Failing which, spend time contemplating your future.

(A very common, if not influential name, by the way.)

I welcome your comments, even if they are condescending.

"What does it matter who gets the Nobel Prize and for what reason?"

It does matter when the award is a joke!

If he'd been given the award for literature (for his book), that would have been one thing - but this was an award for peace!

For the only evidence of reactionaries, we need look no farther that the committee who nominated a man who had only been President for two weeks when the nomination process was closed.

As for contemplating my future ...

As I near retirement, I am doing just that. If his future includes a viable plan for health care and security for us aging Americans, I can grow older with PEACE of mind.
Then I'll not only endorse his nominations for awards, I'll nominate him myself!

My friend, his accomplishments, whether worthy of awards or not, affect the future you must contemplate. I trust that matters to you.

By the way, as stated in my blog's description, this is a humor and satire site. My stand on issues such as this are not necessarily what you may read here.

I'm in for the laughs!

Y'all come back. Ya hear?

This is apparent in my response to "anonymous" above.