This Cup's For You

Guys, Imagine This Scenario:
She finally agrees to go out with you. You pick her up at her house. You meet her parents. You agree to have her home by eleven. You take her to the double feature at the drive-in.*

*For those younger than the baby boomer generation, some explanation might be in order.

Yes, guys used to ask the girls for a date. Yes, guys picked the girls up at their houses. Yes, guys actually had to meet the girls' parents. Alas, it's true, the girls had curfews. Drive-ins were outdoor movie theaters where you actually [sic] watched the movies in your car! That's right, you actually could see two movies for the price of one admission. (They also gave you a cartoon, a news reel, and sometimes a serialized cliffhanger feature.)

Okay, the stage is set to continue with the intended scenario.

She moves close to you. You fake a cough which gives you the opportunity to slip your arm around her shoulder. She moves closer. (You're careful to avoid her hair which is stiff from hairspray, lest you scratch your eye.) If you're lucky, she doesn't push your hand away from her breast when you finally work up the nerve to inch your hand down from her shoulder to cop a feel. (If she does push your hand away, you have to apologize and claim it was an accident.)

She cuddles closer. It's time to try for that kiss. If you're lucky, she knows about French kissing. She probably practiced this with a close girl friend. (No, they are not lesbians, and the thought never crosses your mind. They were still in the closet back then and besides, most of us didn't know what the word meant.)

Where were we? Ah yes, that kiss. Oh boy. She does know about French kissing, but you don't. What the heck, you just follow the leader. Unfortunately, you forgot about your chewing gum and it ends up in her mouth! Whew, she's a good sport and laughs it off. Say, this kissing thing is neat. You want to do it some more. Wow. She likes it too!

At his point in time you've both forgotten about the Drive-in Movie Credo. Simply put, the credo dictates that you memorize the name of the movies and who starred in them. (Chances are you're both going to be grilled by her parents when you take her home, especially if you are five minutes or more late for the curfew deadline.)

The kisses are more frequent and longer. You are beginning to wonder if you should try for second base. You decide to go for it. You suggest that it would be more comfortable if the two of you moved into the back seat.*

*Another note for you pre-baby boomers:
The cars were larger than today. They had large roomy back seats. You could actually lie down in them!

She agrees! The two of you move to the back seat and pick up where you left off. It isn't long before it's getting hot and heavy. You've managed to get your hands beneath that tight sweater. You slowly move your hand up her abdomen. You're actually touching her bra! You try to slip your finger beneath the bottom of it, but it's too tight. Hot damn! She guides your hand onto her breast! (Your buddies aren't going to believe you!)*

*Getting "lucky" back in the 50s and early 60s was rare for most of us guys, although a lot of guys claimed they did do it anyway.

Your fingers reach and touch her cleavage. You're now at an impasse because it's an impossible angle with your arm beneath the tight sweater for you try to reach down and inside the bra.

Then you remember from the pictures in the Montgomery Ward and Sears & Roebuck catalogs that bras have clasps on the back. You slowly slide your hands around her ribcage and onto her back. You inch your hands up and finally reach the back strap. You begin to fiddle with clasp. You can't get it undone. You then realize that there are four of them!

NEWS FLASH!
Guys (you non-baby boomers too) it just might become acceptable to ask a woman to remove her bra, and she will do it willingly, anytime and anyplace - in private or in public. It's true! In fact, she probably will do so without you even asking! Get this, the woman can even be a total stranger! 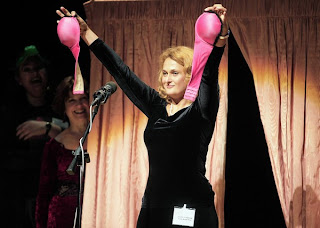 "The hell you say," you guys are probably thinking. "The hell I will," you gals are saying.

Guys and Gals, Imagine This Scenario:
The request, maybe even a direct order, would be acceptable in the event of heavy smoke from a raging fire, a dust storm, a terrorist attack with biological or gas weapons, or perhaps a swine flu outbreak.

This will all be possible thanks to Dr. Elena Bodnar (see image), who was the winner of this year's Ig Nobel Prize. The Ig Nobel Prize is given by "Annals of Improbable Research" magazine for achievements that 'first make people laugh and then make them think.'

Her invention? The bra-mask -- a brassiere that in an emergency can be turned into a pair of protective face masks.

To use the bra-mask, the wearer unsnaps the brassiere from under her shirt, which breaks it in two. Because each cup has hooks on its side, the strap is wrapped around the head and hooked to the cup, which goes over the mouth. Bodnar said an experienced user can don the mask in mere seconds.

Bodnar is now pursuing commercialization of her bra-mask. She hopes all women will eventually have one. 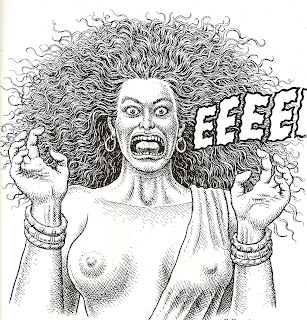 But what about the men?

As Bodnar noted in her Oct.1 acceptance speech at Harvard University, "Isn't it wonderful that women have two breasts, not just one? We can save not only our own lives, but also a man of our choice next to us."

So gals if I were to come up to you and ask ( or order ) you to remove your bra, don't scream and call me a pervert or a pig. Just take it off and don't ask questions!

Remember, I'll be trying to save both of our lives!

(Of course, there will have to be some drills or practice runs from time to time.)

The script below the "NEWS FLASH" header contains excepts from a story by Erika Slife and appeared in the Chicago Tribune.

" although a lot of guys claimed they did do it anyway."

A gentleman never reveals his exploits with the fair sex. snerx.

This give a whole new meaning to the phrase, "a cup of kindness". Will it have to be changed to "a cup of kinkiness"? That was almost how I phrased it upon first effort. snerx

G'day mate, Jackk told me not to miss this post and I'm glad he prompted me as I sometimes don't get here lately, a good story.

More claimed they did than those who actually did.

_The birth of reputations.

...Or her cups runneth over?

I'm guilty of not getting to your site as often too.

I'm glad you enjoyed it.