A man walks into a bar. He sees a good looking, smartly dressed woman perched on a bar stool.

He walks up behind her and says: "Hi there good looking, how's it going?"

She turns around, faces him, looks him straight in the eye and says: "Listen, I'll screw anybody, anytime, anywhere, your place, my place, it doesn't matter. I've been doing it ever since I got out of college. I just flat out love it."

Ray, an old retired sailor, puts on his old uniform and heads for the docks once more, for old times sake.

He engages a prostitute and takes her up to a room.

He's soon going at it as well as he can for a guy his age, but needing some reassurance, he asks, "How am I doing??"

A guy walks into a bar and sees a dog lying in the corner licking his balls.

He turns to the bartender and says, "Boy, I wish I could do that." 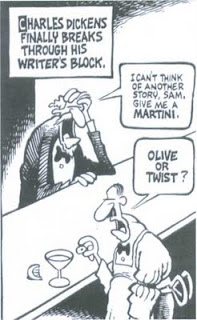 The Pope was finishing his sermon. He ended it with the Latin phrase, "'Tuti homini' - Blessed be mankind."

A women's rights group approached the pope the next day. They noticed that the pope had blessed all of mankind, but not womankind.

So the next day, after his sermon, the pope concluded by saying, "'Tuti homini, et tuti femini' - Blessed be mankind and womankind."

The next day, a gay-rights group approached the pope. They said that they noticed that he had blessed mankind and womankind, and asked if he could also bless those who are gay.

(The first three cartoons above were "borrowed" from the site of Jason Love ; the following is snippet from his stand-up comedy routine. )

PETA, the animal rights people, recently asked Ben and Jerry's to replace the cow's milk with human breast milk. Gross, I know ... You should see what they're doing with Cherry Garcia.

Human breast milk ... I guess it makes sense for Pamela Anderson to be their spokesperson. She's leading the way! PETA almost didn't work with Pamela because earlier in her career -- and I don't know if you know this -- she was responsible for the choking of a lot of chickens.

I'd steal the tuti fruiti one, but would take a beating if I posted it. All the politically correct stuff you know.

Have a terrific day and thanks for the laughs. :)

LOL - I really liked that one too.

Thank you. Glad you enjoyed them.

Ah, yes, the old PC thing. I wish that crusade would fade into oblivion.

I'd appreciate if you can give me some feedback on our site: http://www.regencyshop.com/Bar-Stools/c33/index.html?osCsid=c57d1fcff64e9730d85dc1e8b59a7c5f

I realize that you are home decor-modern design connoisseur :) I'd like to hear your opinion/feedback on our products. Also, it'd be swell if you can place our suede wassily chair in a bag set in a bag on your blog.

LOL
This is very funny,had a good laugh.