We All Scream For Halloween 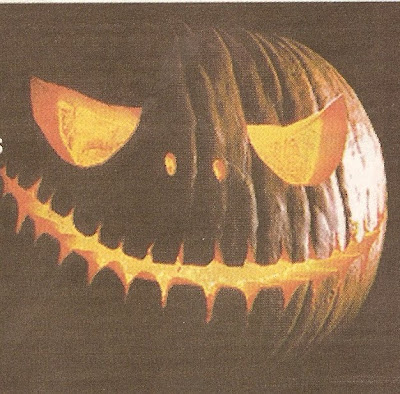 You might be a redneck if the jack-o-lantern on your front porch has more teeth than your spouse.

Funny Farm Masquerade
There was a costume party at a mental hospital; the theme of the party was "war".

The first person comes up onto the stage and says, "I'm an atomic bomb." He gets his applause and steps down.

The second person comes up and says, "I'm a hydrogen bomb." Again, there's applause and he steps down.

And then a naked little man comes up to the stage and says, "I'm dynamite."

Everybody runs away hysterically. When one of them is asked why, he says, "Didn't you see how short his fuse was?"

Werewolf PMS
The Wolf Man comes home one day from a long day at the office.

"Listen! I don't want to talk about work!" he shouts.

"Okay. Would you like to sit down and eat a nice home cooked meal?" she asks nicely.

"Listen!" he shouts again. "I'm not hungry! I don't wanna eat! Alright! Is that alright with you? Can I come home from work and just do my own thing without you forcing food down my throat? Huh?"

At this moment, the wolf man started growling, and throwing things around the apartment in a mad rage.

Looking out the window, his wife sees a full moon and says to herself, "Well, I guess it's that time of the month." 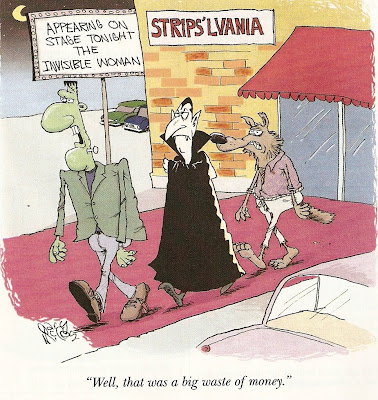 3 Vampires in a Bar
It was Halloween and three vampires went into a saloon and bellied up to the bar.

"What will you have?" the bartender asked.

"I’ll have a glass of blood," the first replied.

"I’ll have a glass of blood, too, please," said the second.

"I’ll have a glass of plasma," said the third.

"OK, let me get this straight," the bartender said. "That’ll be two bloods and a blood light?"

Fill 'ER Up
A guy goes to a costume shop and says, "I'm going to a costume party as Adam and I need a fig leaf."

The girl brings out a fig leaf. He says, "Not big enough."

She brings out a bigger one. He says, "Still not big enough."

She brings out a huge fig leaf. He says, "Still not big enough."

She says, "Listen, Ace, why don't you just throw it over your shoulder and go as a gasoline pump?" 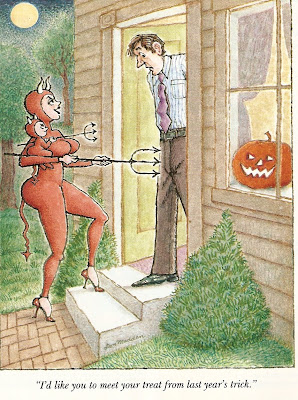 Costume Dilemma
On the night of a Halloween costume party a couple were having trouble picking suitable outfits.

After a while the wife got mad and stormed out of the room.

Fifteen minutes later she came back completely naked except for a lemon between her legs.

The husband looked at her for a moment and then stormed out of the room himself.

A few minutes passed and then he returned with a potato around his penis.

The wife gave him a quizzical look and the husband said, "If you're going as a sour-puss, I'm going as a dictator."

They Had Him Pegged
There's this man with a bald head and a wooden leg who gets invited to a fancy Halloween dress party. He doesn't know what costume to wear to hide his head and his leg so he writes to a fancy dress company to explain the problem.

A few days later he receives a parcel with a note. "Dear Sir, please find enclosed a pirates outfit. The spotted handkerchief will cover your bald head and with your wooden leg you will be just right as a pirate."

The man thinks this is terrible because they have just emphasized his wooden leg and so he writes a really rude letter of complaint.

A week passes and he receives another parcel and a note which says, "Dear Sir, sorry about before, please find enclosed a monks habit. The long robe will cover your wooden leg and with your bald head, you will really look the part."

Now the man is really annoyed since they have gone from emphasizing his wooden leg to emphasizing his bald head and he writes the company a REALLY rude letter of complaint.

The next day he receives a small parcel and a note which reads, "Dear Sir, please find enclosed a jar of caramel. Pour the jar of caramel over your bald head, stick your wooden leg up your ass and go as a candied apple!"

Sour-puss? Dictator? Bwahahahahaha. There are some good ones, but the sour-puss/dictator one made me spew my water all over my monitor.

LOL! Thanks for the laughs. I knew Halloween was fun.:)

That's the one I thought you'd like the best.

Halloween is always good for some laughs.