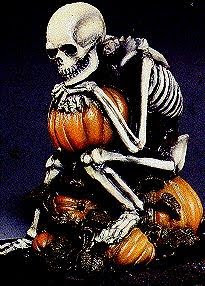 COMPLAINTS OF MODERN DAY VAMPIRES
* Grunge look makes it tough to tell living from the undead.

* Hard to get a decent puncture with latex on your fangs.

* Can't enjoy a meal at Burger King without some redneck yelling, "Look Ma! It's Elvis!"

* After 45 years of Communist rule, it's impossible to find clean, uncontaminated Transylvanian soil for bottom of coffin.

* After 100 years of trying, still can't score with Elvira.

* No bat is safe with Ozzy Ozbourne around.

* With all those crucifix-wearing Madonna clones, junior highs are suddenly off-limits.

* No warm blood for miles around DC.

* Exhausted from all those Calvin Klein photo shoots.

* Buxom wenches of old have been replaced by aerobicized "hardbodies."

* Sick and tired of being mistaken for Keith Richards. 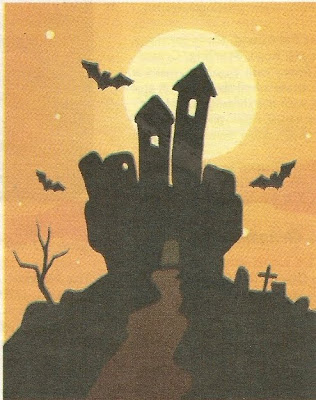 Most Tasteless Costume
A man shows up at a Halloween party.

He is naked, except for a pair of in-line skates on his feet.

When the host opens the door and sees him standing there, He says, "What are you supposed to be?"

The would be-guest answers, "I came as a pull toy!"

- The Bride of Frankenstein had big, pointy hair and a small, round ass not the other way around.

- 'Cause you should know that wearing a white sheet in Atlanta could only lead to getting your ass whupped, Homeboy.

- Your "Yanni" costume got you beat up on the way to the party, four times.

- Your Dirk Diggler costume is merely embarrassing now that your "Diggler" is stuck in the car door.

- Your beret falls off every time you kneel.

- No one can tell whether you came as Abe Vigoda or Marge Schott.

- Much to your surprise, three other people came dressed as Nikola Tesla, father of alternating current.

- The judges wrongly interpreted your "Liposuction By-product" costume as a "Bowl of Tapioca Pudding" costume.

- The only song you knew to go with the costume was "Mammy," and the judges at the NAACP party were not impressed.

- *Nobody* likes a farting clown. 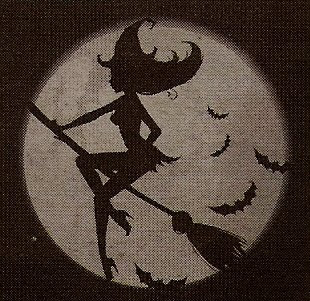 Casper Takes a Beating
An extremely modest man was in the hospital for a series of tests, the last of which had left his bodily systems extremely upset.

Upon making several false alarm trips to the bathroom, he decided the latest episode was another and stayed put.

He suddenly filled his bed with diarrhea and was embarrassed beyond his ability to remain rational.

In a complete loss of composure he jumped out of bed, gathered up the bed sheets, and threw them out the hospital window.

A drunk was walking by the hospital when the sheets landed on him.

He started yelling, cursing, and swinging his arms violently trying to get the unknown things off, and ended up with the soiled sheets in a tangled pile at his feet.

As the drunk stood there, unsteady on his feet, staring down at the sheets, a hospital security guard, (barely containing his laughter), and who had watched the whole incident, walked up and asked, "What the heck is going on here?"

The drunk, still staring down replied: "I think I just beat the sh*t out of a ghost." 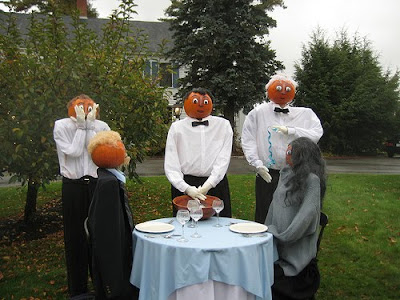 An English Vampire?
It's Halloween and everyone's out trick-or-treating. A bartender is working the late-night shift at the bar. He looks outside and sees everyone in crazy costumes. He sighs and picks up a glass and starts cleaning it.

At around midnight, a guy in a vampire costume walks in and sits at the bar. He says to the bartender "Hi. I'm a vampire and I'd like a cup of human blood please."

The bartender looks at him skeptically. "No you're not. You're just wearing a costume."

"Alright," the bartender says. He goes in the back and comes out with a cup of blood. He gives it to the vampire who drinks it right away.

"Thanks," he says, and leaves.

An hour later another vampire comes in and sits at the bar. He says "Hi, I'm a vampire and I'd like a cup of human blood please."

"Okay," the bartender says and goes in the back again. He comes out with another cup of blood. He gives it to the vampire who drinks it and leaves with a 'thanks'.

"I know, I know," the bartender interrupts. "You're a vampire and you want a cup of blood right?"

"Um, no," the vampire answers. "I AM a vampire, but I'd just like a glass of hot water please."

"Sure" the bartender says. He pours him a glass of hot water. As he gives it to the vampire he says "You know, there were two vampires that came in before you that wanted blood. How come you're just asking for water?"

Without answering the vampire reaches into his pocket and pulls out a used band-aid.

I came as a pull toy. Bwahahahahaha. I'm guessing he just may have the best time of everyone. Well, if he can. Well, you know.

Yeah, he should have a good time - especially if someone pulls his chain.

Those are three good choices.

It's been said that every bettor needs to look at this,

Watch this now or quit betting on sports...