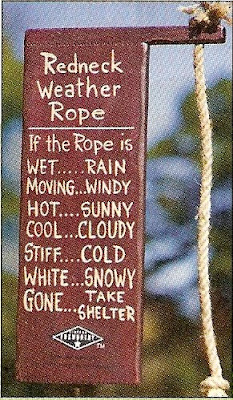 Howdee do, folks. Cletis Clyde here. I jest installed my brand-spankin' new weather predictin' thing-a-mabob out yonder in the back yard. The feller down at the hardware store tol' me it was state-of-the-art, but he wuzn't sure which state the art wuz done in.

Ya know, I'm a-thinkin' he might a hornswoggled me outta $4.95, plus tax. The way I sees it, that danged thing ain't gonna be predictin' no weather until after what weather they's a gonna be happens.

I'm a-fixin' to march right back down there and demand a refund. They's better things to spend my hard-earned unemployed money on. Hell, I can buys me some Carlings or Pabsts, d'pends on which one is on sale, and get drunk. Then I won't be payin' no never mind to what the weather is. Yup, that's what I'm a-gonna do. I'll show that feller that he's gonna hafta get up awful late in the afternoon to pull a fast one over my eyeballs!

Tarnation! Would ya lookie yonder. The sun's done settin' and it ain't even four thirty yet! Have I ever tol' y'all jest how much I hate it when they decide to turn the clocks back fer daylight stealin' time? It ain't fair, 'specially to us ordinary folks. When I roll outta bed 'round two o'clock they's only about two or three hours of daylight left. Damned iffin' the whole day ain't been wasted!

Can y'all believe it? Next week is Thanksgivin' Day. It sure 'nuff snuck up on me this here year. I wuz a sittin' on the porch swing the udder day a thinkin' 'bout Thanksgivin' and how it come to be a holiday in the firs' place. I come to the 'clusion that the story what's in the histry books jest cain't be true.

Think 'bout it. These Pilgims, they's all dressed up in their Sunday-best clothes and they get off a boat at Plymouth Rock? Right off, that part oughta have ya scratchin' yer noggins. They didn't have cars back then, so how in the hell wuz they gonna name that rock after one?

Still ain't convinced that story ain't nothin' but a crock what wuz made up so's state and fed'ral workers can get a-nudder day off wiff pay? Are you really inclined to believe that those Injuns a-wearin' nuffin' but moccasins and loin cloths jest up and walked right outta the woods and greeted these Quackers who was a-wearin' hats and shoes with buckles on them?

Hell no! Them natives woulda been a-hidin' in the bushes and a-whisperin' amongst their friends, "Aw, shit! There goes the neighborhood!" What finally brung them out in the open, y'all ask? They jest kept a-watching them until they wuz good and ready to make contack. Ya see, they wuz a watchin' them Pilgrim gals a-takin' baths down by the river. Jest like men today, them braves weren't very long a-fore they's starting to get cardinal ideas - iffin ya gets my drift. 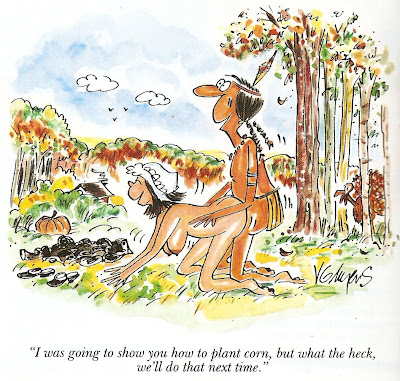 It's prolly true what them histry books say 'bout them Injuns bein' right neighborly and teachin' this country's firs' boat people how to plant corn and stuff. Them Injuns knew all about reapin' and sowin' and plantin' seeds, coz they lived off the land. They weren't as s'fistocated as that tribe what lived out in Ohio what called themselves the Cleveland Indians.

But don't be so indignorant to think that them Injuns wuzn't doin' a lot of their own reapin' and sowin' and plantin' of their own seeds. Now whilst Miles Standish and John Alden was a-fightin' over Priscilla Mullens, they wuzn't payin' much 'tention jest what she wuz up to. Well, I 'spect she wuz busy learnin' from one of them braves all about plantin' and such. A-fore one them Pilgrim fellers had the chance, I'm purty sure that Injun was a'ready making sure her garden wuz fertilized.

Well, Alden ended up winnin' Priscilla fer his wife when he gave her one of them makeup things wiff a mirror and stuff to put on her face. Yup, you done guessed right. It was the Mayflower Compact. They sure did a lot of reapin' and sowin' and plantin' too, cause they had ten younguns. Accordin' to histry, that woman was born in Surrey County in the south of England. Y'all ain't gonna believe the name of the town she wuz born in. I ain't lying, the town wuz named Dorking! I figgers that wuz why she wuz so good at reapin' and sowin' and plantin'.

They's anudder thing I think is phony 'bout that first Thanksgivin'. Where in the hell did they come up with all them vittles they had? Yeah, they wuz wild turkeys in the woods and they did manage to plant some corn, but what 'bout the rest of that spread? Mash taters, cranberry sauce and apple pies? Come on folks, smarten up! There wuzn't anywhere near where theys coulda went shoppin' at a Winn-Dixie or a Krogers or even a Piggly Wiggly. They wuzn't even a convenience store in them parts.

I guess it don't matter nohow what's true and what's not true about Thanksgivin' Day. All I knows is that I'm gonna eat till I gotta loosen my belt and watch me some football games. Who knows, after she's done cleanin' up, and iffin' I'm lucky, maybe the ol' lady'll let me do some plantin' of my own!

Well, a-fore I run off to the hardware store to get my money back fer that weather thingy, they's somethin' I wanna tell you 'bout. It's 'bout what happened to me the udder day down at the fillin' station when I wuz a-gettin' gas fer my weed-eater.

I wuz a mindin' my own bizness when this purty gal pulled up in a fancy red car. Well, she commenced to open the hood and then wuz a-lookin' inside at the enjun like she wuz a-tryin' to see why her motor wuzn't runnin' proper like. She wuz a-wearin' cut-off shorts so tight they must-a been spray-painted on her! Lookin' at that sure enuff got my motor a-runnin', iffin ya get my drift.

Well I had jest worked up enuff gumption to mosey on over there to see iffin I could do somethin' 'bout both our motors. A-fore I got there, this guy pulled up in a truck and asked me fer d'rections to the Interstate.

I spied his plate and seen that he wuz from Tennessee. So I asked him where he wuz a-headin'. He tol' me he was goin' to Pennsylvania for some homemade apple pie. I said to him that that would make fer some good words to put in a song. He said that someone had a'ready done a song like that. Tarnation, I thought. Jest like that someone up and stole my idea.

When he pulled off in his truck I remembered that gal wiff them tight shorts on. Danged if I didn't turn around and she wuzn't a-drivin' off too. Well, I guess they wuz a lesson to be learned there. You fellas out there, I'm gonna leave you wiff some sound advice.

When you see tight shorts on a purty butt, pay no 'tention to the ass what asks fer d'rections.

Well, I hope y'all have a happy Thanksgiving. So r'member, pay more 'tention to the turkeys what's served to you and less 'tention to what udder turkeys be sittin' 'round the table.

Focus, you have to focus on what's really important. Bwahahahahaha.

Yep, more than one "turkey" can be a bit much.