The Holy Babble - the Kids' Edition

A few summers ago I picked up a few books at a yard sale for the bargain price of 25 cents apiece. I dusted off the jacket of one of them this evening. It was a book by the actor-comedian, Dick Van Dyke. The 1970 Doubleday publication is titled Faith, Hope and Hilarity - The Child's View of Religion.

The book is a collection of anecdotes of children and their perspective on religion and the teachings of the Good Book. I skipped through the book and selected a few passages to post here. I paraphrased them so that I would remain at least on the outer fringes of plagiarism. 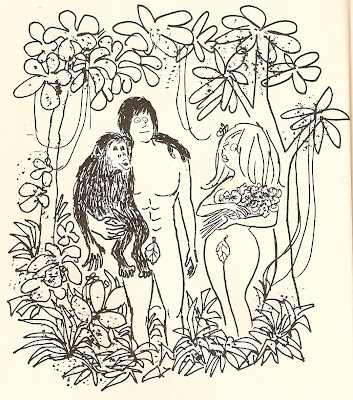 ° ° ° ° ° ° ° °
On his first day at Bible School one little boy opened his lesson book on the Creation. Seeing the image at the left he called out, "Hey, guys! This is going to be good. Here's Tarzan and Jane!"

° ° ° ° ° ° ° °
A little girl visiting her grandmother happened to be thumbing through a large and old family Bible. She found a dried pressed leaf which crumbled at her touch. "Look, grandma! Do you think this old leaf belonged to Eve?"

° ° ° ° ° ° ° °
According to the Book of Genesis, after God had fashioned the heavens and the earth, He created man in His own image and put him in the Garden of Eden. Realizing that Adam needed a mate, He took a rib from his side while he slept and made from it a woman named Eve.

When he heard the story in Sunday School, it made a strong impression on one imaginative little boy. Later that day, the boy was running too hard and felt a pain in his side. 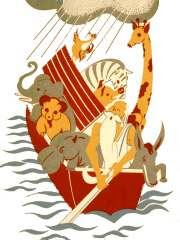 The story of Noah's Ark is one that is sure to evoke some interesting reactions in young children. This was obvious in an exchange from two boys after hearing the story at Sunday School.

Said one, "Do you suppose Noah did a lot of fishing on his Ark?"

His friend replied, "How could he, with only two worms?"

° ° ° ° ° ° ° °
A teacher asked her class to make a drawing that illustrated their favorite Bible story. One boy drew an animal and colored it green, red and purple.

"What is it?" his teacher asked him.

"It's Joseph's goat of many colors."

° ° ° ° ° ° ° °
A family was on the way home after a Christmas pageant. Wondering how the children remembered of the play, the father asked, "Who was that baby in the manger?"

"Oh, Daddy," said the girl with expressed impatience, "Didn't you ever listen to us sing, 'A Wayne In A Manger'?"

Before the teacher could think of an answer, another little girl piped up, "Only His hairdresser knows!"

Kid's perception is amazing isn't it. It truly is.

It's a shame they have to grow up to become adults.