Dyslexic Man Walks Into A Bra ... 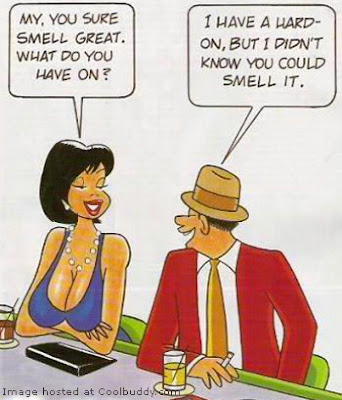 Smells Good
Every day a male co-worker walked up very close to a lady standing at the coffee machine, took a big breath of air and told her that her hair smelled nice.

After a week of it, she couldn’t stand it anymore and complained to a supervisor in the personnel department stating her wish to write a sexual harassment grievance against him.

The Human Resources supervisor, puzzled by her decision, asked, “What’s sexually threatening about a co-worker telling you your hair smells nice?”

Holiness
A lady dies and goes to heaven. She arrives at the pearly gates and is greeted by St. Peter. There were a few people waiting before her, so she strikes up a conversation with the cock-bearing saint. They were deep in discussion when suddenly she hears a blood-curdling scream.

“What was that?” she asked.

“Oh, don’t worry about that,” said St. Peter. “It’s just someone getting a hole drilled in their head so they can be fitted for their halo.”

A few seconds later, she hears another agonized scream, more terrible than the previous one.

“What was that?” she asked again.

“Oh, don’t worry,” again said St. Peter soothingly. “It’s just someone getting holes drilled in their back so they can be fitted for their wings.”

Upon hearing this, the lady starts to back away.

“Where are you going?” inquired St. Peter.

“But you can’t go there. You’ll be raped and sodomized!”

Jill's Legs
So this new bar opens and the owner can't think of a name. So he decides to name the bar after the 3rd person who walks in. It takes doesn't take long and soon the 3rd customer walks in.

The owner jumps up and walks over to the girl and says, "You're the 3rd person to enter my bar and I'm going to name it after you."

The owner looks her over and says, "I like your legs too, so I'm going to name the bar 'Jill's Legs'"

The next day a bum is sitting outside the bar and a cop asks him what he's doing.

He answers, "Waiting for Jill's Legs to open so I can get a drink!"

For the Love of a Woman
This man walks in a bar and says to the bartender, "Hey Joe, how about fixing me up with 8 shots of whiskey and 8 bottles of beer?"

The Man says, "Well, my son has just come home from college and I found out he's gay."

Joe says, "Man that's terrible," and gives the man his whiskey and beer.

Two weeks go by and the same man goes to the bar... He walks in and says, "Hey Joe, how about fixing me up with 8 shots of whiskey and 8 bottles of beer?"

The man says, "Well my other boy just come home from college and I found out that HE'S gay."

Joe says, "Man, that's a damn shame," and fixes him up with the beer and whiskey.

Three weeks go by and the man comes bursting through the doors and says, "Joe, I want you to fix me up with every f*cking drink you got in the house!"

Joe says, "Geez, doesn't anyone in your family love women?"

Cleanliness is next to Godliness
A guy walks into a pub and sees a sign hanging over the bar:

Checking his wallet for the necessary payment, he walks up to the bar and beckons to one of the three exceptionally attractive blondes serving drinks to an eager-looking group of men.

"Yes?" she inquires with a knowing smile, "can I help you?"

"I was wondering", whispers the man, "are you the one who gives the hand jobs?"

The man replies "Well wash your hands, I want a cheese sandwich!"

You did it again. Whether you make them up or pass them on, they're funny.

Thanks for the laughs.

Bwahahahahaha. I love the Raymond one. I didn't see that coming.

Make them up? I wish I was talented enough to make up jokes.