The Name of the Toon

Hey You Guys!
The world of comics and cartoons has been turned upside down!

Harvey Toon here, reporting on the growing controversy that has cartoon folks everywhere in an uproar. Here in Toonville, not only are the Tooners discussing the news at the water coolers, but the water coolers are voicing their opinions also.

Not since the scandalous marriage of the voluptuous (wolf whistle) Jessica to Roger Rabbit and their shocking bedroom video, have the denizens of this toon burg found themselves the center of so much media attention.

I have in my hands the magazine which contains the photographs that has the town abuzz. I am going to interview some well known cartoon characters on the street. I'll show them the photos and get their reaction. Across the street is a crowd of toon stars milling about. Let's see what they have to say.

Harvey Toon: Fellow Toons, just what do you think of these photos?

Popeye: Well, blow me down!

Tweety Bird: I tot I taw a puddy!

Bill Clinton: I never had sexual relations with that woman. Say, you don't happen to have her phone number do you?

Whoa! How did he get in here? Give me back that magazine, Bill! Go buy your own copy!

There you go folks. You can tell from the reactions of the some of well known male celluloid stars just how shocking the photos in question are. On the other hand, the women of Toonville have refused to comment and would not grant me an interview.

I find it interesting that in this day and age that so many people are offended by nudity. Many celebrities have removed their clothes and bared it all on the silver screen. Why is then that when they pose nude in a magazine, it is considered offensive by their peers? 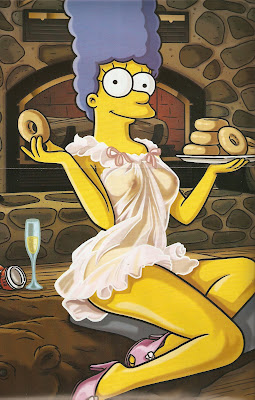 Marge Simpson has posed for a centerfold in Playboy Magazine!

Hey, here comes her husband, Homer. Let's see what he has to say about his wife's photos that leave so little to the imagination.

Harvey Toon: Homer. Homer Simpson, what do think of these nude pics of your wife?

Homer Simpson: Doh! So round and firm!

Harvey Toon: I can see you like your wife's provocative pose.

Homer Simpson: Mmmm ... Can't you see my mouth watering? I love them in my mouth.

Harvey Toon: Yes, she does have nice boobs.

"I tot I taw a puddy!" You gotta be kidding. snerx.

Funny as usual. What do you do on your days off? chuckle.

On a more serious note, why does our society get so uptight about sexuality?

I'm talking about the donuts. Bwahahahahaha.

Marge,you are being very naughty,I'm gonna have to take away your donuts!

He did! He did taw a puddy!

See! Another man who wants the donuts.

The donuts would be better with chocolate. snicker.