The Fruitcake Conspiracy
"Mulder, I got here as fast as I could," said Agent Dana Scully as she squeezed through the crowd of onlookers who had gathered at the scene.

"Scully, glad you could make it," replied her partner, Fox Mulder.

"I heard the reports on the radio. Why are we investigating a homicide?" she asked. "...And what's it got to do with The X-mas Files?"

"Scully, that's the report they're giving to the press. They aren't going to release the truth. It would cause a nationwide panic!"

"O-o-o-kay! What do we have?" she asked kneeling by the covered body.

"The victim," he said while pausing to look at his notebook, "John Armstead, was struck in the head by an alien projectile. That projectile was no doubt fired earthward from a spaceship in a low earth orbit. I submit that its perigee was such as to prevent detection from earthbound observatories. Based upon the position of the victim's body and where the projectile landed, I was able to extrapolate its trajectory. It entered earth's atmosphere from the south southwest. I should be able to triangulate the probable location of said craft." 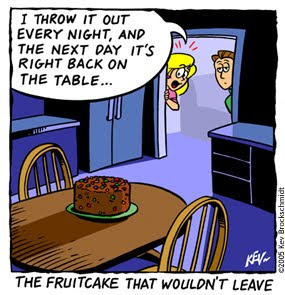 "Scully, haven't I always told you that the truth was out there? Well, what was out there - is now down here." Mulder moved away from the body and said, "Follow me. Wait till you see the projectile!"

"Aha! You're as speechless as I was when I stumbled upon it."

He shook his head and admonished her, "Scully, you don't have to resort to name calling. I've come to expect that from those who'd close down the X-mas Files, but not from my own partner."

"Just look at it, Scully," he said interrupting her. "Its composition is not of this earth. I feel confident in speculating that it is made up of previously unknown elements. It's obviously indestructible as it survived, intact, the entry into our atmosphere. That means it's impervious to extreme heat. Tell me, what would you make of it?"

"Make of it? Me? I'd probably re-gift it, or maybe use it as a doorstop." she replied.

He looked at her crestfallen, "Be serious, Scully. This is the single most important discovery in the history of mankind - proof that we are not alone! All of my life and my entire career I've been laughed at and been made the butt of their jokes. Now ... now they'll want to name this substance after me." He was thoughtful for a moment and announced, "Mulderite! How does that sound for a name for it?" 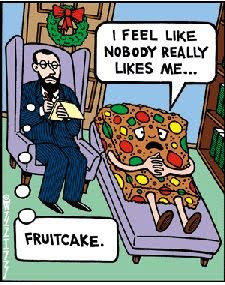 "I have a better one, Mulder," she said placing her fists upon her hips. "Fruitcake."

"Scully, why are you mocking me?" Mulder asked. "Oh, never mind. Let's get it to your lab for scientific analysis. When we break it down into its constituent elements ..."

"Mulder, I can tell you right now what its constituent elements are." With one finger touching in turn the fingers on her other hand she enumerated, "There's going to be all-purpose flour, baking soda, baking powder, cinnamon, nutmeg, candied fruits, walnuts, brown sugar, molasses and maybe some brandy ..."

"That's amazing, Scully. You were able to make that assessment just by looking at the projectile?" He rubbed his finger against his chin and mused, "Imagine, that with their advanced alien technology, those extra-terrestrials were able to produce a weapon comprised of elements identical to those found on earth."

"Mulder! It's not a projectile. It's not a weapon from outer space. It's a fruitcake!"

"A cleverly disguised one, wouldn't you say?"

"You're incorrigible," she exclaimed in exasperation. She handed him a copy of a police report, "Look, here's the report of the investigation held by the local law enforcement officers. Mr. Armstead and his wife had gotten into a heated argument regarding his fidelity. He stormed out of the house with his wife shouting after him. In a rage, she picked up the handiest object she could find and threw it at him. It just happened that that object was a fruitcake that she'd been using as a doorstop."

"Scully, do you realize what you are saying?"

"Of course!" she exclaimed. "Armstead died as a result of being struck with a fruitcake."

"Listen to you, Scully," Mulder shouted. "That means this is an X-mas Files case."

"It's been long theorized that there is only one known fruitcake in existence. It has some strange, and as yet unexplained, ability to appear unexpectedly almost anywhere in the world. For some reason this ability manifests itself right around the Christmas holiday." He puffed out his chest and added, "It is possible that there in front of us is a second one!"

She shook her head, "You might be right. I'm looking at two of them this very minute."

He scanned the police report and said with an excited smile, "Scully, it's says here that the Armstead's have been married for thirty-five years. I ask you, why would she wait until now to inexplicably kill her husband?"

"Mulder, they were fighting. It was an unfortunate accident - a crime of passion."

"Or ... or she was under alien influence," he countered.

"Think about it, Scully. That object, disguised as a fruitcake, could well be a vessel from which something was released into the atmosphere ... perhaps spores which the wife breathed in ... or maybe it housed an alien in gaseous form that entered her body ... or it emanated a mind-controlling signal at a frequency humans cannot hear ... or ... "

( Like this parody? Check out the first X-mas Files case . )

It's always the fruitcake isn't it? Bwahahahahahaha.

Yup - it's all about the fruitcake.

I think we have aliens here in NJ too! I got that "weapon" last year from a friend! thanks for sharing MikE!Love the vocab...