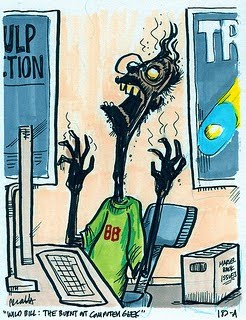 Essentially my blog would be classified as a humor site, even though there is a smattering of some original fiction, sexual content and editorial-like commentaries here and there.

About 80% of my posts are original products of the sometimes twisted thought processes at work behind my eyes. Some of the posts have been lifted, stolen, plagiarized, although I prefer to refer to them as "borrowed," and some have been contributed via e-mailers.

My favorite posts have been those that took the form of satire and parody. In that genre I have often taken liberty to poke fun at celebrities, especially politicians. (I miss George W. Bush! Like professional comedians, joke writers, and other humor Bloggers our previous President provided us with a bountiful source of material.)

Those who read my blog know that I have generally steered clear of politics with any seriousness in my postings. Today, on my 5th Blogiversary, with this posting I've decided to teeter on the serious side. 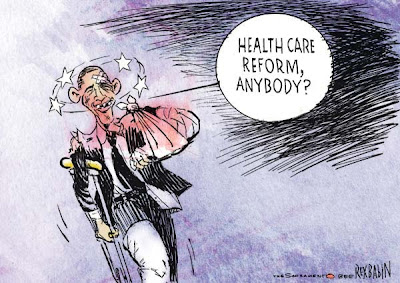 As it has gained national attention, I'm sure that most of the readers are only too aware of the special election that took place yesterday in the state of Massachusetts. That election was held to fill the vacant Senatorial seat of the late Edward M. Kennedy.

The heavily favored Democratic candidate and current Massachusetts Attorney General, Martha Coakley, virtually invisible with few public appearances, decided to wage a defensive attack campaign against her Republican opponent Scott Brown. After all, she must have been thinking, what chance did a Republican candidate have in a state that has been historically and predominately the playground of the Democratic Party? How dare a Republican make a bid for Teddy's sacred throne?

She had the backing of the ruling Democratic Party. She was endorsed by the Clintons and of course, the Kennedy family. Labor unions and powerful lobbyists were backing her. Two weeks ago the polls showed her with a 30-point lead. How could she lose? 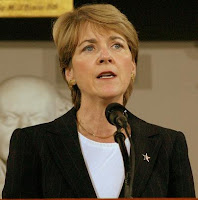 I don't know that it had anything to do with the outcome, but did I mention that she's blonde? The way she ran her campaign and her arrogant demeanor was reminiscent of a former First Lady who felt entitled to a certain desk in the Oval Office.

The critical importance of that Senate seat to the Democratic Party was only too evident when Air Force One, bearing President Obama, landed at Logan International Airport in Boston. By golly, she must have thought, with the President of the United States in her corner and speaking in her behalf, how could she lose? She needed to look no further than the states of Virginia and New Jersey where Obama flew to the aid of the Democratic candidates there. Oops! Both of those candidates lost!

41 - The Winds of Change. The winds are blowing! Martha Coakley's defeat and Scott Brown's victory are just a precursor of things to come as long as our government maintains a status quo.

One thing is certain. Those 2000 pages of gobbledygook that Obama calls a health plan is earmarked for the circular file. It is unacceptable in it present language and must be rewritten. Thanks to Martha Coakley and her poorly run candidacy that will happen.

The winds of change are blowing and in 2012 they will hold open the door while the next President enters and ex-President Obama exits 1600 Pennsylvania Ave.

As a rule I never state verbally or in this blog espouse my political views. This is the first time that I have publicly stated that I voted for a particular candidate. I voted for Scott Brown - not because he's a republican - (I am an unyielding independent voter and refuse to commit to a Party) - but because I felt he was the best candidate for the job - and that he represents that very important and needed 41st seat.

Good for you. I loved watching this unfold yesterday. He is indeed the best candidate for the job. What bolstered his campaign was his statement about it not being the Kennedy seat, not the liberal seat, but the peoples seat. That did it for me.

I think that election had the attention of the whole country.