You're Lost Between Baby Boomer & Generation X If:
You remember Jordache jeans with a flat-handle comb in the back pocket was cool.

Any photograph of you shows you wearing an Izod shirt with the collar turned up.

You know any "Weird Al" Yankovic songs by heart.

You were once bowled over by the technological excellence of such products as Atari, IntelliVision, TelStar and Coleco.

You remember the premier of MTV -- or worse yet, you remember its predecessor, "Friday Night Videos."

A predominant color in your childhood photos is plaid.

You remember when music that was labeled "alternative" really was alternative, and when "alternative comedy" was really funny.

You took family trips BEFORE the invention of the minivan.

You rode in the back of the station wagon facing the cars behind you.

You've recently horrified yourself by using any one of the following phrases: "You know, back when...," "When I was your age...," or "When I was younger..." 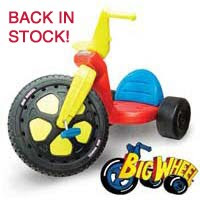 You remember with pain the day the Green Machine hit the streets (or the sidewalks), instantly making your Big Wheel obsolete.

Schoolhouse Rock played a HUGE part in how you learned things like grammar, math and history. (A big hint here is if the only way you can recite the Preamble to the Constitution is by singing it.)

You ever dressed to look like someone in a Madonna, Cyndi Lauper or Duran Duran video.

You remember your first kiss with someone having happened while either "Leather and Lace" or "Crazy for You" was playing.

The age-old question "Where's the beef?" still makes you laugh.

You remember when film critics raved that no movie could ever possibly have more advanced special effects than "TRON."

Your jaw would ache by the time you finished one of those brick-sized packages of Bazooka.

You had a crush on Ted the photographer on "Love Boat," Gage from "Emergency," or Ponch from "CHIPS."

Your hair at some point in time in the '80s could only be described by saying "I was experimenting."

You've ever shopped at Benetton.

When you heard Boy George singing "Do You Really Want To Hurt Me?" - you let loose with a resounding "YES!"

You're starting to believe that having the kids in school year-round wouldn't be such a bad idea after all.

You're currently employed doing something that has absolutely nothing to do with your college major.

U2 is too popular and mainstream for you now. 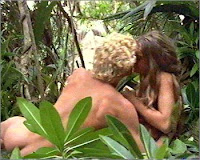 You were too young to see "Blue Lagoon," so you just had to settle for the second-hand reports.

You remember trying to guess which episode of "The Brady Bunch" it was by the first scene.

You had a front-row seat (i.e., blew off one or more classes) for Luke and Laura's wedding on "GH."

Your parents wanted you to attend medical school, but you decided it was pointless since Quincy got all the babes anyway.

You know who shot J.R.

You recall when Love's Baby Soft was in every girl's Christmas stocking.

You were unsure if Diet Coke would ever catch on. (Related item: you were sure that "New Coke" would NEVER catch on.)

You know all the words to the double-album set of the "Grease" soundtrack.

This rings a bell: "My name is Charlie, and they work for me."

You've ever had a Dorothy Hamill haircut.

You sat with your friends on any given Friday night circa 1982 and dialed 867-5309 to see if Jenny was actually there.

"All skate, change directions" means something to you.

You've ever owned a pair of rainbow suspenders like the ones Mork used to wear.

You bought a pair of Vanns and wanted to order a pizza in history class so you could be just like Jeff Spicoli. (Related item: if you've ever smacked yourself in the head with a shoe and exclaimed, "I'm so wasted!")

You owned a Preppy Handbook.

You remember when movies were only PG and R.

Your answer to the "Maryanne or Ginger?" debate has never changed.

You learned to swim at about the same time "Jaws" came out....and still carry the emotional scars to prove it.

You remember when your cable TV box had a sliding selector switch... and your "cable remote" was connected to the TV by a CORD!

Your parents paid $2,000 for a top-loading VCR that was almost the size of a coffee table.

You found nothing strange about Bert and Ernie living together.

You remember having a rotary phone. 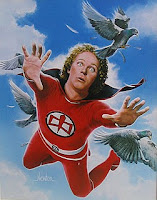 You actually believed that Mikey, famed kid on the Life cereal commercials, died after eating Pop Rocks and drinking a Coke.

"Members Only" jackets...say no more.

And lastly, a song that will stick in your head for the rest of the day: ...you actually remember the words to the theme song of "The Greatest American Hero."

before there were mini vans there were compact vans and full size vans.as far as the other stuff i remember most of that stuff and i am a Boomer! Oh by the way before atari the was pong with 2 players.it was an electronic game of ping-pong.

oh man, you just described my whole life. clearly i am sandwiched in there. i while back i did a post suggesting we be called the sesame street generation. ;)

Do you remember my post of several years ago, in which I wrote of Carol and me grossing out our daughter (who in her younger days had been a HUGE fan of the Dukes of Hazzard)? We were all three a car. I looked out at a long train going by, hauling nothing but hopper cars full of coal. I commented, "Look, a Roscoe."

Carol, used to my puns, glanced at it and said deadpan, "Yep, a Roscoe P."

My daughter is still groaning.

I remember PONG. It was made by Magnavox and if I remember right the device was called Intelevision.

The post described a great slice of my life too.

LOL! I'm glad I evoked a memory from the past. I wonder if Christina remembers that!

New Diet Taps into Revolutionary Plan to Help Dieters Get Rid Of 20 Pounds in Only 21 Days!