Blonde in One Eye

When asked why such a long password, she said she
was told that it had to be at least 8 characters long and
include at least one capital. 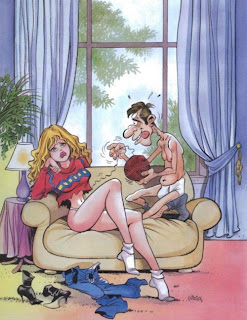 <-- Tiffany realized her date was beginning to unravel.

A blonde was playing Trivial Pursuit one night. It was her turn and she rolled the dice, and landed on "Science & Nature."

Her question was, "If you are in a vacuum and someone calls your name, can you hear it?"

She thought for a time and then asked, "Is it on or off?"

After hearing that milk baths would make her beautiful, a blonde left a note for her milkman to leave 15 gallons of milk. When the milkman read the note, he felt there must be a mistake - she probably meant 1.5 gallons. So he knocked on her door to clarify her note.

The blonde came to the door and the milkman said, "I found your note to leave 15 gallons of milk. Did you really mean 15 gallons or did you mean 1.5 gallons?"

The blonde said, "I want 15 gallons. I'm going to fill my bathtub with milk and take a milk bath."

The blonde said, "No. Just up to my breasts."

She Was Soooooooooooooo Blonde:
She took the ruler to bed to see how long she slept.

She thought General Motors was in the army.

She thought Meow Mix was a CD for cats.

At the bottom of the application where it says "sign here," she put "Sagittarius."

She tripped over a cordless phone.

She spent 20 minutes looking at the orange juice can because it said, "concentrate."

She told me to meet her at the corner of "WALK" and "DON'T WALK."

She asked for a price check at the Dollar Store.

She studied for a blood test.

She thought she needed a token to get on "Soul Train."

She sold the car for gas money!

When she missed the 44 bus, she took the 22 bus twice instead.

When she went to the airport and saw a sign that said "Airport Left," she turned around and went home.

When she heard that 90% of all crimes occur around the home, she moved.

She thinks Taco Bell is the Mexican phone company.

If she spoke her mind, she'd be speechless.

She had a shirt that said "TGIF," which she thought stood for "This Goes In Front."

She sent me a fax with a stamp on it.

She thought a quarterback was a refund.

She put M&M's in alphabetical order.

She thought Eartha Kitt was a set of garden tools.

You gotta admit that it takes some smarts to come up with 8 characters and a capital. snerx

Great way to start my week.

I'm with Jack on the password. Bwahahahahahaha. Makes sense after the explanation though. Wait, I'm a blonde.

Yep, you gotta hand it to her to come up with that.

As Mr. Spock on Star Trek would say, "Her logic was flawless."