My e-mail box was getting full. I thought it was time to cull through it, pick out the good stuff and post them here to share with others. - Hale McKay

Poetry in Motion
There was a woman who wanted bigger breasts so she went to her doctor, Dr. Jacks, and questioned him about implants.

He explained, "Before you do anything too serious, there is a method that has worked for a lot of my patients. Every morning when you wake up, rub your boobs and say "Scoobie-doobie-doobie, give me bigger boobies."

She did this faithfully for weeks and noticed one day that they actually were getting bigger, she was very impressed. One morning she woke up, late for work and very rushed. By the time she got on the bus she realized that she forgot to go through her routine.

So standing on the bus, while rubbing her boobs she recited, "Scoobie doobie doobie, give me bigger boobies."

A man standing next to her said, "You must go to Dr. Jacks."

He replied, "Hickory dickory dock, give me..!"

Stop at your pharmacy and go to the thermometer section and purchase a rectal thermometer made by Johnson & Johnson. Be very sure you get this brand.

When you get home, lock your doors, draw the curtains and disconnect the phone so you will not be disturbed.

Change into very comfortable clothing and sit in your favorite chair. Open the package and remove the thermometer. Now, carefully place it on a table or a surface so that it will not become chipped or broken.

Now the fun part begins Take out the literature from the box and read it carefully
You will notice that in small print there is a statement:

"Every Rectal Thermometer made by Johnson & Johnson is personally tested and then sanitized."

Now, close your eyes and repeat out loud five times,' I am so glad I do not work in the thermometer quality control department at Johnson & Johnson.'

HAVE A NICE DAY; AND REMEMBER, THERE IS ALWAYS SOMEONE ELSE WITH A JOB THAT IS MORE OF A PAIN THAN YOURS!

No virus or unsanitized rectal thermometers were found in this incoming message.

I was shopping at the supermarket I came upon a unique piece of Nickelodeon merchandising - a Spongebob Squarepants Musical Rectal Thermometer! Yes, it’s musical. And yes, it’s clearly marked for rectal use. It actually plays the Spongebob theme in your ass when your temperature is taken!

Feeling unappreciated at work lately?
Ignorance might be bliss, but something's gotta start to smell... 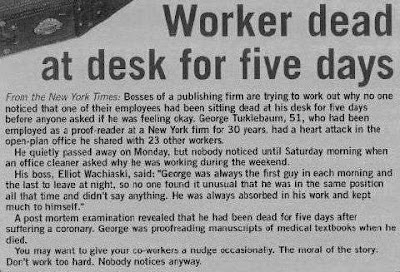 The Year: 1947
Some of you old enough will recall and others have heard the stories that on July 8, 1947, 63 years ago, witnesses claim that an unidentified flying object (UFO) carrying five aliens aboard crashed onto a sheep and mule ranch just outside Roswell, New Mexico. This is a well known incident that many say has long been covered up by the U.S. Air Force and other federal agencies and organizations.

However, what you may not know is that in the month of of April 1948, nine months after that historic day, the following people were born:

See what happens when aliens breed with sheep and jackasses? I hope this bit of information clears up a lot of things for you. It certainly did for me.

No wonder they support bills to help illegal aliens!

World Record
Are you aware that a new world record has been set for the HIGH JUMP from a KNEELING position ?

The record (0.757 metres) - remember this is from a KNEELING position - was set recently on a beach near Montpellier in Southern France .

This photograph was taken a split second before the jump - but it gives you an idea as to how it was achieved..... 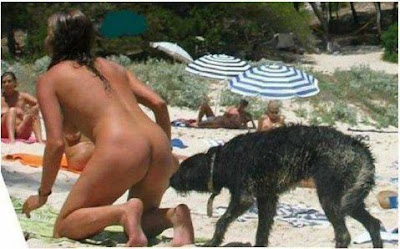 This post gives additional meaning to "pain in the ass".
snerx

You can go to this site for confirmation. chuckle

You're not the only one who needs to get a life beyond cyberspace. snerx.

I loved them all. I love the way your mind works. Mine does about the same.

New meaning to a royal pain.

It's good see that I'm not alone.