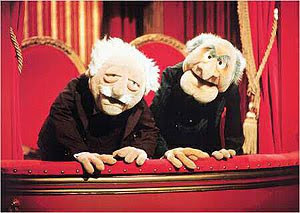 What if Statler & Waldorf were late night talk show hosts?

Statler: Did you hear about all that money they gave Conan O'Brien to walk away?
Waldorf: Hey, they had to shut him up somehow.
Statler: You mean to stop talking about his contract?
Waldorf: No, his monologues.

Statler: Well, they finally filled Ted Kennedy's Senate seat.
Waldorf: Yeah, with a lot room left over in that chair.
Statler: What's worse than a Senatorial session without Ted Kennedy actually being in it?
Waldorf: How about a session WITH him in it?
Statler: They called him the Liberal Lion.
Waldorf: Yep, his lyin' was liberal!

Waldorf: Did you see our guest acts rehearsing?
Statler: They aren’t half bad. *
Waldorf: Nope, they’re ALL bad!
Statler: What’s all the commotion backstage about?
Waldorf: That dancing dog ran away.
Statler: Well, you know what that makes him?*
BOTH: Smarter than us!

Statler: What's with the tomatoes?
Waldorf: They're for our first guest.
Statler: That bad, huh?
Waldorf: Yep. It's someone they didn't want on the Tonight Show?
Statler: Oh? Who is it?
Waldorf: Jay Leno!
Statler: Ho! Ho! We're gonna need some more tomatoes!

Waldorf: I hear Leno's gonna be off the air until after the Winter Olympics in Vancouver.
Statler: Is he going there to watch them?
Waldorf: No. They're gonna use his chin as a ski run.
Statler: Ho! Ho! Does that means he's a mogul?

Statler: How do think we'll do going up against that other late night host?
Waldorf: What host is that?
Statler: You know, the one who sounds like he works for the post office?
Waldorf: You mean Letterman?
Statler: Yeah, the one with the gap-toothed smile.
Waldorf: At least he has teeth!

Statler: The network gave us our own show - so why did they leave us up here in this balcony?
Waldorf: So they could hide the puppeteers.
Statler: What puppeteers?
Waldorf: The ones with their arms up our asses!
Statler: Oh! ...And all this time I thought I was gonna need a stronger physic! Statler: Whoa! That was a moving experience!
Waldorf: You liked that act that much?
Statler: No, the puppeteer just opened and closed his fist!

Statler: You know, I think my puppeteer forgot to remove his watch.
Waldorf: Why do say that?
Statler: Coz I just had my best movement in a long time.
Waldorf: Well, he is out of practice.
Statler: Pardon the pun, but what's he been up to?
Waldorf: He was unemployed.
Statler: Another victim of the economy, eh? What did he do?
Waldorf: He was a proctologist. 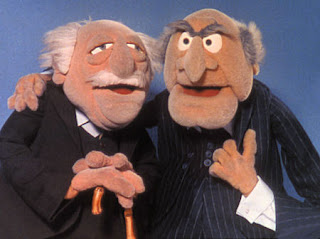 Waldorf: Statler, wake up. It's time for the next act.
Statler: (YAWN!) What act is it?
Waldorf: It's the HOOTERS finalists for their national bikini contest.
Statler: Oh boy! Let's synchronize our pace makers! *
Waldorf: Hooters are owls. I find it disturbing they call a woman's breasts that.
Statler: Yeah. WHO's gonna look at 'em anyway?
BOTH: WE are!

Waldorf: Help! Help! Statler just fell out of the balcony!
Statler: (From below) I'm okay! One of the Hooters girls caught me!

Waldorf: I thought you were okay. You've got two black eyes!
Statler: (Back in the balcony) It only hurts when I blink.
Waldorf: What happened?
Statler: I thought I'd give that puppeteering thing a try.
Waldorf: You didn't! You tried to put your hand up her ...?
Statler: She didn't believe me when I said I wanted to be a proctologist.
Waldorf: (Staring at co-host in silence)
Statler: Ouch! (Rubs eyes) I blinked. 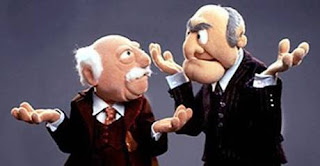 Statler: I feel like singing a song for the audience.
Waldorf: Can you sing tenor?
Statler: Sure. Why do you ask?
Waldorf: Wait until I'm ten or eleven miles away before you start singing. * 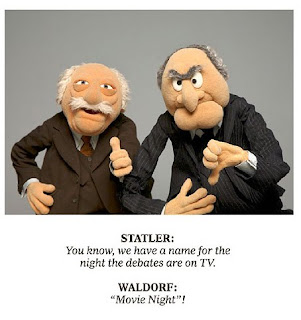 * (Lines indicated with the red asterisk were actual gags aired on the Muppet Show.)

I originally had posted this on Saturday (1/23), but because of the weekend, I don't think anyone read it. So I repositioned it for this date.

I wasn't around this past weekend and I mark everything in my reader as read when I get home on Sunday. Way too much pressure to try to get through 2-3 hundred posts.

I loved the Conan and Kennedy ones the very best. Probably because I can't/couldn't stand either one.

Great bunch of zingers!Sandee,not to mention you were busy trying the fix the mess that I created.

That's the thing I like about parodies, you get to poke fun at celebrities and there is always someone who agrees with them.

Thanks, glad you enjoyed them.