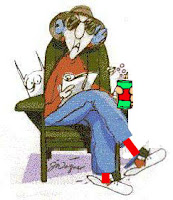 My one day of employment!

So after landing my new job as a Wal-Mart greeter, a good find for many retirees, I lasted less than a day...

About two hours into my first day on the job a very loud, unattractive, mean-acting woman walked into the store with her two kids, yelling obscenities at them all the way through the entrance.

I said pleasantly, 'Good morning and welcome to Wal-Mart. Nice children you have there. Are they twins?'

The ugly woman stopped yelling long enough to say, 'Hell no, they ain't twins. The oldest one's 9, and the other one's 7. Why the hell would you think they're twins? Are you blind, or stupid?'

So I replied, 'I'm neither blind nor stupid, Ma'am, I just couldn't believe someone slept with you twice. Have a good day and thank you for shopping at Wal-Mart.'

My supervisor said I probably wasn't cut out for this line of work.

A funeral service is being held for a woman who has just passed away.

At the end of the service, the pallbearers are carrying the casket out when they accidentally bump into a wall, jarring the casket. They hear a faint moan. They open the casket and find that the woman is actually alive! She lives for ten more years, and then dies.

Once again, a ceremony is held, and at the end of it, the pallbearers are again carrying out the casket. As they carry the casket towards the door, the husband cries out, "Watch that wall!" 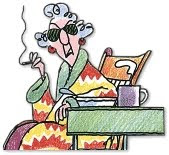 A little old lady, well into her eighties, slowly enters the front door of a sex shop. Obviously very unstable on her feet, she wobbles the few feet across the store to the counter. Finally arriving at the counter and grabbing it for support, stuttering she asks the sales clerk, "Dooo Youuuu have dilllldosss?"

The clerk responds, "Yes we do."

A lady goes to the bar on a cruise ship and orders a Scotch with two drops of water.

As the bartender gives her the drink she says, "I'm on this cruise to celebrate my 80th birthday and it's today....."

The bartender says, "Well, since it's your birthday, I'll buy you a drink. In fact, this one is on me."

As the woman finishes her drink, the woman to her right says, "I would like to buy you a drink, too."

The old woman says, " Thank you. Bartender, I want a Scotch with two drops of water..."

"Coming up," says the bartender

As she finishes that drink, the man to her left says, "I would like to buy you one, too."

The old woman says, "Thank you.Bartender, I want another Scotch with two drops of water."

"Coming right up," the bartender says.

As he gives her the drink, he says, "Ma'am, I'm dying of curiosity. Why the Scotch with only two drops of water?"

The old woman replies, "Sonny, when you're my age, you've learned how to hold your liquor. Holding your water, however, is a whole other issue."

Glad you liked them.

I stole the funeral one. I gave you credit of course.

A good joke is one that's worth stealing.