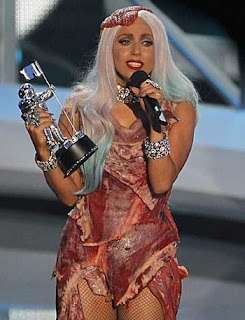 Accepting an award at the MTV Awards ceremony for her hit video, Bad Romance, she looked as if she'd first stopped off at a deli counter.

Fresh from the meat locker, Lady Gaga walked onto the stage attired in an outfit made out of animal flesh.  There was quite a buzz in the crowd of her gathered peers, but I suspect that the sound was being made by the flies trailing in her wake.

It should come as no surprise that her wardrobe drew immediate ire from PETA.  Said a spokesperson, "... it likely smelled and was probably crawling with maggots."

I wonder what cuts of meat were used for the apparel?  Flank steak?  No, it was probably skirt steak!  Actually the meat resembles the Italian deli meat,  prosciutto. 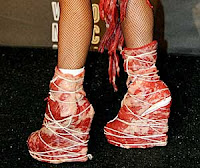 Her attire was topped off with a 16-oz steak strategically positioned atop her head.  Her meaty outfit also included what looked like pot roast platforms; the shoes were even wrapped in string.

What fashion-conscious woman wouldn't want to complete a look without a matching purse?  Cher, who presented the award to her, was left holding the bag while Gaga took the microphone to espouse her acceptance.

Professed Vegan, Ellen Degeneres offered Lady Gaga her own version of edible clothing when she presented her with a bikini and skirt made from green vegetables.  Makes sense to me!  After all, a salad usually does compliment a meat dish.

It was rumored that Lady Gaga's ensemble was fashioned from a side of beef which was tenderized by Sylvester Stallone reenacting a scene from his movie, Rocky.

This is not  the first time that meat has been used as an article of clothing.  Don't you remember the bacon bra?  I'm surprised that it never gained much popularity with the distaff set.  After all, what man doesn't like bacon and looking at boobs?

During her appearance at the awards show I had to pity her entourage, especially her body guards.  Can you imagine her fate if the Bumpus' dogs from A Christmas Story caught scent of her raiment?  What if she were accosted by a bunch of hungry men armed with bottles of A-1 Steak Sauce?

Of course, in the end she probably saved money for catering charges for the party after the ceremony.  Her friends and guests would only have to peel off a strip here and there. You like it rare?  Or well done?

A thought occurred to me ...

What if she and some guy decided to get intimate, you know get down to the meat of the matter?  Think about it, if they did the dirty deed ... then they would surely be makin' bacon!

Now that I've managed to lose my appetite, I gotta go look for that bottle of Pepto-Bismol.

It boils down to this, "Lady GaGa" was being true to herself, and that is what makes her so fabulous! But, I did like your mention of the "dirty deed"...if they got hungry well....'nuff said!
Cathy

I guess Lady Gaga ultimately made herself a little more than a "piece of meat."

Let me guess, you're not exactly a big fan of Lady Gaga.