I looked up from my newspaper and said, "Why can't you look like you did when we were first got married?" 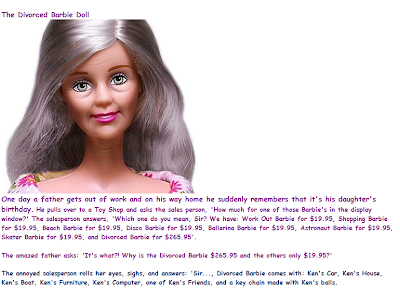 A daughter comes home from the Peace Corps in Uganda and surprises her mother, who is in the process of lighting the Friday night candles and serving the matzoh ball soup. The mother is so thrilled she can't stop hugging and kissing her daughter.

Finally she says, "Sit down, darling. Tell me all about what you were doing."

Her daughter says, "Mom, I got married."

"How could you do that without telling me? What's he like? What does he do? Where is he?"

"He's waiting outside on the porch while I tell you."

"What are you talking about? Bring him in! I want to meet my new son-in-law."

The daughter brings him in, and to her consternation, the mother sees a black man standing before her wearing a big grin, a feathered cod piece, an enormous headdress, animal tooth beads and he is holding a very tall spear in an upright position.

The mother grabs her daughter, slaps her back and forth on both cheeks and screams, "Dummy! Stupid idiot! I said RICH doctor!" 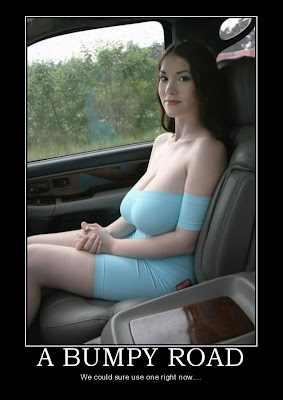 A recent Survey has determined that there are 7 kinds of sex:

The 1st kind of sex is called:  Smurf Sex.
*This kind of sex happens when you first meet someone and you both have sex until you are blue in the face.

The 2nd kind of sex is called:  Kitchen Sex.
*This is when you have been with your partner for a short time and you are so needy you will have sex anywhere, even in the kitchen.

The 3rd kind of sex is called:  Bedroom Sex.
*This is when you have been with your partner for a long time. Your sex has gotten routine and you usually have sex only in your bedroom.

The 4th kind of sex is called:  Hallway Sex.
*This is when you have been with your partner for too long. When you pass each other in the Hallway you both say 'screw you.'

The 5th kind of sex is called:  Religious Sex.
*Which means you get Nun in the morning, Nun in the afternoon and Nun at night. (Very Popular)

The 6th kind is called:  Courtroom Sex.
*This is when you cannot stand your wife any more. She takes you to court and screws you in front of everyone.

And last, but not least, The 7th kind of sex is called:  Social Security Sex.
*You get a little each month, but not enough to enjoy yourself.


-The above image and list were borrowed from:  Mushy

I have to say they left me "busting at the seams"...Hilarious.....sign me Blue Smurf-Cathy

LOL! Thanks for the comments, Blue Smurf Cathy.