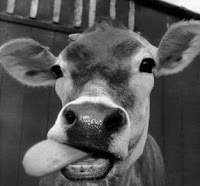 This here is a Tongue-In-Cheek Production.

And iffin y'all doesn't knows what tongue-in-cheek means, then y'all deserves a tongue lashing! And iffin ya really wants to knows, go look it up. You know, gurgle it.

Ya know what really gets my goat? Well, jest 'bout anything gets my goat what ain't right as fer as I can see. But this here post is all 'bout what's a-gettin' my goat this very minute. And my goat started to gettin' got when I wuz a sittin' in my Lazy Boy recliner a lookin' thru my collection of video pickture shows.

Now, I ain't braggin' but I has one of the biggest collections in the whole holler exceptin' maybe fer my cuzzin Clem. He jest has 'em lyin' all over the place and not in any kind of order a'tall. Me, I keeps 'em organized so's I can find 'em real easy like when I wants to see a p'ticular one.

I likes to keep 'em 'ranged by what what kind of pickture and what's in 'em. Some of my favorites I keeps close to my chair a locked up in my tool box. They's the ones wiffin' a lot of T&A. And no, I'm not a vegetablarian - I don't have movies 'bout Taters and Asparagus!

Anyways, back to what it was what got my goat. I think I'm a purty good judge of what a good movie is. Hell, I aint no conasewer ... Ya know, that's one dumb word. It sounds like a 'scaped pris'ner what tried to hide inna septic tank. But I'm a digrestin' ...

Like I was a gettin' at, I got me a whole bunch of good watchin' movies. And ya know what? Not a single nary one of 'em ever won one of them Academic Awards. In fact, I don't think they was even dominated fer an Oskar.

I think all them Hollywood types a been usin' that stuff like cocaine and Rogaine, exceptin' theys a been puttin' the one fer the head up theys noses and the udder way 'round. And fer the record, I bet theys can't figger out which orfices they's s'posed to put chapstick and Preparation H either.

So anyways, this is leadin' up to what's gonna be makin' my goat feel better. I done decided to pick out some movies and give out my Oskar prizes. Now don't y'all be laffin' at my s'lections, coz I'm serious. These are Oskars that them Hollywood types should a been givin' out. 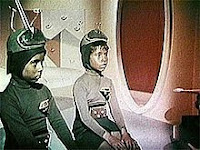 Best Voice Characterization
Dom DeLuise as the voice of Pizza the Hutt from the epic 1987 space adventure, Spaceballs.

Best Actress
Allison Hayes as Nancy Archer from the 1958 hit, Attack of the 50-Foot Woman. This film demonstrates the old saying 'that Hell hath no fury like a woman scorned.' So if you're planning on cheating on your wife, check the skies first to make sure there ain't no giant red balls a floatin' around. (I still wonder why it was that some of her clothes grew wiff her.)

Best Actor
James Arness as the Thing from the classic 1951 Science fiction thriller, The Thing from Another World. When an actor who plays a Marshall of Dodge City who can't seem to recognize the fact that Miss Kitty wants him to bed her, can take on a role as a blood craving celery stalk which terrorizes an arctic military base - now that's some powerful actin', folks. Not to take anything from John Carpenter's remake, but his Thing was all done by special effects.

Best Makeup
The 2000 Sci-Fi megahit, Battlefield Earth had fatastic makeup. I was really convinced that John Travolta as Terl and Forest Whittaker as Ker were really aliens from the planet Psychlos.

Best Director
Ed Wood, Jr. for the 1959 classic, Plan 9 from Outer Space. The plot of the film is focused on extraterrestrial beings who are seeking to stop humans from creating a doomsday weapon that would destroy the universe. In the course of doing so, the aliens implement "Plan 9", a scheme to resurrect Earth's dead to get the planet's attention, causing chaos.

After the tomatoes have killed a lot of people, they tomatoes are cornered in a stadium. "Puberty Love" is played over the loudspeaker, causing the tomatoes to shrink and allowing the various people at the stadium to squash them by stomping on them repeatedly. Fairchild, meanwhile, is cornered by a giant tomato wearing earmuffs. Dixon saves her by showing the tomato the sheet music to "Puberty Love." He professes his love to her, in song.

I love the ending- when a carrot rises from the Earth and says "All right, you guys. They're gone now."

Well folks, there y'all have it. Iffin I was to have a say so of what Oskar Awards should be given out, these would be some of my picks. Yer lists might not agree with mine, but who cares? This is my list. Go make yer own list!

Got to love those classic cult films. They aren't on TV often enough.

I agree. Thanks for dropping by and leaving a comment.

There is shocking news in the sports betting world.

It has been said that every bettor must watch this,

Watch this or quit placing bets on sports...