IMPORTANT NOTICE: All mini-marts, convenience stores, 7-11s, & many motels will be closed this week, due to a death in the family. We apologize for any inconvenience this may cause !!!!!!!

The above image is a screen shot that I couldn't make clear. Anyway - it is Osama bin Laden's last Facebook entry:


"BRB. Someone's at the door."
And the "LIKE" was clicked by: the Navy Seals


How Did They really Find Him?

(b) Whereabouts reported when he wouldn't pay for Girl Scout cookies

(c) Reported by followers because he refused to bathe (U.S. fixed this.) 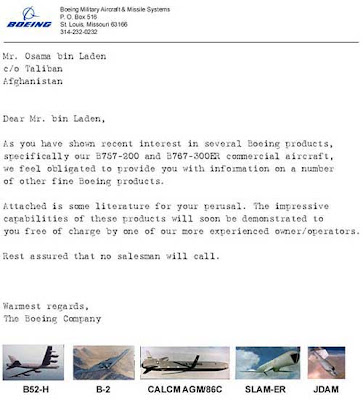 LOL I love that letter from Boeing to Osama.

I agree re: the letter. When I came across it, I just had to post it here.

I have no problem if anyone uses my picture.
But it costed me quite much work to make it so you should really mention me as the creator.
My name is Dietmar Fuessel.
www.dietmarfuessel.com