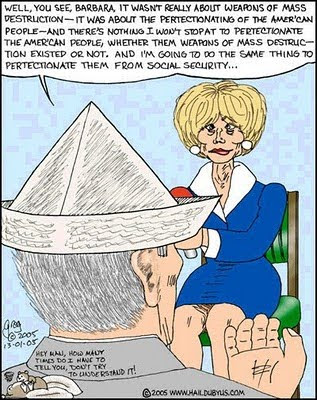 ~
Bawbwa: Welcome folks to my excwusive wate night interview with Pwesident Dubyew. Welcome Mr. Pwesident!
~
Dubyew: Thank you, Barbara. And hello, my fellow Americans.
~
Bawbwa: We understand you just had a compwete check-up. I twust everything was alwight.
~
Dubyew: That's right. I got a clean bill of health. In fact, I got weighed just before coming here.
~
Bawbwa: You did? Did you wike it?
~
Dubyew: What's that?
~
Bawbwa: When you got weighed, you must have wiked it. Did Waura wike it too? I'll bet she just wuved it!
~
Dubyew: No, no, Barbara. Laura wasn't even there!
~
Bawbwa: Then who did you weigh, Mr. Pwesident?
~
Dubyew: I didn't weigh anyone. They weighed me!
~
Bawbwa: They? Mr. Pwesident, are you twying to tell me you got weighed in a menage-a-twa with two women?
~
Dubyew: Two women? Oh, I see. You're talking about the dessert I had with lunch. It was lemon meringue.
~
Bawbwa: Women mewang? Is that what high wanking officials call phiwandering now a days?
~
Dubyew: Barbara, I feel like I'm being interviewed by Elmer Fudd!
~
Bawbwa: Elmer? Elmer is my speech instwuctor. He was getting weighed with you too?
~
Dubyew: Barbara! Why are you removing your blouse?
~
Bawbwa: Sowwy, but I'm getting wather wandy! All this talk aboutt getting weighed is making me vewy wight-headed.
~
Dubyew: Ah, your network wants to go to a commercial, right now.
~
Bawbwa: No! It's getting wate. We still have a wot of gwound to discuss.
~
Dubyew: Yes. Didn't you want to talk about Saddam?
~
Bawbwa: You mean Sa-dawm? You know rhymes with bomb.
~
Dubyew: Sodomy? Barbara, what kind of subject is that?
~
Bawbwa: Well, you bwought it up. (Hee-hee!) Is that why you cwossed your wegs?
~
Dubyew: Sa-dawm? Sodomy? I meant Saddam .. you know..in jail..Hussein!
~
Bawbwa: Hmm, yes I guess it's sad it's Quayle whose insane. But why bwing up that woser?
~
Dubyew: I just noticed, Barbara, without your blouse I can see that you have love handles. Maybe you should get weighed.
~
Bawbwa: Mr. Pwesident! Are you saying you want to weigh me?
~
Dubyew: I'll tell you what, we'll get weighed together.
~
Bawbwa: Well, people usuwalwy get weighed together. Don't you and Waura?
~
Dubyew: You want Laura to get weighed with us too?
~
Bawbwa: Well, all I can say, is that tonight will be a gwound bweaking wesson for the network.
~
Dubyew: Wesson oil? Sounds kinky.
~
Bawbwa: No wesson. You know wike a histowy wesson.
~
Dubyew: Ah. A lesson to deal with slippery situations. I see.
~
Bawbwa: A wesson in wate-night pwogwamming! This pwogwam is only on for one hour. There's not much time weft.
~
Dubyew: It doesn't take but a minute or two to get weighed.
~
Bawbwa: Why, Mr. Pwesident. You mean to tell me you are a minute man? Uh, never mind. They will wish they awowed at weast two hours to show America a wusty Bawbwa weighing Dubyew and Waura wive at the same time! The people will simpwy wuv it!
~
Dubyew: No cameras, Barbara. It is a private matter getting weighed. Come on, let's go get weighed.
~
Bawbwa: Good night, America.
~
Dubyew: Hey! That's my wine!
~
No.199
Curmudgeon responsible for this post: Hale McKay at 12:16 AM