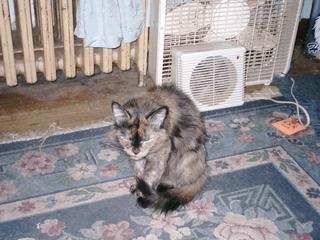 .Sassafras, is the last member of the family. Sassy, her nickname quite apropos, is the feistiest and most feared of the furry denizens of our house.

Her markings are referred to as tortoise-shell. While they cannot all be detected in the photo, there are five distinct colors in her fur. The Vet said she is probably a tabby-Maine Cooncat mix. She is the smallest of our pets, but you'd never know it to watch the dogs walk around the room to stay clear of her path. They give her a wide berth.
....Just as the other beasties had stories of how they came to be here with us, Sassy is no exception. She and a sister were within moments of meeting the maker, unlike her mother and three other siblings.
....I was driving down a street that day eight years ago, when a woman flagged me down. Her car was parked with the flashers blinking. Thinking she was having car problems, an easy mistake to make because she was driving a Yugo, I pulled over behind her. She was snuggling two tiny kittens in her arms. Their high-pitched meowing could be heard the length of her car as I came closer to her.
...."I just rescued these two kittens," she said to me. It was unfortunate, but that particular day I had forgotten the world's smallest violin which I usually carried in my breast pocket. She pointed up the hill above where we stood. There were two snarling Doberman Pinschers standing on a rock outcropping. She then pointed to the ditch below the shoulder of the road next to her door.
....I usually have a strong stomach, but the mutilated bodies of the unfortunate cat and her three kittens was sickening. They had quite literally been torn to pieces. The woman had been driving by and witnessed the mayhem. She said she laid on her horn and had even hit one of the dogs with her bumper. They then ran up the hillside and stationed themselves on the rocks. The woman was terrified that the dogs would comeback to finish what they had started, even if she were holding the kittens.
....I had to tip my hat to her, that was a brave act on her part. I had to admit that even with my presence, the dogs looked poised to come down at any moment. For all I knew, they may have been trained guard dogs or even worse, rabid. I ask why she didn't slowly move to the door of her car and get in. It turns out though, that in her rescue she had locked the door with the engine running.
....I asked if she happened to have a spare key, it was a stab in the dark. Sure enough, she did have a spare, and to this day I still wonder if she ever removed it from the same ring as the other keys. She did happen to have five metal coat hangers - also locked in the car. Oh yeah, she had a cell phone...In the car!
....I took one of the kittens from her and told her to move slowly to my truck. My plan was to at least to put them in the cab out of harms way. If necessary we could jump inside also - out of harms way. It was then that I saw something moved dumb past brave on the list of her qualities. The passenger door of her car was not locked! In the end though, I had to give her a mulligan. I didn't exactly enjoy walking in the ditch and stepping over the remains of the other cats. With one kitten safely stashed on her front seat, I reached across and unlocked the driver's side door.
....Without a thank you or a f**k you, she handed me the other kitten and jumped into her car. She cracked the window and said that she'd keep the one in the car. "You can find a home for that one, right?" She asked or was it an order? Holding a crying kitten, I stood dumbfounded as she sped away, or at least moved as fast as a Yugo could go. A couple of sudden yelps and a heartbeat later I was in my truck.
....I realized, as it squirmed and dug its claw into my bare arm, I had just been saddled with a kitten, weaned maybe for only two days tops. We had a dog and a cat at home already. We were not looking for another pet. I thought that the least I could do was to take it home and give it some milk and some food. We could probably find a home for it.
....I didn't count on my daughter being home from work early. When she saw the tiny head peeking out of my unbuttoned shirt, she was instantly attached to it. I told her the story and thought that maybe that was a mistake. When I mentioned that it happened on the side of a road under a sassafras tree, she had made up our minds for us. Seeing its strong determination to get at the bowl of milk she held in her other hand, she said it sure was a sassy little thing. There it was, Sassy had been given her nick name and the tree I mentioned became her full name. - Sassafras.
....She eventually fit in and became number three on the role call of pets. Now, her gradual acceptance by Queen Oreo, the resident cat in charge of animal affairs, is another story, perhaps for another day.

No.267
Curmudgeon responsible for this post: Hale McKay at 12:35 AM

Oh my, what a story. She is indeed a very lucky cat. I have to give the woman who rescued the kittens a lot of credit. It would have been nice for her to be a little more grateful for your help, but who knows? Maybe she was late for something - or traumatized. I give you a lot of credit for helping out also. You saved their lives. Who knows if the dumb broad would ever have realized that her passenger door was unlocked? That's a great story.

Well point, I have to say that the short story is long on readability. The stories of your pets are likewise very good. I anticipate the next installment in this series, and keep up the good work.