Shrimp On The Barbie 2

(This is part 2 of a satire that began HERE.

frigerated chest. Someone, or something was trapped in there. It had been a harrowing night in the small fishing town of Barbie. He wanted nothing more than to apprehend those behind the crime wave. After that, he wanted to get as far away from his deputy as he could. The fool had gone and shit himself only minutes earlier. He was already beginning to smell rather ripe.

He held his breath as the door swung open. A limp body slumped to the floor, just missed by the sheriff's reactionary shot. The bullet ricocheted off the concrete floor and careened from metal wall to wall before striking a compressor suspended from the ceiling. The smell of ozone wafted from the motor and sparks lept about before the compressor came to a stop. From behind him, Fuzz heard water dripping. He didn't need to turn around. Buster had just pissed his pants too.

He knelt beside the man's body on the floor. It was Dick Bender, the grocer. Harry was relieved to find that he was alive. He was nearly frozen, but he would recover. "Oh, damn," he looked up in the direction of Buster who'd entered the chest to look around. He grimaced figuring Buster had probably thrown up this time. "What's gonna happen to all these Sara Lee desserts with no professor?"

Harry sighed, "Compressor. Compressor!" Shortly at the front of the store, the sheriff completed his questioning of the witnesses. Neither Lottie Butz nor Myna Bigger had seen anything. They assumed that Mr. Bender was using the facilities when they came in. Nearby in one of the aisles, Buster was spraying a couple of cans of Glade into the air. The pine scented one seemed to work the best. Satisfied, he ambled over to the produce department after passing between the two women. Both of them sniffed, aware of an unpleasant bouquet. Mrs. Butz looked at Mrs. Bigger and stated that it smelled like someone had crapped in a Christmas tree.

"Hairy fuzz!" The sheriff turned to his right to where Buster had gone. "Can you belive it, boss? Everyone of these peaches are covered with hairy fuzz!"

In the patrol car, he watched Buster walk stiffly home. Harry wasn't about to let him in the squad car. It smelled bad enough from the time Bu

ster had left a limburger sandwich in the car. Just what he needed, he thought, a medley of limburger, shit and piss. He pulled into the lot of the Chinese restaurant, he was hungry. He glanced up at the marquis above the entrance. Suddenly, he had no appetite. Tonight was not the night to eat at the Poo-Ping Chinese place.

He had sent Buster home to clean up and to meet him back at the park bench where their investigation had begun. They had some shrimp to capture. He pulled out his small telescope and began to scan the park. He nearly dropped it! "What in the 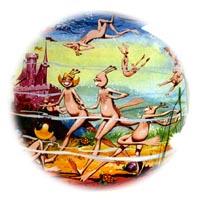 hell was that?" he said aloud. He trained the telescope to the same spot and tightened his grip on it. He couldn't believe his eyes. The reports were true! Seeing was believing! There were several of them frolicking in the park. Damned if they didn't look like big shrimp he noted. Their movements and size suggested that the creatures were more human than the witnesses had reported.

It was at that moment that he decided he would have to capture and arrest them on his own. If he called the State and asked for help, he would be the laughing stock of every law enforcement agency around. "Hey Sheriff Fuzz, got any more of them king-sized shrimp left?" He knew that before long there would be Forrest Gump jokes spread all over the Northeast.

"What the..?" His deputy appeared in the telescope. He was creeping up behind the Shrimp People from the shadow of some trees. "N

ice going, Buster. We have them surrounded now," he exalted. He headed in that direction, stopping every few yards to use the telescope. Then he noted some odd behavior from the creatures. Their heads were raised skyward. They appeared to be smelling the air. "Well I'll be damned," he said angrily. "He must have gone and shit his pants again!"

He became frantic, he could not see them anywhere. Even Buster was no where to be seen. He had closed to within twenty feet from where they had been. It was quiet, much to quiet. Even the crickets had ceased their chirping. He pulled back a branch to get a better look. He jumped back. There was one next to the tree holding some kind of electronic device, a weapon maybe? It turned and looked over his shoulder at him. It had bared its teeth causing Harry to jump. If he didn't know better, he'd have sworn it was grinning at him!

He realized it too late, but he was surrounded. They had formed a ring around him and were moving in cutting off an escape route. The one with the electronic device was the closest. It raised it, and was aiming it at him. The device was making a faint beeping sound. Harry would have prayed to his maker at that moment, had he not felt a grumbling in his stomach. He was about to shit himself.

Curmudgeon responsible for this post: Hale McKay at 12:47 AM

" it smelled like someone had crapped in a Christmas tree"

I almost peed my pants laughing. ;)

Peaches are supposed to have a little fuzz on them, you know. Peace fuzz? Have you ever heard of that? I found one in a drawer of my desk at my new work that had long haired peach fuzz on it! It was gross!