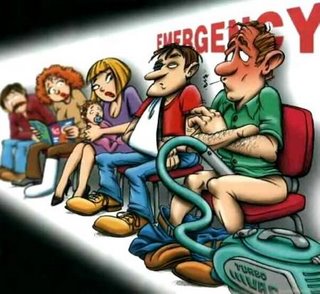 Last summer I fell on some concrete steps and broke a rib. If you have ever broken a rib, then you know it can be quite painful. Sometimes going to see the doctor can be more painful than the injury itself.
....My primary care doctor two days a week works at an out-patient clinic. So it was that I found myself in the waiting room of a clinic. It was a very perceptive person who chose to name them "waiting" rooms.
....First, there was a line just to get registered. Next you had to find a seat and wait to be called in for triage. Triage is just a fancy word they use to determine how long you have to wait during the next phase of the process. Since my condition fell somewhere between "life threatening" and a "boo-boo," I was ranked in the bottom third of the pecking order. In a word, I wasn't going anywhere anyway soon.
....To put things in the proper perspective, I had downed two cups of coffee and had smoked at least four cigarettes, including one in the clinic's parking lot, before entering the building. Those facts considered, I had to sit and watch the steady parade of the sick and wound 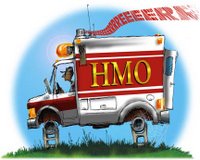 ed come and go. Several walked in on their own and then left on a gurney headed for area hospitals. Finally I reached the last phase before you actually get to go a room where you wait for the doctor to come see you. A nurse takes your vitals so she can send you back to the waiting room before you get sent to the room to await the doctor.
....Wouldn't you know it? My blood pressure was on the high side. Before I could say, "Don't put me on a gurney," they had one waiting. I protested and refused to be sent to Mass General. I explained that after five cigarettes, three cups of coffee and the anxiety of waiting three and a half hours with a broken rib would raise a cadaver's blood pressure. By the way, right after the triage session, I went straight outside and lit up a cigarette. That was followed by a cup of coffee from the vending machines in the lobby. (You know those vending machines don't you: the ones where the coffee pours just before the cup drops down.)
....At long last I was being examined by my doctor who astutely told me that it looked like I had a broken rib. No shit, I thought I'd been struck by a howitzer shell. Off to x-ray! When the technician looked at the product of my irradiation, he said, "It looks like a broken rib." Back with the doctor, he confirmed it, I had a broken rib! I was humbled in the presence of such great minds.
...."Okay," I said, "How about prescribing me some drugs so I can go home and suffer in the comfort of my Lazy Boy?" 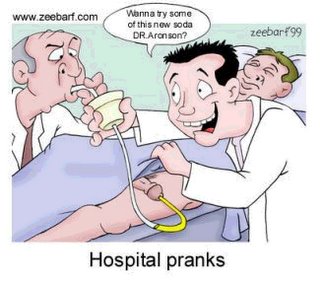 SURGICAL GLOVES
A surgeon was getting ready to perform a simple operation on an elderly lady. She had been administerd a local anesthetic. He noticed that she was a little nervous, so he began to tell her a story as he was putting on his surgical gloves...
...."Do you know how they make these rubber gloves?"
....She said, "No?"
...."Well," he spoofed, "down in Mexico they have this big building set up with a large tank of latex, and the workers are all picked according to hand size. Each individual walks up to the tank, dips their hands in, and then walk around for a bit while the latex sets up and dries right onto their hands! Then they peel off the gloves and throw them into the big 'Finished Goods Crate' and start the process all over again."
....And she didn't laugh a bit!!! Five minutes later, during the procedure, he had to stop because she burst out laughing.
....The old woman blushed and exclaimed, "I just suddenly thought about how they must make condoms!"
WHAT DOCTORS SAY / WHAT THEY'RE REALLY THINKING
* "This should be taken care of right away."
(I'd planned a trip to Hawaii next month but this is so easy and profitable that I want to fix it before it cures itself.)

* "Let me check your medical history."
(I want to see if you've paid your last bill before spending any more time with you.)

* "Why don't we make another appointment later in the week."
(I'm playing golf this afternoon, and this a waste of time or I need the bucks, so I'm charging you for another office visit.)

* "Let's see how it develops."
(Maybe in a few days it will grow into something that can be cured.)

* "Let me schedule you for some tests."
(I have a forty-percent interest in the lab.) 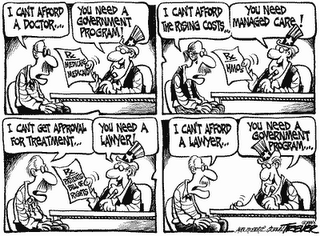 * "I'd like to have my associate look at you."
(He's going through a messy divorce and owes me a bundle.)

* "I'd like to prescribe a new drug."
(I'm writing a paper and would like to use you for a guinea pig.)

* "This may smart a little."
(Last week two patients bit off their tongues.)

* "This should fix you up."
(The drug company slipped me some big bucks to prescribe this stuff.)

* "Everything seems to be normal."
(Rats! I guess I can't buy that new beach condo after all.) 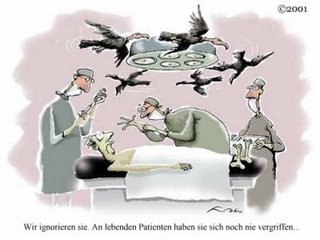 * "I'd like to run some more tests."
(I can't figure out what's wrong. Maybe the kid in the lab can solve this one.)

* "Do you suppose all this stress could be affecting your nerves?"
(You're crazier'n an outhouse rat. Now, if I can only find a shrink who'll split fees with me.)

* "There is a lot of that going around."
(My God, that's the third one this week. I'd better learn something about this.)

* "If those symptoms persist, call for an appointment."
(I've never heard of anything so disgusting. Thank God I'm off next week.)
No.694
Curmudgeon responsible for this post: Hale McKay at 10:50 PM

* "Let's see how it develops."
(Maybe in a few days it will grow into something that can be cured.)

I thought this was a photographers line Mike.

I work in a doctor's office and some of those were really hilarious (and most likely true).

Hee hee! Thanks for the funnies.

My husband found out a sure-fire way to cut waiting room time. Bleed on the carpet. They'll take you right back!

Very very funny!! The next time I hear my boss say one of those lines, I think I am going to die of laughter....another priceless post!! XOXO

So, you broke a rib, right?

Glad I didn't have any broken ribs, or I think I'd have cracked them again from laughing so hard! Those were great! Thanks for sharing!

But some day when you are REALLY sick, you will be sorry for this.

According to me, Dr. Hoss.

Viagra has been clinically shown to improve erectile function even in men who had diabetes or prostate surgery. The pill contains this component that helps increase blood flow to the penis and may help men with ED get and keep an erection satisfactory for sexual activity.

Propecia is a wonderful medicine for men suffering hair loss and who are at risk of getting completely or partially bold. Propecia can also help you at the beginning stages of some prostatic problems.