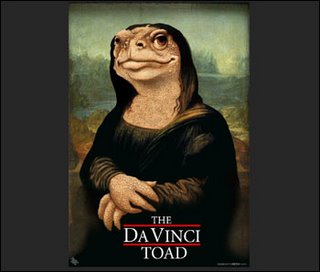 The book, the movie ... They've got it all wrong. You heard it here first!

Yes, Leonardo Da Vinci had in fact hidden a secret code in his paintings. It had nothing to do with the Holy Grail. The wench, Mary Magdalene played only a small part in his cipher. It was all about food.

Do you actually think they sat down at the head table and paid good pieces of silver for garlic bread and a cup of room temperature Kool-Aid? Of course not! It was their Last Supper before pulling up stakes on a long road trip.

With the boss picking up the tab, they went for Blue-Plate special items on the menu. Wouldn't you have done the same? Instead of Kool-Aid, they ordered their imbibations from the top shelf - two year-old Ripple. Mary Magdalene was the waitress assigned to their table.

They were a rowdy bunch whose reputation preceded them. Such was to be expected of the Mesopotamian championship soccer team. Between them they downed dozens of cups of the wine. The wine washed down plate after plate of the delicious appetizers that had made the Galilee Grill famous in the Roman controlled city. It was rumored that even the great Caesar had et tu plates in one sitting.

Mary finally got a chance to sit down for a breather after the soccer team left. They had tipped her well, but she didn't have a chance to count the gratuities. Another large group had entered and took up their places at the table that had been abandoned by the soccer players. It was an odd rag-tag group of disciples led by a handsome Rabbi. Despite the sign outside that forbid sandals, the proprietor had allowed them to enter. Mary assumed that they must have slipped him a few pieces of silver.

The rest of the story is history, as recorded in the Christian scriptures. Leonardo had been awarded a contract to paint the Last Supper. He had painted two different smaller versions for the church officials t 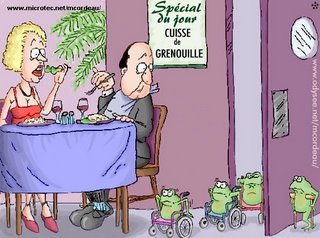 o choose from, and in both he slipped in his secret code.

While others were looking for possible ascendants of Jesus, speculating that Mary was the Holy Grail, and suggesting that some secret societies were protecting that code, I saw the obvious.

No, it was none of those. The Holy Grail was the menu from the famous Galilee Grill. On that menu is perhaps one of the greatest finds of all antiquity.

Da Vinci had hidden and preserved the original recipe for ... Frog Legs!

No.695
Curmudgeon responsible for this post: Hale McKay at 10:34 PM

"even the great Caesar had et tu plates in one sitting."

HOW do you manage to fit so many awful puns into one post?!

Can't wait to see the hits you get from Google with this one.

Love your sense of humor and way with words. It is a pleasure to make daily visits.

Thanks for sharing your rare wit.

You hopped right into that one Mike.