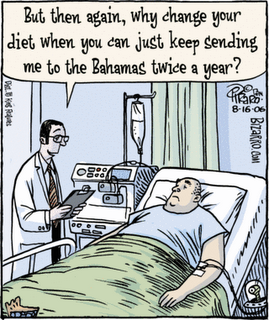 I think I've been in the Fitness Protection Program far too long. Man, am I ever out of shape! The coffee mug arm curls just aren't getting it done. I'm going to have to reconsider that brisk morning walk from the back porch to my truck. I have a regular regimen of Glad bag hauling, but what good is all that weight lifting doing me?

Oh, I've even tried jogging too. Every morning, I spend at least a half an hour trying to remember my schedule for the day. Sometimes I even increase the reps by trying to recall the previous day. It doesn't even work up a sweat.

Have you ever noticed the similarity between "exercise" and "exorcise?" They have the same amount of letters. They sound the same. Oddly, their definitions are practically the same. One is simply the product of the other. It's true!

Remember that scene from The Exorcist when the priest watched as Linda Blair's head was spinning around on her neck? There was no act of exorcism happening. It was exercism! You see, the priest was in reality her personal trainer. He was coaching her as she performed a head and neck exercise. Several reps of that routine exorcises stiff and sore muscles.

Today I had a new client, an elderly 73-year-old woman, on my schedule. Much to my chagrin, she lived on the third floor of an apartment building with no elevator. (As this is only the year 2006, there was no teleportation system either.) This meant that I had to traverse three flights of stairs. A workout empty-handed to be sure, but lugging a vacuum cleaner, a mop, and a bucket of cleaning supplies, it proved to be a daunting climb.

I have always been a firm believer of moderation. So I stopped at each half flight landing to preserve my energy. When I arrived at her door, I was sweating and panting. No wonder, I had just scaled the Matterhorn!

So it came to pass that we have reached the state of physical fitness and happiness in which we find ourselves today. You might say it is of Biblical proportions that we have survived at all.

As I hang my cap on the handle of the exercise/exorcise bike and neatly drape my jacket on the handles of the tread mill, I can see that I really should try to get myself in shape. An over-sized mug of coffee is good for a dozen arm curls with the left hand and

six glazed donuts should work for the right side.

Curmudgeon responsible for this post: Hale McKay at 12:12 AM

Interestingly, I'm very attentive to my diet during the summer, when I'm sitting around the house doing nothing. I guess I'm afraid of putting on thirty pounds in eight weeks.

But, now that I'm back to work, I've got a bag of Oreos and some suds next to me.

I read your post over at Kenju's site and I felt sorry for you having no comments due to blogger snafu's so "here I am" Clever exercise post.

Aw Mikey, we know you want to keep that girlish figure of yours. Man boobs are SOOOOOOOO attractive.

An oversized mug of coffee does not equate to 6 glazed donuts! You'll be unbalanced, Mike. Hold a dozen!

P.S. I tried to post this 3 times. At no time did the verification letter appear in the block (I got the dreaded red x). It finally came up for me. Bah, humbug!

It seems sometimes I have to use my Google ID and others my Blogger ID, but I have never had any other problems commenting.