No Blog Is An Island

Message In A Bottle
Have you ever found a bottle with a message in it? If not, you can find a lot of them if you know where to look. Not only can you find messages in bottles, but you can even send your own!
Check out this beach, where you can find virtual messages in bottles from all over the world. A beacon from a lighthouse will alert you that a floating bottle is nearby. When it reaches the beach, you click on the bottle to read the message it contains. You can even add your thoughts to the end of the message and "throw" the bottle back into the sea. The bottle will then float off on the sea until another person finds it. 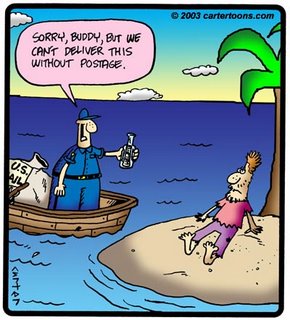 You can start your own message if you don't wish to add to an existing one. It may take a while before a bottle washes up on the beach. The site explains it as the "tidal conditions" of the Internet. I found it easier to leave the site open in the background and check it periodically. Sure enough, a bottle will be there waiting.

You can also "send" a message in a bottle to friends and family through your e-mail. The recipient's mail will include a hyper-link that will connect them to their own personal message.

A word of caution: This site can become addictive. (Just ask my wife and daughter, both of whom are hooked.)

A guy is stranded on a desert island, all alone for ten years. One day, he sees a speck on the horizon. He thinks to himself, "It's not a ship." The speck gets a little closer and he thinks, "It's not a boat." The speck gets even closer and he thinks, "It's not a raft."
....Then, out of the surf comes a gorgeous blonde woman, wearing a wet suit and scuba gear. She comes up to the guy and says, "How long has it been since you've had a cigarette?"
...."Ten years!", he says.
....She reaches over and unzips a waterproof pocket on her left sleeve and pulls out a pack of fresh cigarettes. He takes one, lights it, takes a long drag and says, "Man, oh man! Is that good!"
....Then she asks, "How long has it been since you've had a drink of whiskey?"
....He replies, "Ten years!"
....She reaches over, unzips the waterproof pocket on her right sleeve, pulls out a flask and gives it to him.
....He takes a long swig and says, "Wow, that's fantastic!"
....Then she starts unzipping this long zipper that runs down the front of her wet suit and she asks him, "And how long has it been since you've had some real fun?"
....And the man replies, "My God! Don't tell me that you've got golf clubs in there!" 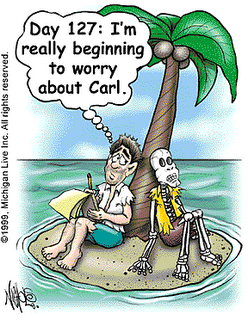 Boy on a Desert Island

A boy is marooned on a desert island, and survives for another 10 or 15 years, when one day a young woman shows up, also apparently marooned. She asks him, "So, what do you do around here?" He replies something like, "Oh, pick coconuts, do a little fishing, and dig for clams." She asks, "What about sex?" Since he was marooned as a little boy, he has no idea. "Sex? What's that?" So she proceeds to demonstrate. "So, what do you think?" she queries. "Well, it felt real good, but look what you did to my clamdigger!"

There was a cruise ship going through some rough waters that ended up sinking just off the coast of a small deserted island. There were only 3 survivors: 2 guys and a girl. They lived there for a couple of years doing what was natural for men and women. After several years of casual sex all the time, the girl felt really bad about what she had been doing. She felt having sex with both guys was so bad that she killed herself.
....It was very tragic, but the two guys managed to get through it and after a while nature once more took it's inevitable course. Well, a couple more years went by and the guys began to feel absolutely horrible about what they where doing.

Curmudgeon responsible for this post: Hale McKay at 8:45 PM

I never heard of that site before. I checked it out, but didn't write a message yet. I have to take my debut very seriously.:)

Yeah that's a sick joke that last one Mike.

It drives me nuts when you type in your background color. And when you don't have comments enabled. I really wanted to comment on you iPod getting stolen!