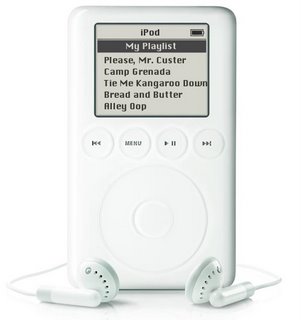 My brand new iPod was stolen! Can you believe it?

It took me forever to download some classic super hits. Now they are lost! There were other classics on there besides those shown in the image. There were: "Does Your Chewing Gum Lose It's Flavor"; "Mule Skinner Blues"; "Purple People Eater"; "Wolverton Mountain"; "Yummy,Yummy, Yummy"; "The Jolly Green Giant"; "Beep Beep"; and 22 others. I'll have to start over when I get a new iPod.

Of course that means I will have to find some other means to entertain myself in the meantime. I was going to read my e-mail, but by the time I had eliminated the spam there was no mail to read. 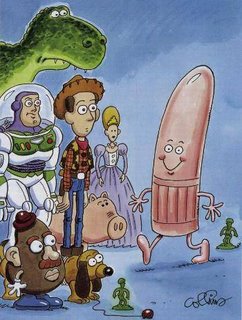 Then I remembered the new Director's Cut DVD of "The Toy Story." It is complete with deleted scenes that included another toy character. This character was left on the editing room floor when it was decided to make this movie a children's film. Trust me, this character steals the show.
....Imagine the look on your kids' eyes if they would have found a Dilly-Doe action figure in their Happy Meals!

After watching the movie, I found myself in need of something else to provide me with some entertainment. I quickly dismissed the book of Sudoku puzzles, as I find them them as boring as Word Searches. I suppose I could have cuddled with a good book like War and Peace, Ulysses, or The Unabridged Webster's Dictionary of the English Language , but I wanted something that would kill more than an hour. 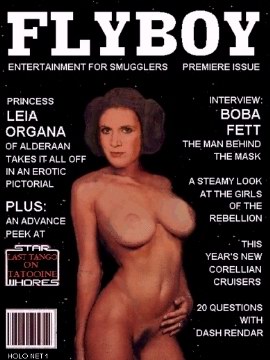 Ah yes. I had just received my first issue of Flyboy. Finally there is an adult magazine that mixes skin and Sci-Fi. It is done with taste.

What kind of man reads Flyboy? While there are some stunning pictorials, I'm the kind of man who actually reads the articles. (Really, it's true!) The centerfold of Princess Leia gives us a side of Luke Skywalker's sister that we never saw in the Star Wars™ trilogy. As I was reading the excellent stories, I was stunned by how she was wearing the hair on another part of her body.
...."Wookie Nookie" was a great article about Chewbacca on the subject of his species' mating rituals. The clothing she was wearing in the films gave no justice to Leia's body! When I finish reading all the articles, I just might go back and check out the pictures later.

What else could I do to entertain myself?

I suppose I could sit down and post a Blog for Sunday, 8/20/06. I wonder if I can think of something to write?

No.723
Curmudgeon responsible for this post: Hale McKay at 7:45 PM

I love the Dillie Doe...I didn't get that in my happy meal today..damn!!

I am sure there's an iPod theif out there somewhere laughing his ass off at your selection of tunes.

I happen to be addicted to Sudoku. That must be the accountant in me, I guess. Anyway, I'm sorry about your iPod. Maybe I'll get you a new one for your birthday and load it with some of my favorite songs.

Actually, I have never owned an iPod or have to any desire to own one.

Wow..they still have silicone in the future?

I suppose I could sit down and post a Blog for Sunday, 8/20/06. I wonder if I can think of something to write?

ha! the Toy Story thing is cracking me up!

Im not going to be able to ever watch toy story again with out thinking of....err...specialist toys.

Wookie Nookie? Sounds pretty scifi to me. Sorry about the ipod.

Love the new look! Much easier to read. Why did you disable comments on the latest post?

So now you're censoring our comments? Re-able the coments bucko. Please?