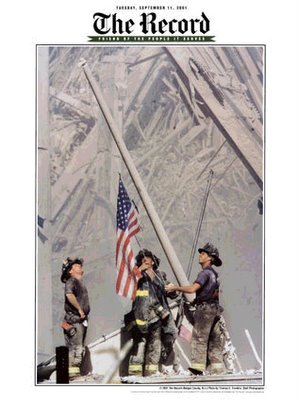 "Those who cannot remember the past are condemned to think "profiling" is worse than the slaughter of innocent people...." - (In memoriam, 9-11-2001; from the Millard Fillmore comic strip by Bruce Tinsley, 9-11-2006)

I lost no one for whom to offer a solemn requiem;
I wasn't there that day, but I was there with them.

I wasn't hurt, or knew any of the dead or those injured;
I'll never know the sorrow or pain some have endured.

But I knew what I was feeling about what I was seeing;
And I was thinking, "What kind of kind of human being,

What kind of coward could justify such an onslaught,
And praise their God for the evil they had wrought?"

No, I wasn't there that day. But America was under attack.
I wondered when, how soon it'd be that we'd strike back.


The poem above was scribbled down on a couple of napkins that afternoon following the attack on The World Trade Center. It was never finished. When I was preparing this post I thought that I should try to finish it.

In the end however, I decided to leave it as it was. It's like a "snapshot" of my thoughts on that terrible day. Besides, I don't think I could have recaptured the thoughts of confusion, fear and anger that tormented me five years ago today.

I was putting on my shoes, the finishing touches on getting dressed for work, when the news broke. I burned myself that morning. So frozen was I with the TV images that a cigarette burned down to the filter between my fingers. When the second plane struck, I thought it was the end of the world. Surely I had just seen the attack that would send us into World War Three!

Our country's naivete' has been shattered forever. Innocence and security will no longer be taken for granted. May we be ever vigilant that such a tragedy never happens again. May we never forget those who were taken from us so needlessly. May those left behind be remembered as well.

No.744
Curmudgeon responsible for this post: Hale McKay at 10:05 PM

I think your poem is awesome the way it is.

That is a beautiful poem and a lovely tribute to 9/11 - AMEN!

I'm glad you listened to your inner poet and left it as you wrote it.

The feelings are real and current.

To try to amend it in any way would only have detracted from it.

It might be interesting to write another five years later.

I'm not sure if we will learn whatever lessons we were to learn from that awful day.

Serve well, care about those you serve, and share the love in your heart.

Wonderful Tribute!
Thank you.
Bless you...

So well put. The veil was ripped away and if we as a country are stupid to replace it, we're doomed.

I agree with Miss Cellania...it's just exactly right how it is.

Hi Mike, that was a winner.