Send Him To The Gallows! 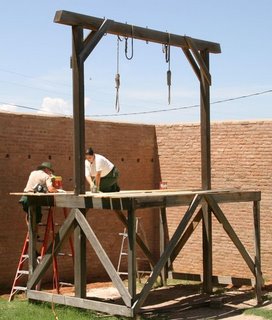 I don't consider myself to be an advocate for the death penalty. On the other hand, I cannot honestly say that I am opposed to it either. I'm afraid I'm guilty of a being a fence-sitter who sometimes opts to straddle the fence depending on the severity of the crime.
....I do believe, however, that the punishment should fit the crime. If someone commits a heinous crime, especially one of such magnitude as genocide, then the perpetrator should endure a slow and painful execution.
....Consider the punishment that has been doled out for some of the most nefarious evil-doers in history:

O.J. Simpson* was sentenced for life to spend his time on the golf courses of America to find those responsible for his wife's murder.

Bill Clinton* has been doing community service testing cigars to see if they can be used as viable marital devices.

Martha Stewart* served time as a highly sought after model for ankle bracelets.

The improper butchering of the English language landed Barbara Walters* on a program with a bevy of lame bitches.

For the crime of terrible acting on the program "Will & Grace," Megan Mullally* is being punished with a talk show.

So, I ask you, is there really such a thing as justice? Am I the only one who has ever noticed just how curious that word 'justice' is? If you break it down into its two syllabic components, you'll find "just" and "ice." You see, there is more justice in a tavern than there is in our courts.
...."What would you like in your whiskey, sir?"
...."Just ice, thank you."

How cruel a punishment is that Justin Timberlake* gets to serve a sentence wherein people think he has even a small measure of talent? Because of a typographical error on his birth certificate, Justin Timberfake is doomed to suffer the "Tom Arnold Syndrome." While Arnold parlayed a somewhat meager career on the skirt tails of an even less talented Rosanne Barr*, Timberfake will probably never be more than Mr. Diaz.

To use a favorite word of fellow Blogger scribe Monty , I digress.
....I am calling for harsher punishments than those meted out to the above criminals. For this latest atrocity, I want, no I demand the death penalty for a crime that can only be classified as mass murder. 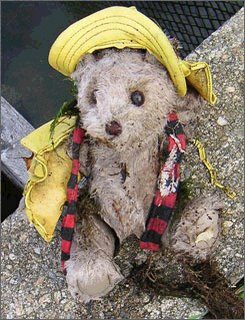 ....In Milford, New Hampshire, there is a state of shock and disbelief at the scene of what can only be called a gruesome killing field. The toll is expected to reach 2500 deaths - of trout, that is!
....A clogged drain for a pool at a Fish and Game Department hatchery blocked the flow of oxygen, suffocating the fish. One can only shudder at the thought of the suffering those poor souls had to endure as they were dying.
....State officials have in their custody the alleged diabolical killer. He has been identified as only a Teddy Bear wearing a yellow rain coat and hat. His name is being withheld pending further investigation.
....A person who wished to remain anonymous, said the bear looks like a Vermont Teddy Bear. Another spectator at the scene claims that the perp is none other than Paddington Bear.
....Investigators on the scene were attempting to determine why the bear would crawl into the drainage pipes with the expressed purpose of clogging the system and therefore sending the helpless fish to a watery death.
....The deaths prompted Hatcheries supervisor Robert Fawcett to state that "This is believed to be the first stuffed bear to cause fatalities at the facility." Fawcett was overseeing the placement of signs around the hatchery that read : "RELEASE OF ANY TEDDY BEARS NOT PERMITTED." He urged anyone whose bear ends up in a hatchery pool to find a worker to remove it. "They might save your teddy bear, and keep it from becoming a killer." Alas, it was too little too late of a warning this time.
....(Isn't it rather curious that a man who works with water and drains, would have a last name of 'Fawcett?' )

I cannot with clean conscience, show this dastardly bear even a hint of mercy. I say, "Hang Him High!"

*Some of you will no doubt disagree with my criminal assessment of the above celebrities. As stated in the disclaimer in this Blog's header - too bad! To me, any celebrity is fair game to some bashing. I suppose you can sue me if you like. However, if someone chooses to defend O.J., I reserve the right to sue you!

No.757
Curmudgeon responsible for this post: Hale McKay at 11:14 PM

Honestly, justice will have to wait til he's out of the Teddy Bear hospital. He looks a bit rough.

Hanging is too good for some Mike, the likes of that Beardon't deserve such a nice death!!!

actually I think WE are the ones being punished with Megan Mullaley's talk show. ;)