It's All About Meme

Back on 10/12, Christina tagged me with the following meme. She had been tagged by her dad, John, aka Duke of Earl. (Nice end-around there, John.)
....I'm not really a big fan of memes, especially as a victim participant. Having said that, I do enjoy reading how others respond to them.
....This one, however, intrigued me enough to at least consider it. This meme requires one to answer nine questions about reading books. The tenth item, was of course, the obligatory request to tag five others. (You don't have to hold your collective breaths, I'm not going to tag anyone.) I suppose I could have tagged Peter, but [sic] he participates in these things way too often.
....If on the other hand, you do wish to try this meme, (or already have) I'd like to read your responses. (Wink-wink!)

1) One book that changed your life: ( Right out the gate, this meme goes for the jugular!) This is a real tough one, let me tell you. There are a lot of books that have had an impact on my life, so it would be difficult to single out just one. 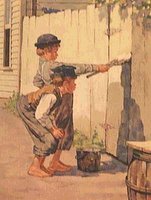 ....So I won't. Instead, I'll single out the author as well as his books. The picture at the right is a clue. Both The Adventures of Tom Sawyer and The Adventures of Huckleberry Finn by Samuel Langhorne Clemens (Mark Twain) made impressions on me in my youth. Probably because I spent a lot of time on the banks of rivers, I could relate to those two characters.
....Moreover, it was the author himself that had the biggest impact on me. From the first time I read those books, I've had an affinity for humor and satire. I owe my fascination with science fiction, especially when it deals with time travel, to probably one of my most favorite books of all time, A Connecticut Yankee In King Arthur's Court.

2) One book you'd read more than once: I'm gonna cheat here. (Lazy?) Pick any one of the three cited in 1). I can't think of any book that I haven't yet read, that I'd want to read again. (Ha! Ha!)The last book that I read a second time was Cyborg by Martin Caidin. For those who don't know, it was from this book that the TV program "The Six-Million Dollar Man" was adapted.

-----"Lists of books we reread and books we can't finish tell more about us than about the relative worth of the books themselves. - Russell Banks

3) One book you wish you'd never written: This one, as it is stated, is easy. Since I haven't written a book, I haven't had one to regret writing. In all fairness, I'll change it to "One book I wish I'd never read." This one is a no-brainer; hands down it would have to be Finnegans Wake by James Joyce. I've never been able to determine if this book was a tangled web of nonsense and gibberish with no plot or content, or if it is the only book that has ever come close to being or describing just what a dream is. No single book I've ever read before or since has ever messed up my head like this one.

4) One book that made you laugh: Trying to answer this one, I'll be doing injustice to some books I cannot think of at the moment, but any title will suffice I suppose. I'll have to go with I Really Didn't Say Everything I Said by Yogi Berra. You gotta love this man's witticisms.

5) One book that made you cry: I'll admit that I cried at the ending of the movie "Old Yeller," but I never read that book. (Was there such a book?) As a rule, I don't read the kind of books that might make a person cry. I would have to go with one that maybe brought a tear to my eye, but I know it saddened me. That would be the first of Joy Addams' trilogy, Born Free.

6) One book you wish you'd written: If I were to ever write that elusive so-called "great American novel," I would want it to be an allegory. The greatest allegorical book of all time, bar none, is Gulliver's Travels by Jonathan Swift.

7) One book you'd want on a desert island: This choice will explain why I switched the order of numbers 3 and 7. I figure that if I were stranded on a desert island, I'd probably have little to do and one hell of a lot of time on my hands. Chances are that I'd probably go out of my mind being alone too. Here's where Finnegans Wake would ever get a chance for me to ever try to read it again. If I'm going to be alone and going nuts, let me try to figure out WTF Joyce was trying to say in a setting that would justify my madness.

8) One book you're currently reading: As a gift I recently received

The More Than Complete Hictchhiker's Guide by Douglas Adams. This book contains "all four" books of his funny and famous trilogy. (Now when I finish reading this, then all four of them would be the response to number 2.)

9)One book you're meaning to read: Once again my response is going to reference a trilogy. I saw the movies and I loved them, but I am a bit ashamed to say that I have never read J.R.R. Tolkien's Lord Of The Rings, or the other two parts of the series. While I am partial to Science Fiction, I never really cared for its cousin Fantasty. However, since I have seen and very much enjoyed the movie adaptations, it's about time I got around to reading the books.

10)Tag 5 others: As I stated above, I'm not going to tag anyone. I will, however, offer an alternative to number 9.
....Let's call it "One blog post you've been meaning to read."

I have written another short story, this one with a Halloween theme. It is in three parts. The first installment of Helloween was posted on 10/17 with my post number 774. Part two will be posted on Tuesday 10/24. The concluding third installment will appear appropriately enough on Halloween night, 10/31.
....To get yourself up to date on the story, if you aren't already, you can either scroll down to the posting or click here to read the first installment.
....(No one should be surprised by now at my proclivity to shameless self-promotion, but I want more people to read my attempts at original fiction.)

Curmudgeon responsible for this post: Hale McKay at 8:30 PM

You visited me. But the comment I got did not go to the current comments..... Or it is somewhere hidden in the old posts. I like playing detective so I came over. I will give you one clue that will add to the Meme and will keep you searching for a long time. The book that has most influenced me is "Born of Heather" by Aulte Lund. :) I really appreciate you visiting

Hi Mike, it was very good of you to offer me another chance to participate in Christina's book meme, having read your answers only convinces me that I made the right choice when I "passed" on the original offer.

Good job! Looks like we bothed memed on the same day. Does that mean we're related now?

OUTSTANDING! Is it because we are close to the same age that Twain had such an influence on us? And though I haven't read "A Connecticut Yankee" in decades, I still laugh out loud when I remember some of its passages. Come to think of it, THAT's a book I think I'll re-read soon and see if it still holds that Twain magic. Bet it does! Great answers! (But I thought the original number 7, your number 3, was asking what book you wish HAD never been written, not that YOU'D never written. Whatever.)

Hi Mike, thanks for playing. I don't really care for trying to answer these memes, but really like to see what other people said. I had forgotten about Mark Twain, but now that you mention him - good choice! With your crazy sense of humor (satire) Twain and Swift were great choices for you.

I think my dad's right - the one question was what you wish had never been written (by anyone). But that's a difficult question because even though i hated something it may be a source of inspiration for someone else. So it's not really fair to wish any book did not exist. If I had to answer, I would probably say "The Fountainhead" by Ayn Rand - hated it!!!!!!!!

John and Christina - you both bagged me. I did copy that question down wrong. But in the end the book I wish had never been written still would yield Finnegans Wake.

Just so you know, if you read "Old Yeller", you will cry at the end as well.

There are also two sequels..."Savage Sam" and "Little Arliss".

Hi, how are you? Have not been around here for a while!!!! I have not read any books in ages, so I will take part in your post lol - I just don't get the time to read although I do love reading! Maybe when my kids are older and I have more time to myself!

I decided to make my response in the form of a posting on my new blog site.

You, Peter and Margaret were an inspiration for me to do so.

Lord of the Rings ..awesome!! That's all I can say...great choices..I hate meme's too!