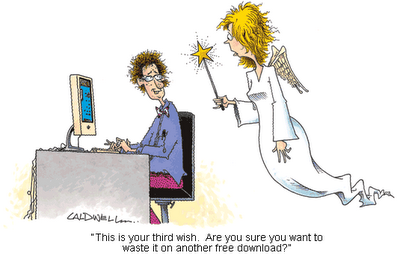 Hortense stood outside a door of the Fairy Tribunal on the day of her annual perform-ance review.
....A recent apprentice Fairy Godmother, it hadn't been a very good month for her. It seemed that no matter how hard she'd tried, something would go wrong. She was certain that she would surely lose her wand and maybe even her wings this time around.
....From behind the door she heard a voice say, "Is that Hortense waiting out there?"
...."Not really, Mother," replied her assistant. "She appears to be calm."
....Exasperated the God Mother exclaimed, "What did you say? Oh, never mind. Send her in, please."
....Standing before the dais, Hortense bowed to the matriarch of the Fairy Sisterhood.
...."Tsk-tsk," said the Fairy Godmother Superior, "You seem to be having trouble grasping the concept of a being a Fairy Godmother, my dear. Granting wishes carries a certain amount of responsibility."
....Observing the prescribed protocol of the Tribunal, Hortense nodded and did not speak. She listened intently as the matronly fairy read from the report of Hortense's assignments. She cringed when she heard the name Bill Gates, the bespectacled nerd she had granted three wishes.
...."The kid tricked you, that much is certain, but a good Fairy Godmother must see through chicanery. You should have been suspicious when he used all three of his wishes for free downloads. If they were free in the first place, then you should have denied him those wishes. Unknown to you he was downloading the programs of his rival programmers."
....Hortense sighed in defeat. The rest was history. The kid went on to found Microsoft and in turn created a monopoly of biblical proportions. She raised her wand, certain that the Godmother Superior would be demanding it.
....Instead she waved off the tendered wand. "I have a special assignment for, Hortense. It is an easy case, but no less an important one. I trust that even you cannot fail at this endeavor."

Meanwhile in merry old England, Prince Charles had just left the home of his mother, the Queen. Once again he had failed to convince her that the picture of his wife, Camilla, should not be used as a dart board in the Queen's reception hall.
....Angrily he jumped into his car and burned rubber away from the house. Suddenly just before he had reached the main gate he felt a sickening thump. Fearing the worst, he stopped to see what he had run over. As if he wasn't in hot water with her in the first place, he had just run over his mother's beloved prized poodle.
....He was pacing back and forth frantically thinking. "Should I run? Or should I fess up to my mother?" He was startled by a sudden puff of smoke. There before him, floating about one meter above the ground, a woman had materialized from nowhere."
...."Fear not, sir," she said to him. "I am your Fairy Godmother. I was sent to help you."
....Gathering his senses, Charles said, "Why, yes. I do so need your help." He pointed to the bloody lifeless corpse of the dog. "Do you suppose you can bring the Queen's favorite dog back to life?"
....Hortense studied the mangled remains of the dog and sadly shook her head. "I'm afraid the dog is beyond my powers to resurrect, sir." She saw the disappointment etched on his face. "Perhaps there is another wish I can grant you?"
....Thinking for a few minutes, Charles removed his wallet from his pocket. He produced a pair of photographs and held them before her. "The picture on the right is that of Diana, my first wife. She was loved by everyone, including my mother. Sadly, she died in an automobile accident some time ago. Isn't she beautiful?"
...."Yes. She was a very beautiful woman," Hortense replied.
...."The other photograph," Charles added, "Is of my current wife Camilla, the Duchess of Cornwall. You see, no one likes her, not even my mother."
...."That's unfortunate, sir. But how do those photographs address my offer to help you?"
...."Do you suppose you could make Camilla as beautiful as Diana?" Charles asked.
....Hortense studied the pictures intently for several minutes before handing them back to him.
....She turned and said, "Let me have another look at the dog!"

Looking onto the screen of her magic power notebook, the Fairy Godmother Superior had been watching the whole drama unfold. She turned to her assistant and said, "She done good! She has passed the test."

No.812
Curmudgeon responsible for this post: Hale McKay at 12:50 AM

Some tasks are beyond the powers of a fairy Godmother Mike.

I hope you had a wonderful weekend. I wanted to say hello to everyone on my blogroll, and wish them well, because this was Thanksgiving weekend, and I am grateful for my Internet friends!

You hit pay dirt with this one. Great post. If I did humor, I'd have to steal it. But, I'll leave that to the pros.

If I were given just one wish that's all I'd need--I'd wish that I'd never run out of wishes.