One would think that being conceived on Christmas Eve would make for one special child. How curious would it be if that same child would be born on Halloween? Could it be anymore curious if he were to learn that his biological father was Santa Claus?
....What mysterious astronomical syzygy appeared in the heavens on that night dominated by a bright full winter moon? Could anyone have foreseen this as the coming of the Anti-Claus?

Thirty years ago three wise guys from the East End of the North End wandered the streets of Boston. They silently observed the pilgrimage of the costumed youngsters as they paraded from door to door seeking treats from the residents of each home. It was not the pagentry of Halloween that had lured them out into a chilly night.
....Dominick, Luigi and Valentino were not interested in the activities of the children that night. The source of their fixation was the curious star that had been observed moving across the clear night sky. To a man, they were well aware of the prophesy that had foretold of a special birth.
....If they had been visited by choirs of angels heralding the news, none were talking. Though they were bound by a code of silence, they were not hesitant to follow that star. Bearing violin cases containing tommy guns, Uzis and pistols with silencers, their gift was an offering of protection to the new born child.
....It was later, while behind bars, that they would learn that the star they had been following had in fact been an FBI helicopter that been tracking their movements. They had taken solace however, that on that night a new Don had been born.

The Wise Guys never knew what had become of their pseudo-Messiah. He was born that night even as they had been led away in handcuffs. The babe lay in a crib in the finest of silk swaddling. There was no heavenly host singing. There were no shepherds. There was no little Drummer Boy. It was Halloween night and any stables that may have had vacancy that night, were filled with jack-o-lanterns.
....The infant had entered the world a month late, fighting gallantly to remain in the comfort of his mother's womb. Was it fate or just dumb luck that the Kringles had chosen to name their son Klaus? Had the child just grown tired of crying, or had he been soothed by Bobby "Boris" Picket's The Monster Mash playing on the radio near his crib?
....Klaus grew up as a healthy normal, albeit nondescript, young boy. He had a few friends, hated girls, and looked forward to Christmas just as any normal six-year-old boy would. His destiny awaited him however, on the eve of his sixth Christmas.

It was Christmas Eve and Klaus couldn't sleep that night. He was too excited just thinking about the treasures that Santa would soon be depositing under the Christmas tree downstairs.
....Then he heard what he thought were voices. He was certain one was his mother's voice, but the other he couldn't recognize. It didn't sound like his father. He crept to the top of the stairs and listened.
...."Santa, we'd better be careful," his mother was saying. "Remember what happened on Christmas Eve six years ago?" He strained to hear Santa's reply, but only heard strange guttural sounds.
...."Careful big boy, you want me to conceive another baby on the night before Christmas?" She began to giggle, "Ooh. You always know the right buttons to push. Lower, darling. Lower." 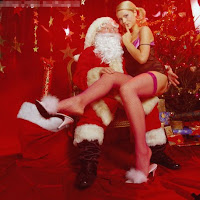 ....Klaus dared to peek around the corner and down the stairs. He turned pale and pulled himself back away from the scene on floor by the the tree. He might have been only six years old, but he'd had a fair idea what sex was.
....He returned to his bed and pulling the blankets over his head he began to weep uncontrollably. Emotions and thoughts ran rampant in his thoughts that night. His father, wasn't his father at all! He, Klaus Kringle, was the bastard son of Santa Claus! That bitch of a mother of his was nothing but a whore!
....Then that damned stupid Christmas song began pounding over and over in his brain. There was something wrong with the words. The song was different ....

Every Christmas season from that night since, he could only hear the song with different words than the original.

Traumatized by the sights and sounds of that night, the relationship between Klaus and his mother was strained. No matter how hard she grilled him, he would never reveal what had been troubling him.
....He grew more bitter as the years passed. The bitch that had raised him was a whore! He was the bastard son of that miserable old man, Santa Claus. He often wondered just how many other bastards he had made all over the world.
....He also distanced himself from his "father." Although the man didn't know that he wasn't Klaus' father, the boy could only feel resentment for him for not being there that night. Then one day, the man just walked away, leaving him and his mother to fend for themselves. Klaus surmised that his mother must have finally told him the truth.
....In time he became torn because of the psychological connection between his birthday on Halloween and his conception on Christmas Eve. The two dates were to drive the angst within him throughout his adulthood.
....Soon, Santa Claus and the world would learn of him.

(Don't miss the conclusion in the next post in a sequel that could only be called : "New Santa On the Block!" )

No.836
Curmudgeon responsible for this post: Hale McKay at 12:10 AM

Why thank you, Ivy. Be sure to tune in tomorrow for the exciting conclusion.

You do have a way with words.

I can hardly wait for the next iinstallment, AKA, conclusion.

Hi Hale, it's Gareth here from NMOTB's blog. I tagged you on a post. If you have already done that tag just tell me and I'll erase your memory so you believe you didn't already do it :P