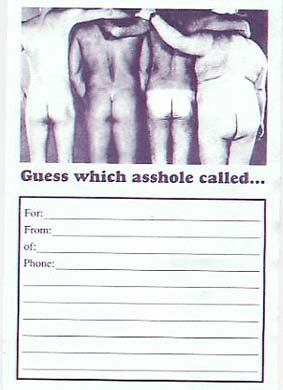 How did we survive before cell phones?

Today I left the house for work but forgot my cell phone! While I didn't mind not receiving any calls, I did reach for the missing phone several times to place some calls.
....I won't say I was frantic, but the blasted thing has become such an integral part of me and of my typical daily routines. To say the least, as the day went on, I found myself feeling stressed and distracted.

I was one the last holdouts to finally get a cell phone. I never felt they were practical. I never needed one before. Why I should I suddenly become dependent on one? Besides, I was reachable. I had a pager.

When my day's work was finally done, it somehow felt much longer than only eight hours. On the way home, there was an involuntary reflex on my part to reach for the phone. I needed to call home to see if I should pick up some milk or a loaf of bread. Alas, no phone.
....I had just stepped through the door when I was greeted by my wife, "Didn't you get the milk and bread?"

Thus, I had to act out the scenario that answers the question of the opening line. I had to go back out to get milk and a loaf of bread.

Inasmuch, the real question isn't how did we survive before cell phones, but rather, how can we survive now without them ?

If you'll excuse me, I have 10 voice mail messages I have to check.

Remember those little blue characters that lived in those mushroom houses? If you're in your thirties, you must have watched The Smurfs cartoons on Saturday mornings.
....Did you ever wonder ..."Hmm, all those males and only one female?" Smurfette could have named her price and been one rich and successful girl if she so chose.
....I wanted to get the skinny on Ms Smurfette. What was the attraction anyway? After all she would never to be able to get a job at Hooters, if you get my drift. I'll bet she wasn't even a real blonde!
....I don't know if they are still on television or not, but I thought I'd look up one those little guys. I thought a little tete-a-tete might clear up a few things. Did he ever smurf her? Did she give good smurf?

Well, I finally found one of the little fellows! Where else, but at Hooters. Unfortunately he was too busy to chat. So, I thought I'd belly up to the bar, er bra.
....Wouldn't you know it? That selfish little blue bastard wouldn't share!
....I said, "There's plenty to go around."
....He came up for air and replied, "I'm saving it for a friend. He'll be here soon. Go find your own!"
....Well, suffice it to say, I've been thrown out of worse places!

As I walked away, I did have an interesting thought. If the Smurfs are running around crawling into women's bodices, you don't suppose Smurfette is out there somewhere crawling up mens' pants legs?
....Just wondering.

No.874
Curmudgeon responsible for this post: Hale McKay at 12:09 AM

Smurfette wasn't a real blonde!! I assure you, I can see her roots =P

LMAO @ Naming her price, I don't think I can look at the Smurfs the same now!!

I think there was a grandma smurf at one point, but I could be wrong. It's been known to happen once a decade, and this might be it.

I could probably get along fine without my cell phone, since no one calls anyway, and I can't remember the hone numbers I want to use away from home. Except for the pizza place!

We usually have our cell phone turned off. It is for our convenience and is a less expensive way to make long distance calls. We also do not give out the number.

I just ran across an interesting blog posting by David Brin concerning cell phones. You all might find it of interest.

As for MS. Smurfette, I know nothing, and if I did I would keep it a secret.

I did warn the kids that watching the Smurfs too much might turn them blue. Can you believe that they didn't believe me?

Actually it was Papa Smurf, not a Grandma. All the other smurfs wore white pants and hats and Papa Smurf wore red. Smurfette was the only female. And remember that guy with the cat that would always try to catch them?

OK, i watched waaaaaaaayyyyyyy too many cartoons on Saturday morning when I was a kid!

Yes, Christine. The guys name was Gargamel. I forget the name of his cat. Yes, I watched them too, but with my daughter who was about 5 or six at the time.

It appears that the smurf has more than he can handle. He should have shared.

I love it! And I love this video! Check it out! Gargamel finally wins and exacts his revenge on the Smurfs!