The State of Your Union

I found it interesting that President Bush didn't utter the actual words "State of the Union," until he end of his speech last night. Perhaps that fact spoke volumes in and of itself. In a guarded manner, he may have acquiesced that the country isn't in such great shape. Yet, through it all, there remained that stubborn arrogance that his plan was still the best plan.
....(The two-faces of Dubya is displayed in the morphing picture at the right. This pic was "harvested" from Hoss.)

As a rule, I usually avoid matters politic. However, working with the elderly, a very valuable resource I have tapped into on several occasions, I am often privvy to their views on such matters.
....Today was no exception. When I walked into the main lobby of the senior housing building, a discussion was already in progress regarding the speech. There were the usual suspects, a group of men and women who all lived on the East wing of the building, espousing their interpretations of Bush's words. I have a private epithet for that particular group, the Eastern Bloc.
....This was not my first interaction with this bunch. The last time was documented in this post. On that day I had ruffled the feathers of one lady who believed in prestidigitation, you know, the belief that every event in your life has been written down in God's "daily planner." It seems that she wasn't happy to be corrected when I suggested that the correct word was predestination."
....I will admit that I did rub a little salt in her wounded pride that day, much to the delight of the others present.

....From the glare in her eye this day, she remembered me all too well. She addressed me, "What did you think of the President's speech last night?"
....I don't know if she was setting me up or not, but I decided to fire the first shot, "He gave a speech last night?"
....The poor old gal was crushed. She was expecting me to parry with her. She probably had a speech of her own prepared for this confrontation. She was the sole Bush supporter in the group, and all she wanted was a chance to defend him. Well, I thought that even though she had baited the line, I wasn't going to nibble. Hell, I decided to grab the bait, hook, line and sinker and run with it! (Little did she know, the fish was on the other end of the line!)
...."Sonny, you're telling me you didn't watch his State of the Union speech?"

Those little characters, the Devil and the Angel, had appeared and were hovering above each of my shoulders. One poke with that trident, the Angel was gone in a poof of smoke.
...."Look, I don't care about the state of his union. What he and Laura do in the bedroom is none of my concern," the Devil made me say.
....While the others began to laugh, a look of shock was on her face. She was speechless for several moments. Then Agnes elbowed her husband seated next to her and said, "The state of our unions haven't been too good, have they Harold?" Harold blushed and shifted a bit in his seat but said nothing. She looked up at everyone and said, "The last time the damned fool fell asleep while he was on top of me. How's that for a sad state of a union?" 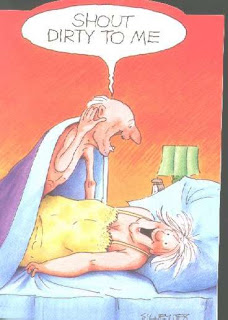 To Harold's embarrassment and the Bush-lady's chagrin, a chorus of laughs rang out. The audience had grown with the arrival of four more residents. Apparently the word had spread that the discussion of the President's speech in the lobby had turned into a comedy routine.
....It wasn't my plan for my remarks to venture into the privacy of these seniors' conjugal secrets. I figured it was a perfect moment to shift gears and change the topic to one I had planned originally. You see, I was anticipating this confrontation ever since our last bout.

I spoke up and directed my remark to my 'sparring partner,' who was seething by then. "All I can say is that Bush will go down as a better President than the next one!"
....My words must have intrigued her. She asked, "Next President? And who will that be?"
....I didn't bat an eye, "Hillary Clinton!"
....I swear I didn't think the lady could move so fast. She bolted upright and steadied herself on her walker and then shook her fist. "That bitch? The next President? Ha! She couldn't keep that whore monger husband of hers in line! What makes you think she can run the country?"
....Like I said, I was prepared for that meeting. "Well, for one thing she'll be good for the economy. The employment figures will rise."
....She was fit to be tied. "She wanted to take away our health plans! How in the world can you believe she'll help the economy?"
...."Just think," I said and I purposely paused for dramatic effect, "Just think of all the comedy writers, and stand up comedians, and cartoonists, especially editorial cartoonists that will find truckloads of material every day if she were the President. Oh, and don't forget the ... First Gentleman, Bill."
....There, I had done it. I had knocked down the hornets nest. That little Devil, however, was poking me to keep at it. "I know the perfect Vice President who could run with her. What do think of Rosie O'Donnell? She could be the female Dick Cheney. He shoots guns. She shoots off her mouth."

As she guided her walker away toward the elevators she was shaking her head and mumbling something unintelligible. As was the case at our last battle of wits, I stood as the victor and received the accolades of the still laughing seniors who remained.
....Something tells me that in the next meeting on the battlefield, she will be armed to kill. I will have to stay on my toes and be ready for anything.

I am reminded of a relevant joke:

"A man finds an old lamp partially buried in the sand on a beach. When he rubs the sand from it there is a sudden puff of smoke. Before him, hovering in the smoke was a genie who showed his gratitude for being released by granting the man three wishes.
....The man thought for a moment and asked if he could combine the three wishes into one wish with three parts. While it was an usual request, the genie agreed.
....The man said, "I want to spend the weekend in a luxurious hotel suite and sleep with three famous women who will do everything I ask."
...."It is done," said the genie.
....Before he could blink an eye he was standing in a posh hotel suite. There lying naked on the bed were the three famous women the genie had provided. There were Elizabeth Taylor, Lorena Bobbet and Hillary Clinton. He shrugged thinking they weren't who he would have chosen, but he decided to make the best of it.
....On the last hour of the weekend he awakened to not only find himself alone, but he had lost his house, his penis had been cut off, and he no longer had a health plan.

So, my friends, what is the State of Your Union?

No.875
Curmudgeon responsible for this post: Hale McKay at 12:14 AM

Jousting with senior members of the eastern bloc may be wrought with danger Mike, they are masters of the dirty tricks regime.

Wow, do people really still believe that Hillary was trying to TAKE AWAY their health plans by covering ALL Americans with universal health care?

I guess those insurance company PAC TV spots did their trick.

Miss C., I'm afraid that a great deal of our senior citizens think this of Hillary Clinton.

Oops Me made mess and had to clean it up. *smirk*

Good Read Hale. Gave me the giggles and Me especially liked the way you balanced yer angel and devil. Me tends to just let the evil one run amok and listen to the recriminations afterwards.
Keep em coming, friend!

The state of my union is cold. But warmth is on the way. nice post.

You sure do know how to keep some folk's blood pressure up, don't you?

It was funny, though.

You better watch out though, I do believe the Bush lady could ambush you when you least expect it.

As for the state of my union there is some information about it somewhere in this posting.

I usually avoid politics, but this was frickin' hysterical! LMAO!

Just watch your back, the Bush lady could be waiting in ambush somewhere you least expect.