My Nape Neck of the Woods 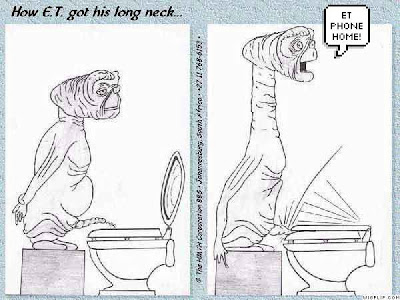 A while back Peter, he of Holtie's House fame, posted of a blog surfing adventure he had taken.
....I had taken similiar treks in the past. The result of those tours can be found in my Blogroll under the titles of "he said," "she said," and "they said."
....Peter took it one step further and posted the results of his excursion into the blogosphere, which can be found here.
....The idea is to start on your own blog page and then click on the "next blog" link above your site's header. You then click on a blogroll link on that site. You keep repeating the process until you find a site that has your site linked. Peter's post was titled "10 Degrees of Separation," because it only took him 10 sites to find his way back to his own page.
....Actually he did land on other sites, but they weren't counted as they were either in foreign languages, were instructional or sales sites, or they had no blogroll. Those sites were just skipped. Peter provided the URLs to the ten that made up his route.

With a fresh cold drink close at hand and some munchies nearby, I nested in front of the computer today and set out on my own "Blog Trek."
....(1): The first site I landed on was a Russian site. I was about to skip it when I realized that it was a tribute to the American Pinup. For fun, I lifted the neon pic to your left, then I skipped it. (I forgot to grab the URL.)
....(2-5): Next, I landed on four foreign language posts in succession, all with those little squares for text. They were unceremoniously skipped.
....(6): Then I hit this site for BBQ Crock Pot Recipes. If you're looking for something different for your next meal, this site might be of interest to you. (No blogroll.)
....(6): This site had no blogroll either, but I thought it rated a mention. I found the title, not only its content, but its spelling of interest: "Understannding Body Language of your Girl Friend." If the author "understannds" body language as well as he understannds spelling and Spell Checker, then I have my doubts he understannds very little about women.
....(7): A Subaru owner with no blogroll.
....(8): A site that provided links to sites that sell male enhancement products. (No bloggroll.)
....(9): A site of a 25-year-old single mother who writes like a 12-year-old. This young lady should be more guarded about what she posts, lest DSS stumbles across it. In her profile she states that she likes "muthering" and "crowshaying." I think she may be related or perhaps the girl friend of the dude in item number 6. I chose not to copy her URL and she had no blogroll.
....(10-18): A series of computer ads, political blogs and foreign sites. The "Next Blog" button was getting much more a workout than blogroll links.
....(19): A site where you can actually bet on who is going to get kicked off the various Reality Programs. People will bet on anything won't they. I ignored the URL - I didn't want to contribute to any possible addicted gamblers out there.
....(20): Finally!! On my 20th site I landed on one I recognized. I had been here before: Wordless Wednesday. I had visited this site by way of someone's blog that I was certain may be on my own blogroll.
....(21): I rubbed my hands together and began scrolling down a rather large blogroll. I was getting anxious by the time I reached the letter "I's." Aha! Excuse me, Raggedy while I pass through. I just need to click on the link to my site. I'll be back soon!
....(22): Home! It took me 22 site links and an uncounted amount of skips and about two and a half hours to complete the trip.

No.898
Curmudgeon responsible for this post: Hale McKay at 11:26 PM

Oh that is pretty cool. Though I would have been interested in seeing the 25 y r old single mother's site....just for a laugh...lol I would try this, but I htink it would take me a day to find my way back to my own site...lol

I think I may have to give that a go! I can't imagine I'd land on someone linked to me anytime soon, however. But sounds like a good "after surgery" project next week while I'm sittin' around.

OK, it's now on my next week's "to do" list. Actually it's the only thing listed, hahahaa!

"male inhancement" products. It always cracks me up of how the advertising industry sugar coats uncomfortable subjects, "over-active bladder" etc.

Good work Mike, I think I may have made mention of the fact that it took more tries to find a launching site than complete the rest, seems things haven't changed.

Ya know, I expected this to take forever, and was looking to put off doing some homework. I found my way back to mine in four clicks. I was shocked. Now I have to go do some damn homework. THANKS ALOT, Mikey.