I Want One of Those !

A 2006 study found that the average American walks about 900 miles a year.

Another study found that Americans drink an average of 22 gallons of beer a year.

That means, on average, Americans get about 41 miles per gallon. Not too bad.
(thanks Earl)

You'd have thought Detroit would have taken notice by now! Of course, manufacturing automobiles and trucks that run on beer and other alcoholic products, would be fraught with some problems.

Picture a Redneck with an empty fuel tank in his old pickup truck and one 16-ounce bottle of Pabst Blue Ribbon left in the fridge. Talk about a dilemma, this would be a classic example of a Catch-22 situation if ever there was one. Does he pour the beer into the tank so that he can drive to the nearest beer store to buy some more Pabst? Or does he drink the beer so he can make an intelligent decision about what to do about the empty fuel tank?

(Not to be overlooked is the serious consideration whether Pabst beer should be wasted for such a frivolous purpose as filling a fuel tank.)

As he swigs down the last drop from the bottle of beer, he has an epiphany! He grabs a roll of hose from the shed and commences to trek three miles through the hills to his neighbor's place. (Mind you, the beer store is only a quarter of a mile in the other direction from his own place.)

He runs the hose into the tank of his neighbor's Corvair and begins to siphon off some of the precious liquid. Damned if he didn't forget to bring a container of some kind into which to drain the amber liquid! It seems he has only one place the stuff can be directed - into his thirsty mouth!

Not to worry! He gets a good buzz and wakes up the next afternoon. Hangover and all, he has another epiphany. He has to take one helluva squirt. The outhouse is occupied and he has an empty tank!

Sure the engine was a wheezin' and a coughin', but he finally got down to the beer store. About halfway back home, it seems he forgot to fill the tank. Who'd have thunk that about 20-ounces of beer-laced urine would only get a feller about a quarter of a mile?

The automotive industry isn't the only one that needs to take in account its customers! 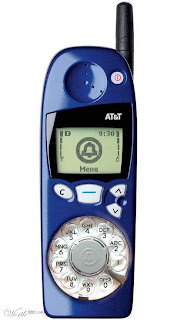 The electronics industry especially needs to think about the forgotten demographics, namely the elderly and the infirm. The development of their gadgets is moving at faster and faster speeds. One new product one month is obsolete and replaced with an up-dated version the next month.

The developers can read the small print and manipulate the small buttons without the aid of bifocals and magnifying glasses. Not so many of us baby boomers !

I suggest a new cell phone which combines features of the old and the new. (A rotary dial would be nice!)

However, I'll draw the line at having the availability of "Guy Lombardo" and "Lawrence Welk" ring tones.

What about those ubiquitous PDAs ? Being palm-sized presents a problem up front. I focus again on the ability of certain group of us being able to read the buttons as well as being able to manipulate them with arthritic fingers. 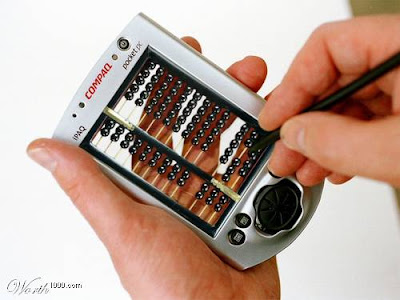 Voila! I give you the newest miracle for the calculat-ion of your expenses, the Electronic Abacus ! There is no hard-to-read LCD screen, no tiny buttons, and no need for batteries. Just slide and count!

No.969
Curmudgeon responsible for this post: Hale McKay at 10:51 PM

Damn! Just when I was about to break out my slam-dunk moneymaker, you have to invent it one step ahead of me. Rats!

Which one, Hoss? The Rotary Cell Phone or the Electronic Abacus?