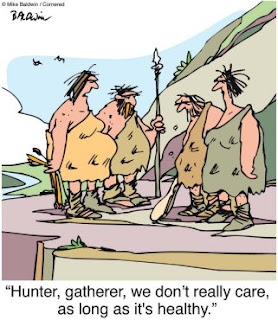 (I received this in an e-mail from my sister Diane in Huntington, West Virginia. All I did was to copy it and add the toons.)

There is not one dirty word in it, and it is funny.

The Smiths were unable to conceive children and decided to use a surrogate father to start their family.

On the day the proxy father was to arrive, Mr. Smith kissed his wife goodbye and said, "Well, I'm off now, the man should be here soon."

Half an hour later, just by chance, a door-to-door baby photographer happened to ring the doorbell, hoping to make a sale.

"Oh, no need to explain," Mrs. Smith cut in, embarrassed, "I've been expecting you." 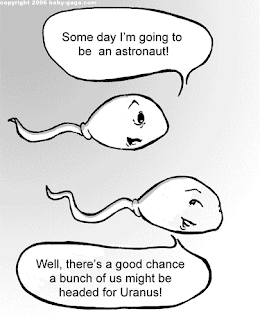 "Have you really?" said the photographer. "Well, that's good. Did you know babies are my specialty?"

"Well that's what my husband and I had hoped. Please come in and have a seat"

After a moment she asked, blushing, "Well, where do we start?"

"Leave everything to me. I usually try two in the bathtub, one on the couch, and perhaps a couple on the bed. And sometimes the living room floor is fun. You can really spread out there."

"Bathtub, living room floor? No wonder it didn't work out for Harry and me!"

"Well, Ma'am, none of us can guarantee a good one every time. But if we try several different positions and I shoot from six or seven angles, I'm sure you'll be pleased with the results."

"Ma'am, in my line of work a man has to take his time. I'd love to be in and out in five minutes, but I'm sure you'd be disappointed with that." 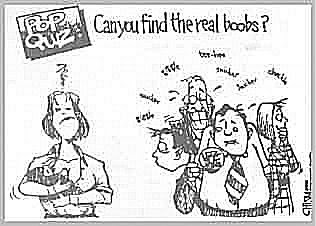 The photographer opened his briefcase and pulled out a portfolio of his baby pictures. "This was done on the top of a bus," he said.

"Oh my God!" Mrs. Smith exclaimed, grasping at her throat.

"And these twins turned out exceptionally well - when you consider their mother was so difficult to work with."

"She was difficult?" asked Mrs. Smith.

"Yes, I'm afraid so. I finally had to take her to the park to get the job done right. People were crowding around four and five deep to get a good look."

"Yes", the photographer replied; "And for more than three hours, too.

The mother was constantly squealing and yelling - I could hardly concentrate, and when darkness approached I had to rush my shots.

Finally, when the squirrels began nibbling on my equipment, I just had to pack it all in."

Mrs. Smith leaned forward. "Do you mean they actually chewed on your, uh...equipment?"

"Oh yes, Ma'am. I need to use a tripod to rest my Canon on. It's much too big to be held in the hand very long."

Finally, from my daughter, Gretchen, here is a tale of suspense and ...

They were together in the house. Just the two of them. It was a cold, dark, stormy night. The storm had come quickly and each time the thunder boomed he watched her jump. She looked across the room and admired his strong appearance...and wished that he would take her in his arms, comfort her and protect her from the storm... She wanted that...more than anything.

Suddenly, with a pop, the power went out. She screamed. He raced to the sofa where she was cowering. He didn't hesitate to pull her into his arms. He knew this was a forbidden union and expected her to pull back. He was surprised when she didn't resist but instead clung to him.

The storm raged on...as did their growing passion.
And there came a moment when each knew that they had to be together. They knew it was wrong. Their families would never understand. So consumed were they in their passion that they heard no opening of doors...just the faint click of a
camera..... 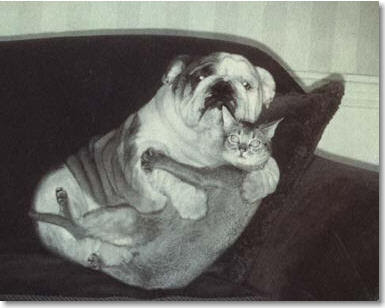 No.970
Curmudgeon responsible for this post: Hale McKay at 8:53 PM

ROFL!!! Both were funny, but especially the picture of cat and dog. Love it!