A Tale of Two Biddies

I have entered one of my posts The Reaver Jordan into a contest. The contest is being held at "This Eclectic Life" which can be found here. 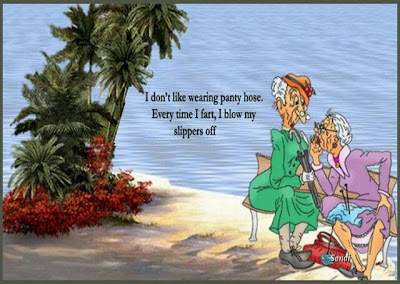 Agnes and Tillie were two spinsters who liked to sit on the benches by the lake next to the Senior Citizens building in which they lived. They enjoyed watching their neighbors who might be out for strolls. Most of all they enjoyed filling each other in on the daily gossip.
....On this particular day there were several police officers patrolling the facility. "My Lord! Look at all the fuzz," said Agnes.
....The second lady tugs at the hem of her mu mu and replies, "Sorry. It's so damn hot I didn't bother putting on my bloomers." Then she said, "What's with all the cops?"
...."Didn't you hear?" Agnes shouted to her nearly deaf friend, "There was a flasher on the grounds yesterday! He exposed himself to some of our neighbors."
....Tillie shook her head, "Some people have all the luck."

Three older ladies named Rose, Gertrude and Mildred were sitting on a park bench having a quiet conversation when a flasher approached from across the parking lot. The flasher came up to the ladies, stood right in front of them and opened his trench coat.
....Rose immediately had a stroke. Then Gertrude also had a stroke.
....But Mildred, being older and more feeble, couldn't reach that far.

"It's so sad about Mildred in 407, isn't it? She ended up in the hospital after her ordeal," Agnes said to her friend.
....To which Tillie narrowed her eyes and responded, "How so? You've seen one, you've seen them all."

Poor Mildred was a 93 year-old woman who was particularly despondent over the recent death of her husband Earl. She decided she would just kill herself and join him in death.
....Thinking that it would be best to get it over with quickly, she took out Earl's old Army pistol and made the decision to shoot herself in the heart since it was so badly broken in the first place. Not wanting to miss the vital organ and become a vegetable and burden to someone, she called her doctor's office to inquire as to just exactly where the heart would be.
...."On a woman," the doctor said, "your heart would be just below your left breast."
....Later that night, Mildred was admitted to the hospital with a gunshot wound to her left knee.

At that moment Sarah who lived on the sixth floor joined the duo on the bench. After exchanging pleasantries, the new arrival acknowledged that she'd heard about the flasher.
...."Dammit, I wanted to stay in tonight and watch some television!" she exclaimed.
....Tillie turned to her and said, "Why, did something come up?"
...."You never know! That flasher might come back!"
....Tillie nudged the woman next to her, "Agnes, weren't you accosted by a pervert a while back?"

Agnes nodded and shuddered, "Oh dear me, yes. It was just horrible. I was walking downtown and turned into an alley by mistake. He was hiding in the shadows and told me to give him all my money."
...."Good lord," said Sarah, "What ever did you do?"
...."I told him I had no money. But he insisted that the money was in my bra. He ripped open my blouse and started feeling around in my bra. I told him again that I didn't have any money on me."
...."How awful! What happened next? Did he just run away?"
....Agnes shook her head and continued, "He was persistent, I tell you. He hiked up my skirt and began groping inside my panties. I reminded him again that I had no money!"
....Sarah was agape in horror, "Then he ran away?"
...."No, I told him that if he was going to keep doing that, I'd write him a check!" Agnes then lowered her head and added, "That's when he ran away."

Sarah began to look at Tillie rather oddly.
....Sensing the woman was staring at her, Tillie asked, "What is it? What are you looking at?"
....Sarah leaned forward and said, "Tillie, I thought something was wrong. Do you realize that you've got a suppository in your left ear?"
...."I have?" Tillie reached up and removed it from her ear and stared at it. Then she said to Sarah, "I'm glad you saw this thing. NOW I think I know where my hearing aid is!"
....Sarah stood up and excused herself saying, "I see the transportation van is here for Joe from the seventh floor."
...."Does he have a doctor's appointment?" Agnes asked.
...."Oh no, his family is shipping him off to a nursing home."
....Tillie shook her head sadly, "They feel he can't live by himself anymore?"
...."Yes, they caught him impersonating a police officer again."

Tillie sighed deeply and said, "When I think of all the times he stopped me for jay walking...He never offered me the Breathalyzer!"
...."Same here," replied Agnes.

Sarah who had been standing nearby said, "I just remembered something. Did you ladies read the latest quiz in Cosmopolitan?"
...."Yes," said Agnes, "the one where they asked who you would like to come back as when you die, if it were possible?"
....Tillie nodding said, "Me, I would want to come back as Sophia Loren."
...."Good choice," said Sarah. "My choice would be ... Madonna."
....They turned their attention to Agnes. "This one is easy. I'd want to be Sara Pipalini!"
...."Who?" asked Tillie looking perplexed.
...."Sara Pipalini!"
....Sarah was shaking her head in confusion, "I'm sorry, Agnes, but that name just doesn't ring a bell."
....Agnes reached into her purse and pulled out a folded newspaper clipping. She handed it to Tillie and crossed her arms across her chest. In turn both Tillie and Sarah read the article and began to laugh uncontrollably.
....Tillie handed the paper back to her and said, "No, my dear woman, the paper says it was the 'Sahara Pipeline' that was laid by 1,400 men in 6 months."

The sun had just slipped behind the horizon and there was a slight chill in the air. The three woman began their slow arduous walk back to their building. Tomorrow was another day.

No.1028
Curmudgeon responsible for this post: Hale McKay at 9:13 PM

Hoss, I just knew that the "gunshot to the knee" joke was your kind of joke.

I only came here for a minute (excuse the pun), but couldn't get away. That was a brill post, I,m still giggling....!Queenie