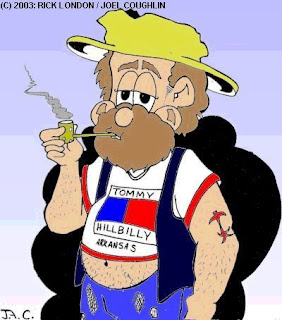 "Well knock me down and steal muh teeth!"
"Well, butter my butt and call me a biscuit."
"I'll slap you so hard, your clothes will be outta style."
"This'll jar your preserves."
"Cute as a sack full of puppies."
"If things get any better, I may have to hire someone to help me enjoy it."
"Gooder than grits."
"It's so dry, the trees are bribing the dogs."
"It's been hotter'n a goat's butt in a pepper patch."
"Wintery roads are said to be "slicker than otter snot."
"A bothersome person is "like a booger that you can't thump off."
"When something is bad then you say, "that ain't no count."
"If something is hard to do, it's "like trying to herd cats."
"A hectic schedule keeps you "Busier than a cat covering doo-doo on a marble floor."
"She's uglier than homemade soap."
"Your momma's so fat, when she got on the scales to be weighed, it said 'To be continued'."
"He fell out of the ugly tree and hit every branch on the way down."
"Uglier than a lard bucket full of armpits."
"The wheels still turning, but the hamsters dead"
"I'm just about as welcome at my inlaws as a hair in a biscuit."

(Here's one my Grandpa use to wear out say:)

A pubic hair is a wild rabbit.
True or False

Spread Eagle is an extinct bird.
True or False

Vagina is a medical term used to describe a Heart Attack.
True or False

A menstrual cycle has three wheels.
True or False

A G-string is part of a fiddle.
True or False

Anus is a Latin term for yearly.
True or False

Testicles are found on an Octopus.
True or False

Fetus is a character on Gunsmoke.
True or False

An umbilical cord is part of a parachute.
True or False

A condom is a large apartment complex.
True or False

An orgasm is a person who accompanies a church choir.
True or False

A diaphragm is a drawing in geometry.
True or False

An erection is when Japanese people vote.
True or False

A lesbian is a person from the Middle East.
True or False

Pornography is the business of making records.
True or False

Genitals are people of non-Jewish origin.
True or False

No.1052
Curmudgeon responsible for this post: Hale McKay at 8:07 PM

Stopped in from Peter's Blog.

I'll have to remember these when I interview.

They are all TRUE!

Thanks for the giggles!

Love it--I hear some of it often-- Congratulations on the Schmooze award Peter has given you.

You know my family, don't you? In fact, I think there's a good chance we might be related.:-)