In a Song: The True Meaning of Christmas

I think most everyone would agree that Christmas has become so commercialized that for many, its true meaning has been lost. If that wasn't sad enough, we now find ourselves in a "politically correct" environment. We have been forced to become hesitant to wish others a Merry Christmas.

I will not try to go into a lengthy discussion as to what Christmas means to me, because I don't see the point. I won't try to explain the concept of giving without looking to receive something in return. I don't think I could put into words the meaning of Christmas as eloquently as it appears in the lyrics of the song, The Christmas Shoes.

I will confess that tears come to my eyes everytime I hear this song. In fact, the same thing happens when I merely read the following words:

It was almost Christmas time, there I stood in another line
Tryin' to buy that last gift or two, not really in the Christmas mood
Standing right in front of me was a little boy waiting anxiously
Pacing 'round like little boys do
And in his hands he held a pair of shoes

His clothes were worn and old, he was dirty from head to toe
And when it came his time to pay
I couldn't believe what I heard him say

Chorus:
Sir, I want to buy these shoes for my Mama, please
It's Christmas Eve and these shoes are just her size
Could you hurry, sir, Daddy says there's not much time
You see she's been sick for quite a while
And I know these shoes would make her smile
And I want her to look beautiful if Mama meets Jesus tonight

He counted pennies for what seemed like years
Then the cashier said, "Son, there's not enough here"
He searched his pockets frantically
Then he turned and he looked at me
He said Mama made Christmas good at our house
Though most years she just did without
Tell me Sir, what am I going to do,
Somehow I've got to buy her these Christmas shoes

So I laid the money down, I just had to help him out
I'll never forget the look on his face when he said
Mama's gonna look so great

Sir, I want to buy these shoes for my Mama, please
It's Christmas Eve and these shoes are just her size
Could you hurry, sir, Daddy says there's not much time
You see she's been sick for quite a while
And I know these shoes would make her smile
And I want her to look beautiful if Mama meets Jesus tonight

Bridge:
I knew I'd caught a glimpse of heaven's love
As he thanked me and ran out
I knew that God had sent that little boy
To remind me just what Christmas is all about 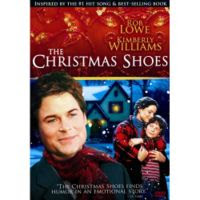 If you are unfamiliar with the song or just want to hear it you can visit the CBS site where you can click on links to either watch the music video or to simply just listen to the song. You can also read about the history of the song.

The song was turned into a best-selling novel and later made into a CBS made for TV movie. It is available in DVD (pictured at the left).

No.1209
Curmudgeon responsible for this post: Hale McKay at 5:26 PM

I say Merry Christmas, and let the chips fall where they may.

Oh what beautifully sad lyrics...
Hope you had a very Merry Christmas, Hale!

That song sucks!!! I bet you have precious moments figurines in your house. that is a stupid song

I hear that song is the lullaby your mother sings to you every night right after she tucks you in.