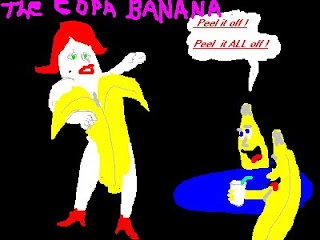 Sgt. Dick Bananas here. It was a slow night in the big city. My partner Bill Peels and I decided to take a ride to the entertainment district of the city known as Fruitopia.

The place to be was the Copa Banana, a Sundae Emporium which also featured live skinless exotic dancers. It was the place where they say the elite meet to eat and to be discreet while they beat their meat. (So they say.)

The world famous exotic dancer, Chiquita Banana was giving a special show that night. She had the reputation of making many a banana stand. I for one was anxious to get a good look at her kumquat. Also listed on the marque that night was Plantain Plenty, Tush Tangelo, Jubilee Cherry,Banana Splitz and Peaches.

The Copa Banana was actually half of a complex of two clubs. The side my partner and I were frequenting catered to the fruit crowd. The other half of the place, The Potato Skin Revue, provided adult entertainment to the vegetables. While customers are free to visit either side, as a rule fruit and vegetables don't get along. Yet, there have been more and more cases of inter-flora relationships.

The statuesque Plantain Plenty was taller than most of the strippers. As such she had more white flesh of her long lithe body to reveal as she tantalizingly peeled away her outer layers. I was tempted to unzip my peeling a bit to relieve the pressure.

Officer Peels was doing good to restrain himself at first. He started to lose control, however, when Peaches shaved her fuzz right on stage. Jubilee Cherry, world famous for her lap dancing, was the next performer. As luck would have it, she chose my partner to demonstrate her skills. Inexplicably, while she was bumping and grinding on his lap, he let loose with copious streams of his whipped cream.

Even though I offered to pay for the mortified performer's ruined costume, we were asked by management to leave. We were escorted to the door by two very large Ugli bouncers. I slapped Officer Peels up side of his head when we got outside and reminded him that he was supposed to keep it in his peeling. If I wanted to see Chiquita Banana's kumquat, I would have to come back another time - alone.

I looked up at the marque to see who was featured on the other side. Damn, I thought to myself, I would have liked to have seen the featured act there. It was an exclusive one night only appearance.

I probably could use my badge and my standing as an upstanding officer of the law, to gain admission to the show, but I decided it wasn't in the best interest of everyone involved. There is no doubt in my mind that my partner would make another mess, this time with his hot sour cream.

The decision was made for me, when a call came in for us over the radio. There was a reported assault in progress taking place a block from where we stood. Ironically, I slipped and fell by stepping on a banana peel. I slapped my partner up side his head again. The fool had forgotten to zip himself up after his failure to contain himself during the Cherry's act. I had slipped on the trailing part of his yellow uniform.

We arrived at the scene too late. The victim was dead. She had been sliced up pretty badly. She was an older banana, her pale yellow skin marked with the tell-tale familiar brown liver spots. Half of her was on the street next to a large bowl-shaped receptacle. The rest of her was strewn atop large woodchips in the container. She had been sliced to pieces. I thought to myself how cruel the perpetrator had been to leave the victim as such. The scene resembled that of a large bowl of Corn Flakes.

My partner suggested it must be the work of that dastardly murderer, The Dicer. I disagreed and said that I thought it was the work of a new killer. The victim had not been diced, she had been sliced! We both shook our heads in dismay, for we knew we now had both a Slicer and a Dicer on our hands.

I called into Dole Headquarters and asked them to send in forensics. I told him it was a definite homicide.

I looked at my partner and said, "Yep. We are on the hunt for a Cereal Killer!"

The Copa Banana cartoon above was my feeble attempt at art from Paint Works on my desktop. The Potato Heads cartoon is from the sydicated comic strip, "Bound & Gagged" dated 2/8/08.

(NOTE: - I have completed my evaluation of the author of this asinine post, and have determined that he is both demented and loony-toons. While he is placed in a rubber matted room and wearing a straight jacket, he should be henceforth unable to post such garbage ever again. - signed: Dr. Hugh G. Rection, MD)

Curmudgeon responsible for this post: Hale McKay at 9:33 PM

Many Thanks to Dr. Rection.