...And the Geek Shall Inherit the Earth 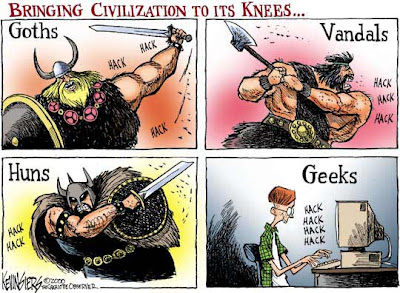 ...And the rest of us shall be at the mercy of Support Techs.

Things You Don't Want To Hear From Technical Support

"Do you have a sledgehammer or a brick handy?"

* "That's right, not even McGyver could fix it."

* "Looks like you're gonna need some new dilithium crystals, Cap'n."

* "We can fix this, but you're gonna need a butter knife, a roll of duct tape, and a car battery."

* "In layman's terms, we call that the Hindenburg Effect."

* "Please hold for Mr. Gates' attorney."
No matter how much you think you know, there is always someone who knows more! 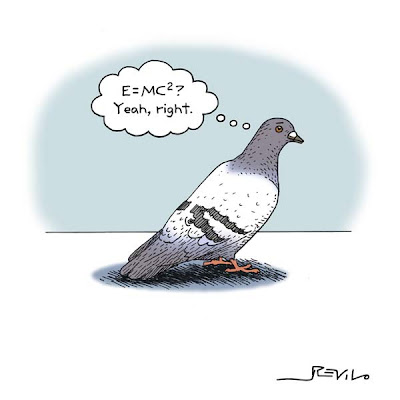 There was once a young man who, in his youth, professed his desire to become a great writer.
When asked to define "great" he said, "I want to write stuff that the whole world will read, stuff that people will react to on a truly emotional level, stuff that will make them scream, cry, howl in pain and anger!"
He now works for Microsoft, writing error messages.

The True History of the Internet
In ancient Israel, it came to pass that a trader by the name of Abraham Com, did take unto himself a young wife by the name of Dot. And Dot Com was a comely woman, broad of shoulder and long of leg.

Indeed, she had been called Amazon Dot Com.

She said unto Abraham, her husband, "Why doth thou travel far from town to town with thy goods when thou can trade without ever leaving thy tent?" And Abraham did look at her as though she were several saddle bags short of a camel load, but simply said, "How, Dear?"

And Dot replied, "I will place drums in all the towns and drums in between to send messages saying what you have for sale and they will reply telling you which hath the best price. And the sale can be made on the drums and delivery made by Uriah’s Pony Stable (UPS)."

Abraham thought long and decided he would let Dot have her way with the drums. The drums rang out and were an immediate success. Abraham sold all the goods he had at the top price, without ever moving from his tent. But this success did arouse envy.

A man named Maccabia did secret himself inside Abraham’s drum and was accused of insider trading. And the young man did take to Dot Com’s trading as doth the greedy horsefly take to camel dung. They were called Nomadic Ecclesiastical Rich Dominican Siderites, or NERDS for short.

And lo, the land was so feverish with joy at the new riches and the deafening sound of drums, that no one noticed that the real riches were going to the drum maker, one Brother William of Gates, who bought up every drum company in the land. And indeed did insist on making drums that would work only with Brother Gates’ drumheads and drumsticks.

Dot did say, "Oh, Abraham, what we have started is being taken over by others." And as Abraham looked out over the Bay of Ezekiel, or as it came to be known "eBay" he said, "we need a name that reflects what we are," and Dot replied, "Young Ambitious Hebrew Owner Operators."

"YAHOO", said Abraham. And that is how it all began, It wasn’t Al Gore after all.

Advice: Be careful in those chat rooms, guys - you never know who or what you are talking to. 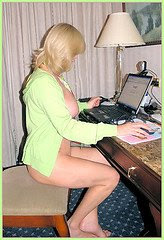 Satan greets him, "Welcome Mr. Gates, we've been waiting for you. This will be your home for all eternity. You've been selfish, greedy and a big liar all your life. Now, since you've got me in a good mood, I'll be generous and give you a choice of three places in which you'll be locked up forever."

Satan takes Bill to a huge lake of fire in which millions of poor souls are tormented and tortured. He then takes him to a massive coliseum where thousands of people are chased about and devoured by starving lions. Finally, he takes Bill to a tiny room in which there is a beautiful young blonde with an alluring look on her face, sitting at a table on which there is a bottle of the finest wine. To Bill's delight, he sees a PC in the corner.

As he turns around, he bumps into Lucifer. "That was Bill Gates!" cried Lucifer. "Why did you give him the best place of all?"

"That's what everyone thinks," snickered Satan. "The bottle has a hole in it and the girl hasn't."

"What about the PC?"

(It couldn't have happened to a nicer guy!)

Funny stuff! But I gots to know - do you have the addy for that chick with the big boobs? Hubba-hubba!

Does the Little Drummer Boy have a place in that opus?

That's all I need...surrounded by devilish geeks who know more about computers from Heckydarnpoo than I ever will...

I'm afraid I can't help you there. You'll have to find her on your own.

I'm not sure. But I heard his donkey is now an IT at Gateway.

What's harder - asking the Techs questions, or listening and trying to decipher their answers?

It's like the Lion King's "Circle of Life," jokes are borrowed from one site and then to another and so forth...