This Weed's For You!

Uncle Sam Says No To Weed.

In what could be a script for a Cheech & Chong movie, the federal government has threatened sanctions of fines against the Mount Shasta Brewing company. It seems that the Bureau of Alcohol Tobacco and Arms has a problem with the brewers of Weed Beer because of their bottle caps which read, "Try Legal Weed."

Art Resnick, a spokesperson for the bureau said that the bottle caps tell consumers to support an illegal drug. Vaune Dillman, owner of the brewery has appealed the decision. He said that the beer's labels have a picture of the Weed arch and of the city's founding father, Abner Weed. He added that they were dealing with a surname that's been used for hundreds of years. 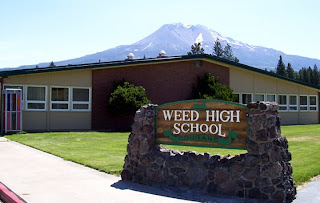 The brewery and the community of Weed, California, sits in the shadow of Mount Shasta. The town is also noted as the setting for John Steinbeck's "Of Mice and Men."

Dillman also said that he's outraged that Weed Beer is being singled out for using a possible pot play on words when Anheuser-Busch has used "Bud" - another name for marijuana - to promote its Budweiser line of beers. While not cited by the feds, the beer caps also are printed with "A Friend in Weed, Is a Friend Indeed."

Whatever the outcome, I do know that if ever I'm looking for weed, I'll find it at Mount Shasta.

Toro Lawn Products - The Feds will mandate that lawn trimmers shall not be referred to as "weed eaters." Also lawn mowers cannot be called "grass cutters."

Hopscotch - The schoolyard game can no longer be called by its familiar name because of the obvious references to alcoholic products and would promote such to small children. The Feds cite the obvious use of the word "scotch," as well as the reference to "hops," an ingredient used in making beer.

Hula Skirts - Even though it is tradtional to the Hawaiian Islands, there will be a crackdown on any and all attempts to refer to this article of native clothing as "grass skirts."

The Feds cite individuals like the man pictured at the right as an example of a person who has been using illegal drugs to the point of his sensibility being weakened. He was probably smoking his dress!

The annoucement in and of itself is not shocking. The fact that an announcement was even made is the shocking part of this story.

Chelsea Clinton has endorsed her mom! (Be still my heart, so earth-shattering this news!) I think the reporter(s) who bothered to print this and to release it to the wire services must have been tapping into some of the aforementioned wacky-tobacky! 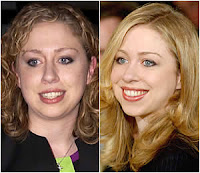 In making this announcement Chelsea said that she thinks her mother will make a better President than her father. "I think that she'll be a better President because she'll be more progressive and she's more prepared," she said at a campaign event at Duke University. "She'll just hit the ground running from Day One in a way that my father was not as equipped to do."

(Honestly Chelsea, if we really wanted to know how equipped your father is, we would go to a well-informed source such as Monica Lewinsky.) 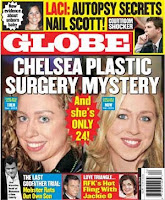 There is something we really would like to hear from you, Chelsea. If you are endorsing your mother, why is it that you are trying so hard not to look like her? The before and after pictures above suggest you are holding back a little secret.

Why does it take a trusted news source like The Globe for the American public to learn of your plastic surgery? Can breast enhancements be not far behind? ...And oh yeah, only your hairdresser knows for sure, right?

now, while i'd rather pluck my eyebrows out with a fork, i've not kept much in touch with the potential enhancements of young chelsea clinton... do you really think she fell under/tripped/paid for the knife on her face and other nefarious places?

seems to me that while she was a young and somewhat baby-fatty'd kid when this whole clinton thing started, she's finally grown into her skin, her eventual final height, and even her jawbone 'structure' seems to have settled in. now i'm no doogie howser (who COULD be!?) but while jawbones and cheeks CAN be inserted nowadays, she still seems fairly natural. and no, i don't wanna see her breasts.. augmented or not.

btw, thanks for swinging on over to my worlds. talk about a lot to take in... have you READ yours lately!?

i agree with the carrot on your sidebar... you do have a damned good blog.

In the Kansas City area a sod company known as the Grass Pad uses the song "The Grass Pad's high on grass" as its advertising ditty. It has been used for as long as I can remember.

While I agree with you asssessment in regards to the maturation process of the human species, the two pictures of Chelsea were taken only a month apart. Granted one photo was sans the Tammy-Fae-Baker-Effect and in the other she was sporting makeup, I don't think Maybelline works that efficiently.

Somebody, some ultra-conservative, had nothing better to do I suppose than to bring attention to her/himself for a crusade-du-jour of their own.

I'm ducking with ya.