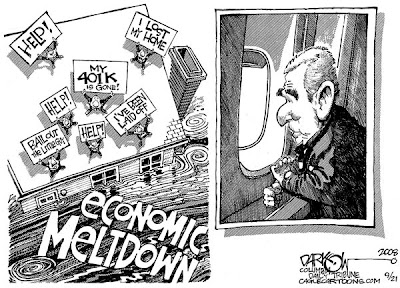 Not Sure For Whom To Vote ?
1. Open a new file in your computer.

3. Send it to the Recycle Bin.

5. Your PC will ask you: ‘Do you really want to get rid of ‘Barack Obama’? 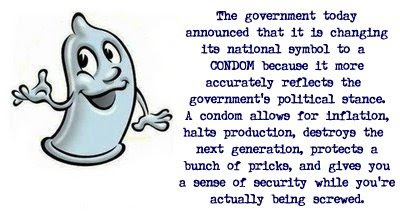 Until recently I had always thought that "F.D.I.C." stood for "Federal Deposit Insurance Corporation."

In light of the recent bank collapses, I learned that the letters actually equate to:
"F**king D**kheads In Charge."

It Says So In the Good Book
There once was a priest who had to spend the night in a hotel. He got to his room and opened up the Gideon’s Bible to page 1, then called the front desk and asked the hat check girl to come up to his room for dinner.

After a while he started making passes, she stopped him and reminded him he was a holy man.

So after a wild night of sex, the hat check girl asked to see where in the Bible it says it’s okay to have wild, passionate sex.

The priest picks up the Bible off the dresser opens to the first page where someone had written in pencil: “The hat check girl puts out!”

For a Reasonable Fee
The madam opened the brothel door in Cleveland and saw a rather dignified, well-dressed, good-looking man in his late forties or early fifties. 'May I help you sir?' she asked.

'I want to see Valerie,' the man replied.

'Sir, Valerie is one of our most expensive ladies. Perhaps you would prefer someone else', said the madam.

'No, I must see Valerie,' he replied.

Just then, Valerie appeared and announced to the man she charged $5000 a visit.

Without hesitation, the man pulled out five thousand dollars and gave it to Valerie, and they went upstairs. After an hour, the man calmly left.

The next night, the man appeared again, once more demanding to see Valerie. Valerie explained that no one had ever come back two nights in a row as she was too expensive. But there were no discounts. The price was still $5000.

Again, the man pulled out the money, gave it to Valerie, and they went upstairs. After an hour, he left.

The following night the man was there yet again. Everyone was astounded that he had come for a third consecutive night, but he paid Valerie and they went upstairs. After their session, Valerie said to the man, 'No one has ever been with me three nights in a row. Where are you from?'

'Really', she said. 'I have family in Columbus.'

The moral of the story is that three things in life are certain.

Doctorin' Ain't So Hard
A doctor in Duluth, Minnesota wanted to get off work and go hunting so he approached his assistant. "Ole, I am goin' huntin' tomorrow and don't want to close the clinic." "I want you to take care of the clinic and take care of all my patients."

The doctor goes hunting and returns the following day and asks: "So, Ole, how was your day?"

Ole told him that he took care of three patients.

"The first one had a headache so I gave him TYLENOL."

"Bravo, and the second one?" asks the doctor.

"The second one had stomach burning and I gave him MAALOX, sir," says Ole.

"Bravo, bravo! You're good at this and what about the third one?' asks the doctor.

"Sir, I was sitting here and suddenly the door opens and a woman enters. Like a flame, she undresses herself, taking off everything including her bra and her panties and lies down on the table and shouts: HELP ME - I haven't seen a man in over two years!"

"Tunderin Lard Yeezus, Ole, what did you do?" asks the doctor.

No.1475
Curmudgeon responsible for this post: Hale McKay at 8:52 PM

Before we flush Nancy, we need to ask if she'll personally pay for the buy-out. She could, you know.

I'll vote for Obama when I'm willing to see the Constitution and Bill of Rights flushed by George Soros, ACORN, and Ahmadinejad.

Say what you really mean. LOL.

Boy howdy I love me some hat check gorls.