A little boy goes to his dad and asks, "What is Politics?"

Dad says, "Well son, let me try to explain it this way:

I am the head of the family, so call me The President.
Your mother is the administrator of the money, so we call her the Government.
We are here to take care of your needs, so we will call you the People.
The nanny, we will consider her the Working Class.
And your baby brother, we will call him the Future.
Now think about that and see if it makes sense."

So the little boy goes off to bed thinking about what Dad has said.
Later that night, he hears his baby brother crying, so he gets up to check on him.

He finds that the baby has severely soiled his diaper.

So the little boy goes to his parents' room and finds his mother asleep.
Not wanting to wake her, he goes to the nanny's room. Finding the door locked, he peeks in the keyhole and sees his father in bed with the nanny.
He gives up and goes back to bed.

The next morning, the little boy say's to his father,"Dad, I think I understand the concept of politics now."

The father says, "Good, son, tell me in your own words what you think politics is all about."

The little boy replies, "The President is screwing the Working Class while the Government is sound asleep. The People are being ignored and the Future is in deep shit."

There you have it. Out of the mouths of babes - politics defined. 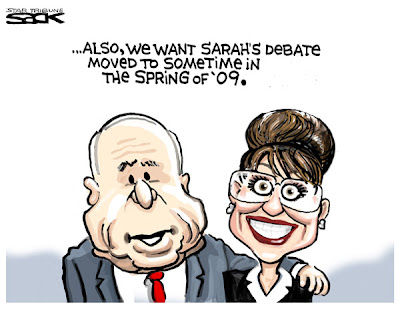 Jeepers, Creepers, Where'd You Get Those Peepers? 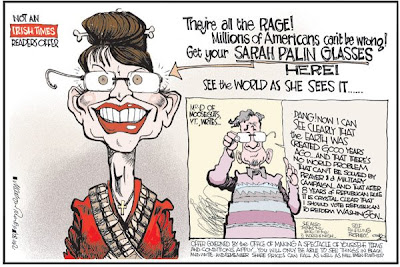 Lara Decanps, who works at Artsee Eyewear in New York, said women are asking, "Where did she get those glasses? They look so good on her. I want to find them."

While Palin's not the first famous woman to sport eyeglasses -- think Sally Jesse Raphael, Tina Fey and Velma from Scooby Doo -- insiders in the optical business say it's been a while since anyone has given their industry such a shot in the arm.

The frames, which cost about $375 without lenses, are even part of the buzz at New York's Bryant Park Fashion Week. "Like Jackie Kennedy wore with the pillbox hat, her glasses will be a revolutionary thing to wear," said one designer.

Beyond aesthetics, Palin has practical reasons for wearing the glasses -- like focusing in on her prey while out hunting moose in Alaska ... and maybe even those political animals in Washington. - ABC News 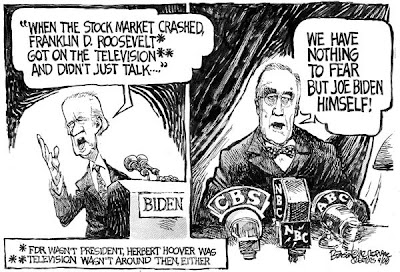 If Obama sticks his foot in his mouth,
Biden is there to chew it for him. 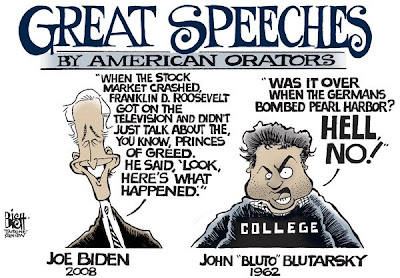 Separated At Birth?
No.1476
Curmudgeon responsible for this post: Hale McKay at 6:24 PM