These Won't Make You Mensa Eligible

THINGS YOU SHOULD KNOW BUT PROBABLY DON'T
1. Money isn't made out of paper, it's made out of cotton.

2. The Declaration of Independence was written on hemp (marijuana)
paper.

4. A raisin dropped in a glass of fresh champagne will bounce up and
down continuously from the bottom of the glass to the top.

5. Susan Lucci is the daughter of Phyllis Diller.

6. 40% of McDonald's profits come from the sales of Happy Meals.

8. The 'spot' on 7UP comes from its inventor, who had red eyes. He was
albino.

9. On average, 12 newborns will be given to the wrong parents, daily.

10. Warren Beatty and Shirley MacLaine are brother an d sister.

12. Orcas (killer whales) kill sharks by torpedoing up into the shark's
stomach from underneath, causing the shark to explode.

14. Donald Duck comics were banned from Finland because he doesn't wear
pants.

16. Upper and lower case letters are named 'upper' and 'lower' because
in the time when all original print had to be set in individual
letters, the upper case' letters were stored in the case on top of the
case that stored the smaller, 'lower case' letters.

17. Leonardo Da Vinci could write with one hand and draw with the other
at the same time. (Hence,multi-tasking was invented.)

18. Because metal was scarce, the Oscars given out during World War II
were made of wood.

19. There are no clocks in Las Vegas gambling casinos.

20. The name Wendy was made up for the book Peter Pan; there was never
a recorded Wendy before!

21. There are no words in the dictionary that rhyme with: orange,
purple, and silver!

23. A tiny amount of liquor on a scorpion will make it instantly go mad
and sting itself to death.

24. The mask used by Michael Myers in the original 'Halloween' was a
Captain Kirk's mask painted white.

25. If you have three quarters, four dimes, and four pennies, you have
$1.19. You also have the largest amount of money in coins without being
able to make change for a dollar (good to know.)

26. By raising your legs slowly and lying on your back, you can't sink
in quicksand (and you thought this list was completely useless.)

27. The phrase 'rule of thumb' is derived from an old Engl ish law,
which stated that you couldn't beat your wife with anything wider than
your thumb.

28. The first product Motorola started to develop was a record player
for automobiles. At that time, the most known player on the market was
the Victrola, so they called themselves Motorola.

29. Celery has negative calories! It takes more calories to eat a piece
of celery than the celery has in it to begin with. It's the same with
apples.

30. Chewing gum while peeling onions will keep you from crying!

31. The glue on Israeli postage stamps is certified kosher..

32. Guinness Book of Records holds the record for being the book most
often stolen from Public Libraries.

33. Astronauts are not allowed to eat beans before they go into space
because passing wind in a space suit damages it. I NEED TO REMEMBER
THIS.

34. George Carlin said it best about Martha Stewart. 'Boy, I feel a
lot safer now that she' s behind bars.. O. J. Simpson and Kobe Bryant
are still walking around; Osama Bin Laden too, but they take the ONE
woman in America willing to cook, clean, and work in the yard, and they
haul her off to jail.' 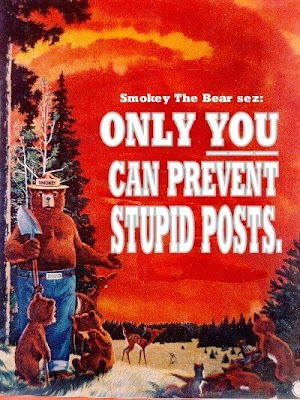 35. The National Forestry's mascot is named Smokey Bear and NOT Smokey the Bear.

No.1508
Curmudgeon responsible for this post: Hale McKay at 7:53 PM

I( don't know about the rest of them, but I do know that Susan Lucci is NOT Diller's daughter. That was on Snopes.com as a hoax.

Yep. Right you are. I left it on there wondering if anyone would catch it. Good catch, Judy.

And knowing that still won't get you in Mensa...hehehehe

Actually, the name Wendy was made up for the play. It came first ;)

For more Peter Pan adventure that's VERY different from all the rest, click my name!

I might get into MENSA if I run around with liquor, having scorpions self-destruct; but I guaran-dang-tee it'll disqualify me from PETA membership ;)

I was about to comment on Susan Lucci until I read the comments.

We have these kinds of lists posted in our planning are, so you're about to get your own space for this post.

You know, I never read Barre's book. All I know of Peter Pan and the characters I learned from the play starring Mary Martin and of course, the animated Disney film.

Thanks for the link that new novel sounds very interesting.

I knew the Susan Lucci thing was incorrect, and now Never Fairy's comment regarding "Wendy" has me wondering if others may be suspect.

Ouch! Imagine being rejected to PETA!

If those numbers are accurate, it is indeed scary.